Tough times for many at the moment including those in the charitable sector. I read in the recent Jay—Rod article that Pendleside hospice expect to have a £1m shortfall in their funding given the forced cancellation of key fund raising activities. It struck me that Adeola Friday is a thread as old a...

Mee to miss out on England debut (Covid 19)

Taken from David Ornstein’s column on The Athletic today: Will Mee miss out on an England debut? The cancellation of March’s internationals and the likely delay of Euro 2020 means some players who were close to being called up for England will have to wait — or may even have missed their chance alto...

View from our Head of European & International recruitment

Just found this on the Athletic. Know it will be of interest given our European scouting progress was questioned again during January. - - - - The January transfer window closes in six days, while in four hours, and 50 miles north, Ian Butterworth’s former club Norwich City will take on his current ...

I would have liked us to be the one signing Luke Matheson for £1m from Rochdale.
Small fry by even championship standards and a lot of potential to be playing first team football aged 17.

Re: Brownhill having medical 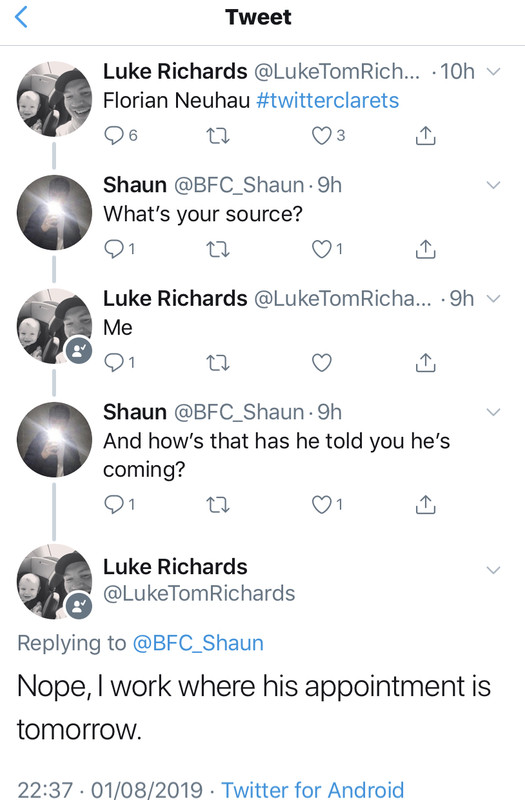 Richardsbfc has previous for making up nonsense.
Remember this from back in August?


Afew less syllables in the first line. Makes it abit easier to sing?
Other than that it’s nice & simple.

Don't know about the squad but there haven't been regular changes with the manager. Mark Warburton left in summer 2015 because they couldn't agree with the way they were approaching things. He was replaced by Marinus Dijkhuizen but he only lasted two months into the season. After a short period wit...

Really interesting read about Brentford and how they have set up their pathway to the first team supplemented by their scouting network domestic & abroad for both first team and B team. Their strategy is seemingly working despite regular changes to management and playing staff. Shows there can be me...

Why you shouldn’t buy anyone in January (long read)

Why you shouldn’t buy anyone in January - Jack Pitt Brooke (The Athletic) Maybe Mike Garlick has got it right after all?: “In boardrooms around the country this month, the same question will be asked: “Can he keep us up?” Nothing else matters to half the teams in the Premier League, given the money ...

Re: The chairman’s comments on the transfer situation

I think Dyche’s latest comments on Mike Rigg and transfers from the Burnley Express (Chris Boden) are pretty clear on why he doesn’t think we’ll sign players this window - 5/6 targets?! Described elsewhere as a postage stamp. We’re looking for value on players, and if we can find that, we spend it, ...

Re: The chairman’s comments on the transfer situation

From that moment some of our Board, perhaps not all, have been seriously uncomfortable with the situation which has resulted in a real reluctance to venture into the transfer market in the last four windows to purchase players good enough to go straight into the first team. So we then take the foll...

Re: Best DISCO Record of all time...

Nile Rodgers at his best.

According to David Ormstein on the Athletic.
Do we believe it?

My dad chorleyhere had his op on Thursday and was back at home yesterday evening looking very tired but pleased to be back in familiar surroundings. It’s his birthday today so whilst he can’t be sat next to me on the Turf I’ll be shouting the boys on extra loud to try and help bring home the points....

Well done Saints. Let’s hope our new coach continues our domination in the years to come.

Also big miss for Makinson not touring with GB Lions. He did well to play on with that injury.

Re: Clarets for Foodbanks v Norwich

bring a tin for a Burnley win!
I’ve got mine ready.

Re: BRING A TIN FOR THE BIN

I manned one of the Belvedere road bins. Lots of very generous donations including your own Cricketfieldclarets. And we’ll done to the scousers who donated £120+ from the collection they’d had on the coaches. Having seen their own collections go from strength to strength (now a transit vans worth at...

Re: Finally we put some of the 110m to good use

How many times has the chairman’s lounge been redone since our first season in the prem? How many times have the board had to wade through a mass puddle to enter the bob lord? This is clearly up there with leaking taps on the clubs list of priorities. Yet there can be no excuse that we don’t have th...

I never said that I knew we weren’t in for him.
Just that the combination of the reported fee and my assumption on his wages feels like it shouldn’t have been an unrealistic target for us.

Ill say it again on the thread because it’s probably been lost in all of the bickering but James McCarthy at £3m is something we could have done in our finance structure. Would have ticked the boxes for me.

Surprised we didn’t go in for James McCarthy. £8m and doubt ridiculous wage demands. Felt like an obvious choice to me.

Seems willing to do such on Twitter. Why is this forum any different?

Used to have a cracking high res picture taken afew seconds after Blake had hit the ball. His technique on the hit was impeccable and he’d stayed in shape to keep the ball down. What I used to love about the photo was the fans faces in the JHL - some are already celebrating, lots had jumped up. Beca...

Fitness game aside I wasn’t impressed with Mumbongo. He didn’t seem to be able to impose himself on the game. That said it looked like he went into trees behind the the sideline after being subbed on what looked like to throw up. Then he limped off when crossing the pitch at full time. So a hard nig...

Dave Jones is with the group in Portugal. Short term deal if we fail to land our CM targets?

This is the reply I got back from Sinead when I enquired whether seats could be collected on a weekend rather than working day for anyone who doesn’t live or work in Burnley: “Due to the high demand we have been inundated with similar requests from those who don’t live in/aren’t in Burnley on either...

To the tune of She’s Electric

Re: What I Really Liked About Dwight Today...

To the tune of She’s Electric.

Re: Brexit - What are you going to stockpile?

According to Mike Duff at a Cheltenham fans forum this week.
Has this already been covered?
Anyone aware of the circumstances?

Re: Goals from today

Credit to westy on the first. Both of his attempts looked goal bound and decent hits too. Credit to Vokes on the second. Fair challenge for the call which took their defender out of the game and allowed Lennon to sneak in. Credit to JBG on the third. Lovely cushioned volley. Deserved to go straight ...

Re: Father Jack alive and well .

Yes I’m still here thank you.
And so is my long running thread.

Good luck to him.
Hopefully will cut his teeth and could return as our manager one day.
Will he be as successful down there as Cotterill was?

Re: Not tempting fate

Can see from comments already on this thread that it must already be known which date the home and away legs would be played on if we get through.
Can somebody share please?

maybe our concern about Defour has increased since we started pursuing the deal. And we now need a signing to be ready to play immediately. Maybe the medical for clucas has shown a more serious injury than we’d expected. Maybe we’ve got other irons in the fire which we’re confident we can pull off w...

Hi Ian. Have you managed to get Filelinked working on your firestick? Seems like Techdoctor has moved away from DroidAdmin but the pin code 2468 isn’t working for me on Filelinked.
Also Mobdro can no longer load data and RedBoxTV no longer has audio pulling through. Any ideas? Thanks

Re: Can we afford to let Ben Mee leave for nothing?

Some interesting points in reply: I understand we can’t force him to sign a new contract. But I’d like to know whether it’s a question or not meeting his wage demands, or an outright refusal to sign again regardless of terms offered. I suspect it’s the former as last year he was our captain and a fi...

Can we afford to let Ben Mee leave for nothing?

With our Dawson & Mawson valued at 20m and then another 8m on wages over 3 years - Can we really afford to let Ben Mee leave for nothing? At what point does our experience of this year’s transfer window change our stance on Ben’s contract standoff? Big 10 days ahead. With another £120m on the line I...

Re: Our transfer dealings are poor

Come on Mik.
Admit you were humming it to yourself whilst on the m6 tonight...!

Was given an rendition of “Ade’s going to Europe” as the fans departed the CFS yesterday. Big smile and clearly enjoying his afternoon.
Just shows stewarding doesn’t need to be miserable and there can be respect from both sides.

Re: ARTICLE: Goalkeeper Stone leads the way with new deals

Just waiting for ablue to start saying that Agyei should be in our first team again...

Re: Billy Mercer and Pep

You call him Moan. But you don't have an agenda.
Of course not.
I present some balance to your view which you dismiss as arguing...

Remember this was the guy who wrote that terrible article to widespread criticism on here: http://www.independent.co.uk/sport/football/premier-league/burnley-brexit-britishness-sean-dyche-premier-league-most-interesting-project-a8124456.html" onclick="window.open(this.href);return false; Shame he wa...
Search found 126 matches