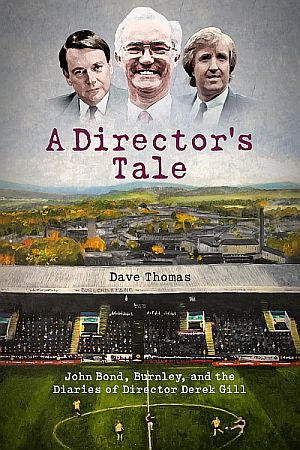 A Director’s Tale is the story of Burnley Football Club in the early 1980s, a time of short-lived success and then turmoil. With special access to the diaries of director Derek Gill, Dave Thomas brings you the unvarnished inside story, revealing what went on behind the scenes amid conflict with chairman John Jackson and manager John Bond.

These were torrid times involving, at first, a surprise promotion, then a relegation, then John Bond’s departure and another relegation.

This was a group of men who were all competent and professional in their own fields – Jackson was a barrister, Gill an accountant – but they became a toxic mix in the boardroom.

The Bond season has gone into the Turf Moor history books as one of the most damaging. His name is much derided in Burnley today, but he was only a part of a bigger problem.

The Gill diaries provide a unique opportunity to see – warts and all – the workings and machinations of boardroom politics. This is a story of failure and acrimony.

This is a story of blame, failing relationships, politics and turmoil. It shows how things can quickly go wrong when the personalities of the key decision-makers at a football club are very different.

Read and find out about:

« Referee confirmed for Tottenham game
A late, late show in the morning at Scunthorpe »