A draw at Millwall despite blind as a bat referee

Burnley travelled to Millwall in 1972 and a point against the struggling London side was not only enough to keep us top of the league but we even increased that lead to two points with second place QPR losing for just the second time. 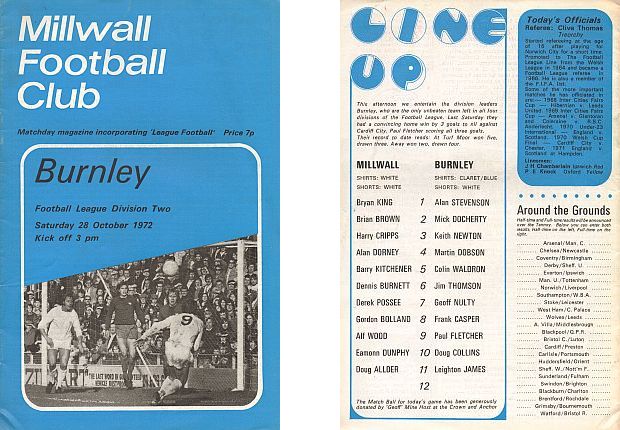 Resigning and suspended headmistress Miss Rosalind Gregory was still making the news. Having been suspended for advocating giving children cigarettes and alcohol she did a disappearing act and was eventually found wandering around Aylesbury in Buckinghamshire in a distressed state. The police were called and her sister travelled down to collect her with Miss Gregory again confirming, on her return, that she would be appealing against her suspension.

There was some very sad news of one Burnley boy aged just 13 who took his own life. It was a tragic story of a boy who simply couldn’t come to terms with the sudden death of his dad six months earlier. He was found by his elder brother who immediately went for help, but it was all too late. His school headmaster was in shock and said that the boy was the last person he would have ever expected this to happen to, such a lively character and full of enthusiasm for activities at school.

A Burnley man found himself in court after driving down Red Lion Street, a one way street, in the wrong direction. For failing to conform to a one way order he was fined the princely sum of £2 but his problems didn’t end there and there were things he probably should have checked prior to getting behind the wheel. The court also issued fines of £5 for having no driving licence, £10 for having no insurance and a further £30 for driving with too much alcohol in his blood. With costs it came to a total of £59.20 and a 12 month driving ban.

The cost of a subway was big news forty years ago and this had nothing to do with foot long sandwiches. The town council’s Finance Committee was stunned to hear that the cost of a subway under Centenary Way had risen by £14,000 in just one month. They might have been stunned but the General Purposes Committee members were incensed, so much so that they decided to protest to the Ministry involved and to lay a similar complaint before the Association of Municipal Corporations. The original cost of the subway had been estimated at £50,000 but now the confirmed figure was £87,136. The Borough Surveyor was instructed to speak to contractors to see if any reductions could be made.

We reported a couple of weeks ago how bad the situation was getting with vandalism, and after the latest cases suggestions were made to have anti-vandal  rangers on motor cycles employed. Councillor Edward Fisk said: “It is time that we did something drastic about this problem. People in Whittlefield and other areas are fed up to the back teeth with hooliganism and vandalism.” He said of the rangers: “They could go round the areas where these youngsters hang out and being on motor cycles they would be able to nip from one place to another easily and quickly.” Chairman of the General Purposes Committee, Alderman Tom Gallagher, confirmed: “It has been decided to call an early meeting with the police and everyone else concerned with this problem. It affects all the town and for that matter other towns as well. We are going to do all we can to combat the problem.”

There might have been no sign of Simon Cowell, but the talent shows were still around in 1972 with Burnley’s version of X-Factor and Britain’s Got Talent all rolled into one. It was more a sort of Burnley’s Not Got Much Talent in truth but was called ‘Top Trek’ with weekly heats held at the Cat’s Whiskers. Audience tickets were just 5p, giving some idea of the quality of the entertainment, with a trio providing the music and dancing. The Burnley Express and BBC Radio Blackburn had got involved with Mecca and the local newspaper revealed that the favourite to win the competition was Jimmy Lucas, a 60 year old harmonica player.

What do you do if you are seven years of age, can’t swim and you see your school friend potentially drowning? It’s a good question but Antony Holland, at North Street baths, had that dilemma. He didn’t hesitate. He jumped in with a lifebelt, got it round his friend and somehow helped him to the side and to safety.  It does beg the question, with this happening at a school swimming lesson, as to what the supervision was up to at the time.

The William Thompson Centre was in the headlines. Mr Ronald Bushby, a former mayor of Burnley, said the town had adopted a code of ugliness with this building. He hit out at the architects during a speech at the Burnley Anarchist Group. Meanwhile, Walter Winterbottom, who had laid the foundation stone, praised the town for leading the way in sport. “It will serve as a guideline to other authorities on how to build sports centres for the whole community and the family as a whole,” said the former England manager who was then the Director of the Sports Council.

Burnley Football Club revealed that finally, after over three years of hoardings, a new Brunshaw Road Stand was to be built. They confirmed that work would start within a few months and the cost would be £200,000. The stand would provided seating for up to 3,500 and would be available for season ticket sales for the start of the 1973/74 season. The club also confirmed that it would run the full length of the pitch, would include a directors’ box and a press box and, wait for it, toilet facilities for spectators.

Other phases, such as directors’ rooms, a social club and family rooms would follow but commercial manager Mr Jack Butterfield said: “We have not fixed any future date for phases two, three and four. This will be dictated by the financial situation, but a social club is definitely going to be built on the site.” It was good news. Turf Moor had not had four open sides since the end of 1967 when the old Cricket Field End was closed to build a new stand. Now, with the team top of the league the club looked to again be moving forward.

Even so, the trip to Millwall was a tough one, despite their lowly position in the league. Manager Jimmy Adamson confirmed the same team but with Billy Ingham replacing Alan West as substitute. Adamson said: “Millwall are not as bad a side as their position in the league suggests. We shall not be treating them as a bottom of the table team. They finished third in the league last season and with almost exactly the same team clearly have the ability to do much better than they have done so far this season.

“The crowd has a reputation of being very loyal and of giving great support to their team. We sampled this for the first time last year and we played well to get a draw. Millwall grabbed an equaliser in the last few minutes. I don’t expect the crowd to upset the team. With players like Keith Newton and Martin Dobson in the side we should be able to remain unruffled. We don’t underestimate Millwall at all. It will be a tough match.”

And a tough match it was as Burnley’s character was put to the test in a very unnerving atmosphere at the Den. We were not found to be lacking. We had to contend with many adversities; some fierce Millwall tackling, a hostile crowd, a poor bumpy pitch and a shocking referee who was prepared to give Burnley nothing. It was a day when we relied on some of the less publicised names in the team and we weren’t let down. Colin Waldron and Jim Thomson, for example, were superb at the heart of the defence as they had to contend with Millwall’s brawn.

Millwall’s tactics of hammering the ball forward went down a treat with the home fans but they hardly created a thing. Burnley had been the better side and it was something of a shock when we fell behind on 37 minutes. There looked to be no danger when Mick Docherty, who had won the ball from Doug Allder, turned and played it back to Alan Stevenson. Unfortunately, Allder got back in to fire in a shot against the goalkeeper and the loose ball bounced to Derek POSSEE who had the simple task of tapping it into an empty net.

It was a poor goal to give away and left us up against it but just over ten minutes into the second half we got the goal that earned us a point. Leighton James had a quiet afternoon for once but he played his part in the goal. He latched onto a ball from Dobson and fired in a powerful shot. It was blocked but ricocheted to centre forward Paul FLETCHER who hit a fierce shot into the corner from 12 yards out. We were comfortable until the last ten minutes when Millwall threw everything at us. We pulled players back and defended superbly for what, in the end, was a well earned point.

Now to the referee, a certain Mr Clive Thomas, from Treorchy. This was the referee who always wanted to be the star turn and had even designed his own kit. Peter Higgs writing in the Burnley Express blasted his performance and said: “HIs handling of the match left plenty to be desired. He booked Mick Docherty for saying nothing more than ‘Oh No’ when a foul was given against him, yet took no action when Dunphy dragged back Collins by the shirt. Mr Thomas also took the names of Collins and James but took no action against Millwall players for similar incidents.” Adamson summed his performance up very well. “For their sins he was as blind as a bat. For our sins he had the eye of an eagle.”

Still it was a point well earned.

The good news for Burnley was that none of the three teams immediately behind us in the table were able to win. Aston Villa went into the day in third place but could only draw 1-1 at home against Middlesbrough. Second place QPR went down 2-0 at Blackpool, only their second defeat of the season, and Nottingham Forest won 2-1 at Hillsborough against fourth place Sheffield Wednesday. It left us two points clear of both QPR and Villa with a trip to Middlesbrough a week later, a side that had already drawn 0-0 at Turf Moor.

Shock result of the day was Cardiff’s 3-0 win against Preston although it wasn’t enough to see them climb off the bottom. It needed Burnley to have beaten Millwall for that to happen.