A first home goal of the season and another point

Having scored a first league goal at the seventh time of asking at York, Burnley notched their first home league goal of the season on this day in 1997 in coming from behind to draw 1-1 against Preston North End.

Ahead of the visit of Preston, the Burnley Express front page headlined with news of a dog attack. We’d had an incident just a few weeks ago when a dog had to be put down but this was something entirely different; it was the dog being attacked. 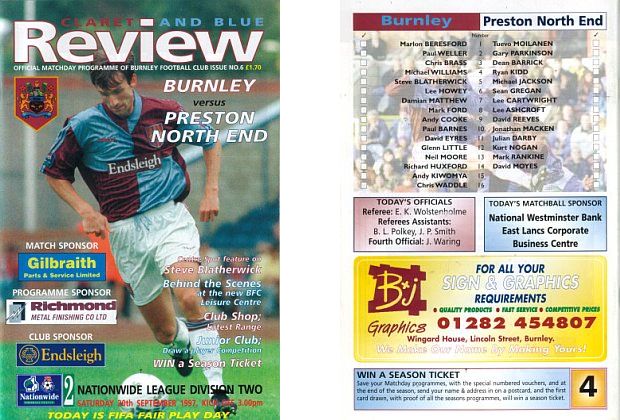 I’ve never been a dog owner but this story, I can assure you, was a difficult one for me to read. A 15-year-old collie cross by the name of Abigail was subjected to a chemical attack that was so severe that vets were forced to sedate her for two days while working on the burns. Owner Deanna Heys said: “She’s so soft and so placid, how anyone can harm her I don’t know. It’s absolutely terrible what they did to her.”

It appears that someone had poured bleach on her back and was eventually able to return home and Deanna added: “She’s fifteen, partially blind and deaf. She’s suffering with what she’s been through the last few days.” Police were investigating the attack on Abigail who had been with Deanna and her family all her life.

It was good to turn the page of the newspaper and find some good news after that. Burnley man Kevin Whalley had suffered brain damage while saving his daughter from drowning. Alan Clarkson had been Kevin’s best man at his wedding and was definitely his best man again. Postman Alan run the London Marathon in just a few minutes over two and a half hours to raise money for Kevin. He’d already run the Manchester Marathon and was now set to add the New York Marathon to raise even more much needed funds for his best mate.

Baby Chantelle Ryan had just undergone another skin graft operation and, if everything was successful, there were reports she could come home during the following week. Having been badly burned when blazing ceiling ties fell onto her during the blaze at home, it was news not expected for weeks if at all, but it left her mum Roseann frantically trying to find the specialist equipment needed for her.

I’ve heard of business partners falling out, sometimes to the point where the business failed. It went beyond that for 45-year-old Kenneth Hanson who was charged with trying to kill his. Hanson elected to have his trial heard by a jury when he appeared before magistrates and a trial date was set for October.

Ahead of the visit of Preston came news that manager Chris Waddle had placed six players on the transfer list in an attempt to raise funds to improve his squad. The six were Marco Gentile, Nigel Gleghorn, Gerry Harrison, Ian Helliwell, Jamie Hoyland and Vince Overson. There had already been interest. Gleghorn had played a reserve game for Northampton while they took a look at him and Overson was set to join Shrewsbury on loan. York had expressed an interest in Gentile too. Waddle explained: “People ask why am I getting rid of the players we have put on the list. It is the only way I can generate transfer fees. I have got to move people out.”

Burnley were also looking for a new physio with Andy Jones having left the club to join former manager Adrian Heath at Everton. It was thought that his replacement was to be Nick Worth from Sheffield Wednesday.

There hadn’t been a goal scored in the first three home league games of the season, all three ending in 0-0 draws. Once again, we had to settle for a draw but at least we saw goals and were thankful on this occasion for an equaliser having fallen behind.

Waddle opted for a back four for the first time in the season and we started well. We might have gone in front too. Chris Vinnicombe forced Tepi Moilanen into action with a two handed punch ahead but it reached Paul Barnes who just couldn’t control his header which went over the bar.

Chris Brass under hit a back pass which allowed former loanee David Reeves in on goal but Marlon Beresford denied him. It was only a short lived escape and the player to score was the player who was receiving an enormous amount of abuse from the home fans. It was just a simple ball from Sean Gregan in midfield that released ex-Claret Kurt NOGAN and we all knew what was coming. He advanced with the ball and as Beresford came out, he slotted the ball past him.

It was not the sign of things to come. Burnley just about dominated after that and again Lady Luck wasn’t with us although you do sometimes have to make your own look. In 2022, he was interim manager for eight games and is now a member of Vincent Kompany’s back room team but a quarter of a century ago Michael Jackson was the defender who hacked down Mark Ford with Eddie Wolstenholme having the easiest of tasks in pointing to the penalty spot. Unfortunately, David Eyres smashed the penalty against the bar.

Things had got better once the manager came on. He was in superb form and passing Preston off the park as chances came and went. It was hard to believe we were behind at half time but we stepped things up even more after the break. Ford got in again and this time smashed his shot against the post. Barnes turned in the rebound but the goal was ruled out, somewhat harshly, for offside.

It was all Burnley. Andy Cooke shot wide and Preston defended resolutely, blocking no fewer than five on target shots. A Waddle free kick flew just over and it looked as if once more it wouldn’t be our day. Then, with ten minutes remaining, Barnes got onto a Damian Matthew ball in the corner. His cross was perfect for COOKE whose header left Moilanen clutching at fresh air.

As much as we tried, we just couldn’t get the winner. So, another draw but the Burnley fans left delighted with the team’s performance if not the result.

It was a day of seven draws in the division. Leaders Watford were held to a 2-2 draw at Gillingham and that allowed Northampton, 1-0 winners against Wigan to close the gap to two points.

We were still bottom of the league and now two points behind Plymouth and Luton. Grimsby, with one more point, were the other team in the relegation places.

Besides Nogan, there were two other goalscorers with Burnley connections and both for the same team. Luton were beaten 5-2 at home by Wrexham but their goals were scored by Steve Davis and Phil Gray.