A first trophy of the season for Burnley

With the first team in fourth place in the First Division and closing in on leaders Tottenham Hotspur, it was the reserves who won the club’s first trophy of the 1959/60 season, defeating Manchester United in the Lancashire Senior Cup Final. 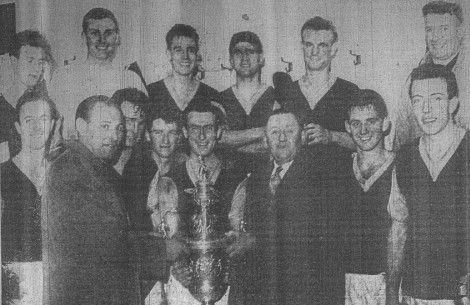 It was the fourth time the impressive Lancashire Senior Cup Trophy had resided in the Turf Moor boardroom and manager Mr Harry Potts, who had been a member of the 1950 team that won the competition, was proud of the brilliant first half display of his up and coming stars who led United a merry dance in the Turf Moor mud. Burnley were more confident than United in their control of a greasy ball. Lightening interchanges by the forwards and first time tackling by the defence proved far too much for the Busby boys.

Burnley’s was a great all round show. If one had to pick a man of the match it must have been Walter Joyce who on the form he showed just had to be a strong contender for any first team place that became vacant. JOYCE gave Burnley a 15th minute lead from a free kick, hitting the ball with tremendous force over Dave Gaskell’s upstretched arms. Twelve minutes later Andy LOCHHEAD scored with a well judged header from a Harris cross. SMITH got United’s first goal after 37 minutes but three minutes later LOCHHEAD rounded Gaskell with United appealing for offside and scored to make it 3-1.

United did come more into the picture in the second half but Jim Furnell was superbly confident and daring in his handling of the slippery ball. Gordon HARRIS increased Burnley’s lead after 81 minutes with a long shot from the wings which deceived Gaskell and five minutes from the end Albert SCANLON reduced the lead again for United but it was too little too late and Burnley were deserved 4-2 winners.