A fourth goalless game for Burnley

Burnley secured a second successive 0-0 home draw in Division 2, this one against Bristol Rovers, as the difficult start to the season continued.

There had been another tragedy in Burnley during this week which saw Emma Nelson and her two grandchildren Michael Wright and Rebecca Marshall all lose their lives having become overcome by poisonous carbon monoxide fumes at Mrs Nelson’s home in Berry Street. 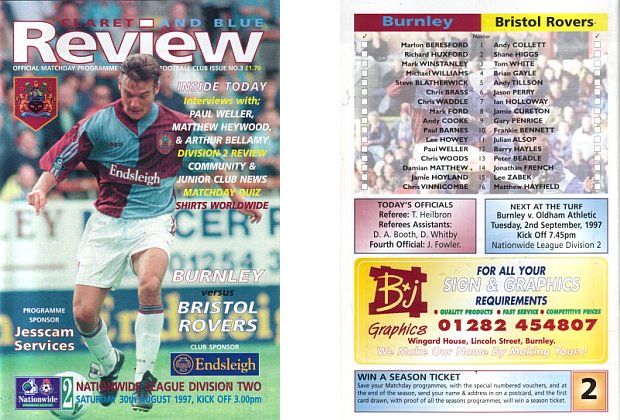 The tragedy had been caused by a faulty gas boiler. Detective Chief Inspector Clive Tattum explained: “Early indications suggest that a tap has been left running and no matter who fitted the boiler it would have resulted in the same outcome.” He added: “At the end of the day it’s a tragedy whichever way you look at it. We have to do our best to come up with the answers.”

There was some positive news about Chantelle Ryan who had suffered burns in a house fire. The 14-month-old Chantelle had undergone two skin graft operations to her hands and forehead and was now able to sit up and smile.

Local motorists received the bad news that the Westgate link road had again been placed on the backburner with county council chiefs still looking at ways of financing the scheme. With all hope of attracting private finance ruled out, the county council were looking at working with Burnley Borough Council to have it included in a transport infrastructure for the town centre. The link road, which was to cut out the bottleneck around the Mitre and Westgate, had initially been on the cards for around fifteen years with still no progress.

Finally, the town was saying goodbye to the Trafalgar flats. Just three weeks after the site was handed over to Wimpey, the bulldozers had moved in. The demolition was expected to take six months prior to the building of a community centre and new homes.

You wouldn’t think helping to decorate a friend’s home could land you in danger but it did for one Burnley couple. Robert Woodhead, an ex-boyfriend of the homeowner, saw a car parked outside and got the wrong end of the story. He knocked on the door and lunged at the decorators with a knife. Thankfully, no one was hurt and Woodhead received a sentence of eighteen months probation having been found guilty of grievous bodily harm and possession a dangerous weapon. Judge Bennett said it would be wrong to send him to prison.

There was excitement in town when signs went up at the Mechanics revealing that the Royal Family would be appearing there. It turned out that this Royal Family were a Queen tribute act.

Meanwhile, local amateur football had been thrown into chaos because of the state of the pitches. Three opening day Sunday League fixtures were moved from Towneley because ground staff had failed to mark them out or put goalposts in place. One club secretary also said that the grass was so long on one pitch that he could have lost his goalkeeper in the long grass.

Problems for local football and there were problems for Burnley who went into the fourth league game of the season with just one point from the first three and not a solitary goal for the supporters to celebrate. Those supporters did get news of a new ground to visit though with the Clarets having drawn Stoke in the League Cup with the second leg to be played at Stoke’s brand new Britannia Stadium.

One of the reasons for the lack of goals was Paul Barnes’ disappointing form in front of goal. He’d missed a number of chances you would expect him to put away, including a missed penalty, but manager Chris Waddle had no concerns that he would soon be back to his goalscoring best. The manager said: “He gets in good positions all the time, and also keeps his head up. He never hides after missing a chance, and is always there for the next one that arrives. I’m disappointed for him that he hasn’t got off the mark, but it won’t be long before he does.”

Looking forward to this game, Waddle referred to the League Cup win on the previous Tuesday: “We have got to maintain the level of performance that we saw on Tuesday. It was a good show against Lincoln. The lads worked very hard and we created a hatful of chances, which on another night would have given us a more comprehensive win.“ He added: “It has been said before, but if we can play the way I know we are capable of, I believe we are as good as anyone in this division.”

There was to be no repeat of the Lincoln win unfortunately against Bristol Rovers. We turned in what was described as a mind-numbing performance as we at least picked up another point from a 0-0 draw.

Without the suspended David Eyres and injured Andy Cooke, Waddle had to shuffle his pack. He gave young Ian Duerden a debut but his team failed to offer too much and we were again thankful to the brilliant Steve Blatherwick who stood head and shoulders above his team mates as our man of the match and his performance ensured a very quiet afternoon for Marlon Beresford.

Nigel Gleghorn, playing for the first time since February, went close from a Waddle free kick while Damian Matthew fluffed a couple of opportunities. In the second half, we even got a first sighting of Neil Moore who had been with us on trial and had signed just in time to be included.

Bristol Rovers hadn’t offered too much either until the final ten minutes when they pushed forward and put us under pressure, but it all came to nothing and ended in an awful 0-0 draw.

For youngster Duerden, it was his only appearance for the Clarets, his home town club. Richard Huxford and Gleghorn, two Adrian Heath signings, also made their final Burnley appearances in this game.

Bournemouth were the new league leaders having beaten Blackpool. They’d moved ahead of previous leaders Watford who were beaten at Preston and Bristol Rovers following their draw at Burnley. Carlisle were, thankfully, beaten at home by Northampton, thus keeping us off the bottom of the league.

Bristol City had moved up to fifth with a 3-0 home win against Wigan with a certain Shaun Goater netting a hat trick. He wasn’t the only player to bag three goals either, Roger Boli scored all three for Walsall in their 3-1 win against Southend. Over at Deepdale, and Preston’s win against Watford; it came courtesy of two Kurt Nogan goals, his first of the season.