A goal at last but no points for the 1997 Clarets

Burnley finally broke their scoring duck in the seventh Division Two game of the season but it counted for nothing with the game against York City at Bootham Crescent ending in a 3-1 defeat.

There was some bad news to report for swimmers in Burnley with the potential closure of the swimming pool at the Thompson Centre for up to six months. A bid had been made for Sports Lottery cash but the survey conducted as part of that bid discovered major problems. 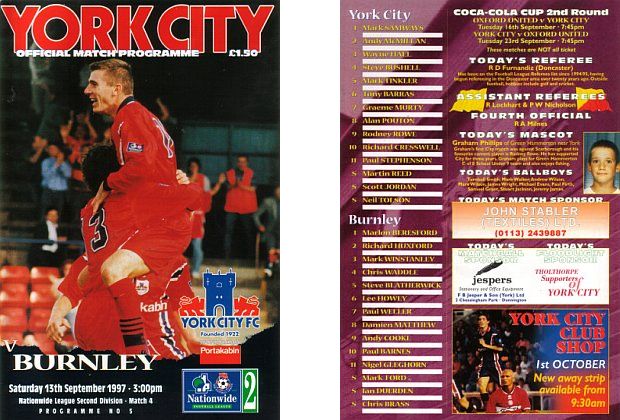 Burnley Council’s Recreation and Leisure Committee received a report that confirmed major repairs were required to the swimming pool surrounds and that the heating and ventilation systems might need to be replaced. It concluded that the work was essential and would mean closure for up to six months.

Added to other necessary work, it meant that it was going to cost around £4.5 million to ready the centre for the 21st Century. Head of the centre, Mr Andy Varnom said about the lottery bid: “If the bid is unsuccessful, it is estimated that the council will have to find in the region of £1 million for essential maintenance at the centre in the next few years. While income levels have been maintained, the deteriorating condition of the facilities could adversely affect income if major modernisation and upgrading is not carried out.”

We recently brought news of a new radio station to hit the airwaves during this month in 1997. 2BR had been granted a 28-day licence by the Radio Authority and was just a week away from launching. The Burnley Express had jumped in and teamed up with them to provide all the daily news updates during the one-month pilot. “We are pleased to be able to extend our news service to the people of Burnley. Hopefully, this will be the start of a developing partnership between 2BR and ourselves,” Express editor Chris Daggert said.

There was news of an ex-Claret and a former Burnley manager during the week but the two were in the news for very different reasons. Kurt Nogan, who had left Burnley for Preston earlier in the year, had been arrested in a tandoori restaurant in Preston after playing in their win against Grimsby. Mr Nogan, of Barnsay Farm, Barnoldswick was charged with being drunk and disorderly and was bailed to appear before Preston Magistrates on 8th October.

Jimmy Mullen, who had left his job as Burnley manager some eighteen months earlier, had been managing Sligo Rovers but had left when the club wanted him to move home to Ireland. He had now returned to playing in his mid-40s, joining Crooked Billet in the Burnley & District Sunday League. “It’s nothing special,” Mullen said. “I’m just keeping fit while I’m waiting to get set up somewhere. I have played a couple of games, and playing anywhere I am picked. Training and playing keeps me involved and it is all part of the enjoyment of football.”

Burnley was potentially looking to stage a Spanish Festival as part of the new tourism plans. It would work alongside an expanded National Blues Festival and the development of the second King Cotton Carnival. I don’t think the plans had local people rushing to the shops for paella ingredients and supermarkets reported there had been no upsurge in chorizo sales.

Police were called to a house in Carholme Avenue Burnley where they found a woman covered in blood. They also found a younger woman brandishing a knife. They were mum and daughter and daughter Pauline Mooring was shouting: “I hate you. I will kill you.” The problem was, both had been drinking heavily and had then started an argument. In court, Mr Graeme Tindal (defending) said that the two had contacted each other since and hoped the matter would be behind them when they next met at Christmas. Mooring was conditionally discharged for twelve months after admitting affray.

Liam Walsh, a 17-year-old former St. Theodore’s schoolboy, had joined the army and had his sights set firmly on being selected for the British Army Youth football team. A keen footballer, this had been a step for many others previously to a professional career in the lower division of the Football League or the Vauxhall Conference.

Burnley Football Club, via a letter in the Burnley Express from Jim Powers, had received a request to rename the North Stand as the ‘Diana, Princess of Wales Stand’ following her recent death. He said it would be welcomed by all in Burnley and that the club should use Alastair Campbell to persuade Prime Minister Tony Blair.

I don’t think the club took too much notice of that but striker Paul Barnes, ready to return to York to play against his former club, was hoping to find the net for the first time in the season. His manager Chris Waddle said: “He is looking sharp in training and he is the sort of player that is always a goal threat. Going eight games without a goal hasn’t got on top of him. I know he will score sooner rather than later, and I hope it is against York.”

It was against York; we finally got our first goal of the season in the league. Not as though it was of too much help with the home side coming back to beat us 3-1. He gave us an early lead, one we kept for over half of the game, only for the previously reliable defence to concede some soft goals.

With twelve minutes of the game gone, there was delirium in the away section of the ground, on the pitch and in the dug out as that goal finally came. Mark Ford started it. He went past Mark Tinkler and moved forward about twenty yards before releasing BARNES. The striker got between a defender and goalkeeper Mark Samways and then slotted home with his left foot. Over 2,400 Burnley fans had made the trip and were finally enjoying things.

We remained on top throughout the first half and could easily have extended the lead on more than one occasion. We didn’t and we paid the price.

York came out fired up for the second half and went at us. They missed three good chances before finally drawing level just past the hour. They won a corner taken by Tony Barras. It found ex-Claret Steve DAVIS (Mark I), who was making his debut having joined on loan from Barnsley, and he made no mistake with a diving header.

Marlon Beresford had no chance, but two minutes later, he made a real hash of a goal kick. It went straight to Rodney ROWE who lobbed the ball home. In the space of two minutes, we’d gone from 1-0 up to 2-1 behind.

We tried to get back into the game, and all of Michael Williams, Glen Little and Steve Blatherwick came close, but it was York who scored the final goal. Neil TOLSON went through three challenges before beating Beresford. Burnley fans just poured out as we suffered a fourth defeat of the season and the goal we’d finally scored meant nothing.

Watford went four points clear at the top of the league having beaten second place Chesterfield at Vicarage Road. Our defeat had now seen us fall two points behind the two clubs directly above us, Plymouth and Walsall.

Apart from Steve Davis, Ade Akinbiyi scored Gillingham’s winner at Bristol Rovers as they came from behind to win 2-1. They were the only two players with Burnley connections to score.