A Good Friday at Oxford

Four days after clinching promotion with the 2-0 win against Sunderland, Burnley were one of six teams involved in Good Friday action and came back from Oxford with two more points from another 2-0 win.

It had been the week when Burnley residents had, for the first time, voted in the county council elections. It had been a clean sweep for Labour who won all five seats, led by Alderman Thomas Gallagher, but it would only prove to be a hollow victory with all five debarred from making policy decisions on the area’s future. That was the inevitable outcome when Labour failed to gain control at County Hall against a Conservative dominated county authority. Alderman Gallagher said: “Although I am certain all parties will be in agreement on industrial issues our position will be hopeless as far as social and other area needs are concerned.” 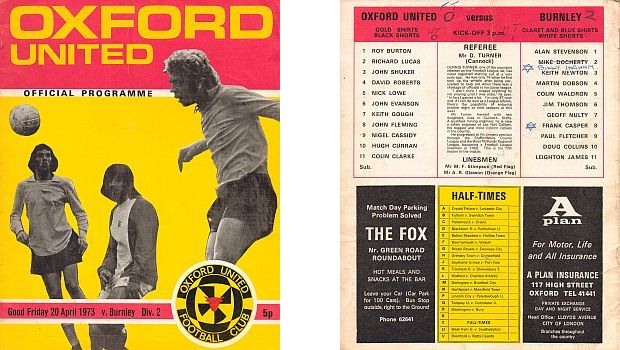 He added: “We can but try to do a good job in the face of this domination, but I cannot prophesy what we shall get in results. It will be hard work all the way. If there is a General Election before this new county authority starts working (in April next year) and there is a Labour Government we shall pressurise it into making NE Lancashire a metropolitan area with control over its own affairs.”

Health warnings on cigarette packets were a new thing in the early 1970s but that didn’t stop bingo players at the Empire Bingo Hall in St. James’ Street from smoking away and collecting their coupons. They had collected more than 60,000 of them to enable them to provide two chairmobiles for a new recreation centre for the handicapped being built in Temple Street. They had to ‘Give Order’ when the concert secretary of the Wheeltappers & Shunters Social Club, comedian Colin Crompton, arrived to present the first chairmobile, designed by Lord Snowden, to Mrs Sarah Ennis, chairman of Burnley’s Town Council’s Personal Services Group of Committees.

Local MP Dan Jones supported a Private Members’ Bill in Parliament to prevent the display of grossly offensive matter in public places although the Bill was withdrawn when the Minister of State for the Home Office, Mr Mark Carlisle, said they hoped to bring forward Government proposals to deal with the issue. Jones said the House of Commons had given momentum to the sleezy pattern that society seemed to have reached and said it was due to some poor decisions such as the approval of legislation making homosexuality legal, making divorce easier and by facilitating abortion. Jones warned of the spread of films dealing with black exploitation, sex (particularly that involving people of the same sex), violence and intolerance and asked: “Can we really wonder why it is that young people go wrong when these intolerable pressures are absolutely deluged upon them?”

The Burnley Express headlined with the news that it would be free admission at Turf Moor on Good Friday, a strange piece of news given that we were playing away. It turned out that there was to be music and drama round the cross as the story of the crucifixion was told.

We were on our way to the Manor Ground for our third ever visit there. Neither of the previous two had been a success. In the 1970/71 season we’d been hammered 3-0 in the FA Cup and one season later lost our first ever league game against Oxford 2-1. This time we were going as a promoted club and we’d had another boost when struggling Cardiff had held QPR to a 0-0 draw on the Wednesday, leaving us two points clear with both of us having four games to play.

Doug Collins was rested, and given the substitute role for this game, and so Billy Ingham moved from right back to the midfield with Eddie Cliff stepping in at right back for what proved to be his final game for the Clarets.

Burnley supporters had travelled to this strange little ground with countless stands in great numbers but for much of the first half it wasn’t to be the most enjoyable of games to watch in very poor conditions. The pitch was rock hard and during the first half there was little to enthuse the crowd of over 13,000. Neither goalkeeper had had much to do until we got our noses in front two minutes before half time.  Cliff swung over a cross from midway inside the Oxford half. Geoff Nulty and a defender both missed it and Frank CASPER controlled the ball neatly before scoring from inside the six yard box.

It changed the game. The second half was all Burnley and we tore Oxford apart time and again but Nulty, Leighton James, Martin Dobson and Paul Fletcher all wasted chances before we finally got the second with a superbly engineered goal. Jim Thomson advanced from his station in the back four to send James behind the defence with an astute through pass. While Thomson continued on a dummy run, James clipped a precision centre into the goalmouth where INGHAM headed firmly past Oxford goalkeeper Roy Burton.

Another win, and now we had to get back home quickly for the next game against bottom of the league Brighton 24 hours later knowing that two wins and a draw from the last three games would guarantee us the title. I’ve no idea why now, it makes no sense, but we had planned an overnight stop after the Oxford game and, us being us, it left us rushing to get home in time for the next game. We did, but there was not much time to spare.

We really were favourites now for the title after Cardiff had done us that massive favour. We had home games against Brighton and Luton to come and then a final game of the season at Preston.

They were coming thick and fast too with the two home games part of a three game Easter programme.

« Couch goal wins point against ESL Liverpool
Mondays in May »