A good Saturday for the Clarets when Maidstone came calling

With Aldershot’s demise taking us back to the top of the Fourth Division, we ensured we wouldn’t be losing that place any time soon as we came from behind to beat Maidstone United 2-1 at home in 1992.

There was some good news on the job front too in Burnley with Tenneco Walker having won a massive deal with Toyota and it was likely that it would bring around a hundred new jobs with it. The factory was to manufacture exhaust parts with the deal worth around £10 million per year. Managing director Mr Ray Jenkins outlined just how important this deal was. He said: “The automotive industry has been hit very hard by this recession, and if it wasn’t for this deal and the fact that we had so much space to expand it is debatable whether this factory would have survived.” 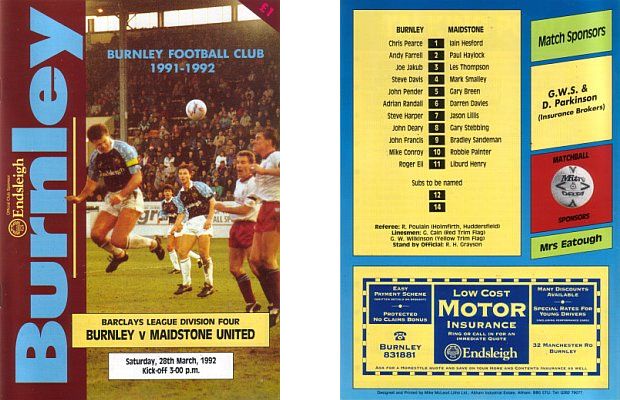 While that was good news for potentially a hundred workers, there was even better news for local hairdresser Dale Kelly. Having trained initially at Nelson & Colne College, 23-year-old Dale was working at Jazz Man Grooves in town but was soon to leave for Canada where he would be working for the world famous Vidal Sassoon. The excited Dale said he would be in Canada for a year but then expected to work in America.

The Poll Tax was rearing its ugly head again, this time with warnings from the council that services were at risk if people didn’t pay. They were ready to start prosecutions again with Borough Treasurer Mr Norman Smith telling a meeting of the Finance Sub-committee that clearance had now been given for court hearings to be resumed following a challenge on computer evidence being permissible.

We’d had another problem with a man having indecently assaulted a young woman and then a teenage schoolgirl. The first incident was on a dimly lit footpath near Burnley Central Station while the second, the attack on the teenager, was not far away from the first in Curzon Street. The attacker was described as between 20 and 30 and around 5ft 6ins tall. DS Peter McKendrick said the two incidents were similar and an inquiry had been set up at Burnley Police Station.

I’ve often heard the phrase ‘throwing the kitchen sink in’ when a team is going all out to get a goal to either win or draw a game but the said item was included in a haul stolen from a house in Every Street. Along with the sink, thieves stole a gas cooker, fridge, freezer, twin tub washing machine, gas fire, copper water tank and carpets. They even took the mixer taps from the sink.

One couple thought they’d found an answer to rising debts but things didn’t work out just as planned for Steven Stott and Christine Greenwood. Their plan was to report their car stolen, claim the insurance but keep the car after changing the number plates. Instead of being better off to the tune of £1,800, they landed themselves in court. Greenwood, who had no previous convictions, was conditionally discharged for twelve months but Stott pleaded guilty to stealing a Ford Fiesta and an Austin Metro and he also asked for an offence of obtaining £700 to be taken into account. He was remanded on bail for three weeks for the preparation of social inquiry reports.

Another man in court was 31-year-old Neil Linford who pleaded guilty to three burglaries and admitted seven more similar offences. It was all to feed his drug habit and he was now facing a custodial sentence. Mr Robert Crawford (defending) told the court: “Since he has been locked up this last three months he has been drug-free, and his health has recovered no end. He says he will now stay off drugs and apologises to his victims and to the court.” It didn’t wash with Judge Heather Steel who gave him prison sentences for all the offences, the longest of which was two years.

Back home after a win at Mansfield and a draw at Barnet, and one place higher in the league due to Aldershot’s demise, Burnley fans were expecting nothing less than a victory against lowly Maidstone but football doesn’t often work out like that.

Jimmy Mullen made one change to the team. He brought in new signing Robbie Painter who had been a Maidstone player less than two days previously; Roger Eli was the player to miss out and he took on of the substitute roles but would go on to play a big part. Andy Farrell was again at right-back in the continued absence of Ian Measham.

This was a game we should have won but never looked like winning only to take the points with two goals in the final thirteen minutes. Right from the start we got on top; John Francis had two chances in the first minute and a minute later Mike Conroy was just wide following a John Deary free kick.

Somehow Maidstone got to half time without conceding but there was a dramatic start to the second half when the visitors went in front within sixty seconds. After almost total domination in the first half, we made a mess of a ball from their right to our far post. It found its way back into the middle and was laid back for defender Ricky NEWMAN to hit home into the bottom corner.

Eli had come on for the injured Francis half way through the first half but Mullen made a significant change ten minutes into the second half with the introduction of Mark Yates for the disappointing Steve Harper. Yates played well, was strong in midfield and played a string of good passes but we still couldn’t get that equaliser. Goalkeeper Iain Hesford was outstanding for Maidstone but did get lucky once when a corner dropped into the net and he was somewhat fortunately given a free kick in his favour.

As we got more frantic, and they wasted more and more time, we got a chance. It was promising from Deary, very promising but Hesford again saved. Steve Davis won us a corner and then at the expense of a corner. That corner was cleared but then we won a free kick on the left. Deary took it and DAVIS found position A in front of the defence and swept home left footed.

It was all Burnley now. One shot was cleared off the line, Hesford made more saves and then, finally, with just three minutes remaining we went in front. Deary received the ball from a throw on the right and played a superb cross into the box after which the two substitutes took over. Yates perfectly headed the ball forward for ELI to control the ball on his left to smash home.

The drama wasn’t over. Close to the end, Maidstone won a corner on the left. Chris Pearce appeared to catch it before finding himself under players of both sides who were knocking seven bells out of each other. Where was the ball though? Don’t worry, Pearce had got it. However, Maidstone’s Liburd Henry got more than he bargained for and was sent off by referee Richard Poulain.

Even then, we nearly added a third with both new boy Painter and then Yates so unlucky not to score with long range efforts. It had been nerve jangling at times but we’d got the points and that’s all that mattered.

A delighted Jimmy Mullen said: “The main objective is to get promotion, that’s the be all and end all, to get up there and out of this division. If we can do that as quickly as we can in the next two or three games, we’ll have a couple of games then when we can maybe have a go for the championship.”

There was even better news for us as results from elsewhere came in. We’d kicked off level on points with Blackpool and two points ahead of Mansfield. Both were beaten. Blackpool went down 1-0 at Crewe and Mansfield suffered a 2-0 defeat at Gillingham.