A late, late show in the morning at Scunthorpe

Burnley came back from the dead to take a point in the morning kick off at Glanford Park against Scunthorpe United on this day in 1992, and held a three point lead at the top of the table.

Not often did a week go past without there being any mention of the poll tax, and here we were again with the council giving us some indication as to how much it would cost in the financial year 1992/93. The news was that it was expected to increase to £262 per person, an increase of £53, with residents told that £30 of that increase was due to losses on collections during the year, bringing with it an even stronger call for deliberate non-payers to be jailed. 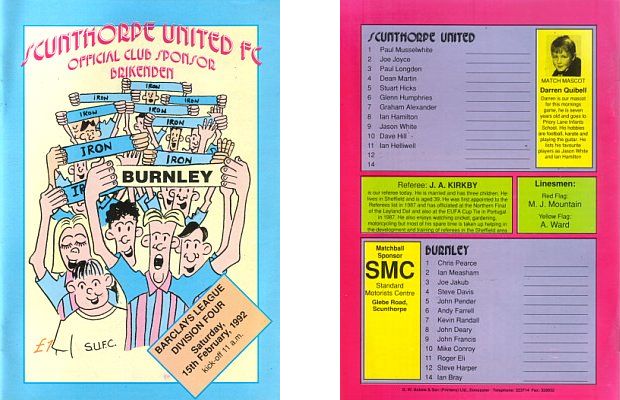 Borough Treasurer Mr Norman Smith conceded that the increases were quite dramatic but said: “If we make insufficient provision now for expected write-offs and losses we would have to make substantial reduction in services for 1993/94.” Councillor Gordon Birtwistle said it was scandalous that good payers were being asked to pay extra and he demanded more and stronger prosecutions. “I hope we send even more of them to jail,” he said. Police were called to the meeting to remove poll tax protesters and local MP Peter Pike spoke out accusing the Government of not caring about people who couldn’t pay their poll tax.

In October, in our review of the 6-2 win at Wrexham, it was reported that 46-year-old Cliviger farmer Albert Sutcliffe had been arrested for the murder of his wife Sarah. She’d been found dead in bed on 5th October 1991 and the subsequent inquest heard that it was as a result of two gunshot wounds to her head, one to the bridge of her nose and the other through her cheek. Husband Albert, appearing at Preston Crown Court over four months later,  denied the murder but following reports from two psychiatrists a plea of guilty to manslaughter was accepted. The hearing was now set to move from Preston to Manchester.

The Burnley Express reported that the town was beginning to reel from the effects of the recession with the biggest monthly jump in the number of people jobless. The latest bad news to hit the area was that Marks and Spencer were rationalising and that would mean 14 of the 80 employees to go at their printing and distribution plant in Burnley although a spokesman for the company claimed it had nothing to do with the recession.

Burnley had an ever increasing drug and AIDS problem and that was set to lead to the introduction of a major education programme. Part of that programme would be to increase the awareness of the public regarding the threat posed to health by drug misuse. Improved working arrangements between GPs, hospital and community services would be put in place to tackle the problem of drug abuse and services would include advice to women on child care and drug use in pregnancy; solvent and substance advice and counselling for HIV/AIDS along with confidential testing and information on safer sex.

Another serious concern was that of drink driving with figures released showing an increase in offences of 9% on the previous year. Head of the Pennine Police Division, Chief Supt. Allan Williams, told the Burnley General Licencing Meeting: “Despite the fact that there were nearly 700 negative breath tests, I have to report that once more far too many drivers are seemingly ignoring the ‘Don’t Drink and Drive’ message, and are continuing to put other people’s lives at risk. Again, as I said last year, those inclined to mix drinking and driving need reminding that the penalty, as well as involving automatic disqualification plus heavy fines, can also carry a term of imprisonment.” Mr Williams did, however, report a marked decline in offences of drunkenness.

The work on the continued pedestrianisation of the town centre was continuing to cause problems and none more than those encountered by Mr Maneer Saddique, owner of Jeans Junction in St. James’ Street. His trade had reduced significantly which had forced him to lay off staff, and to make matters worse, a digger then ploughed through his shop window costing him repairs of over £2,000 plus extensive damaged stock.

The case regarding the disturbances on Holbeck Street was finally over with the Englishman accused of firing shots at young Asians being found not guilty. He was cleared of all charges with the judge, Mr Justice Leonard, directing the jury not to bring verdicts on some of the charges because the shots had not been directed at the young Asians. He was finally free to leave court after some months.

For many Burnley folk, the Saturday meant an early departure for the 11:00 a.m. kick off against Scunthorpe, and, as Clarets’ director Clive Holt had warned, there was an attendance way below what might have been expected due to the kick off time.

Jimmy Mullen was able to name an unchanged team from the one that had comprehensively ended Northampton’s ten game unbeaten run with a superb 5-0 victory, but he admitted expecting a tough game at Glanford Park against a Scunthorpe side in seventh place in the table. Mullen’s prophecy of a difficult game came true as the Clarets found themselves two goals behind for the second away game in succession only to come back to draw just as they had done at Walsall in that previous game. This time, however, we left the equaliser until even later in the game – much, much later.

We should never have found ourselves two goals behind but all credit to the team who, once again, showed all their fighting qualities to grab a point when all looked lost against a Scunthorpe team who lost their goalkeeper during the second half. We really were putting on a series of late, late shows and patience was becoming the chief virtue of the travelling Clarets.

Burnley simply dominated the first half, or the first half an hour at least, and it was right on the half hour when Scunthorpe took a shock lead totally against the run of play. The game had got a bit untidy and Scunthorpe were trying to rough things up a bit. Referee John Kirkby seemed oblivious to it but when he awarded Scunthorpe a free kick on their left it proved vital. Graham Alexander hoisted it into the box for Ian HELLIWELL to head home totally unmarked at the far post. It was a shock to the big Burnley support.

The goal had been scored right in front of the away fans and there was worse to come six minutes later. Another ball into the box looked to be causing no danger. Goalkeeper Chris Pearce had a punch at it. It didn’t clear the area and that allowed Alexander to have a swing at it. It fell nicely for Jason WHITE who just waited around for the ball to reach him before drilling it home. It was a scrappy goal, but a goal nonetheless and incredibly we went in at half time with a two goal deficit that we hardly deserved.

We were in need of some good fortune and thankfully Lady Luck pulled on a yellow shirt for the second half. Within a minute of the restart Kirkby awarded Burnley a penalty. Roger Eli, looking to get to Steve Harper’s cross, was upended by Stuart Hicks. It looked a little harsh but on closer scrutiny Hicks didn’t get a foot on the ball. Mike CONROY did though; His penalty halved the deficit and launched a rescue bid amidst rising temperatures.

The game was getting out of hand. Twice John Francis had his heels clipped and eventually the Burnley striker lost his cool and reacted angrily. The referee was waving yellow cards around but losing control. It got worse as two players clashed off the pitch. That boiling point was reached after 63 minutes. Scunthorpe’s debutant, on loan goalkeeper Chris Marples didn’t care for Conroy’s eager attentions when the Burnley hit man typically set off after a lost cause. Conroy was caught in the face and Marples was facing an unscheduled departure. In fairness to the ‘keeper, his head cracked against the hoardings. He was entitled to feel annoyed but he wasn’t entitled to show it. Conroy got a yellow card; Marples a red. Hill got the ‘keeper’s jersey.

We had almost half an hour now against ten men and a team with no goalkeeper, surely we’d go on and win it. It just didn’t happen. Hill dived at Steve Harper’s feet and he continued to deal superbly with balls Burnley were putting into the box. With five minutes remaining the stand in keeper saved brilliantly from John Deary and when the game reached 90 minutes it was still Scunthorpe who led 2-1.

There were no added time boards back in 1992 and so we’d no idea how long we would have. Given the stoppages it was expected to be lengthy with some suggesting as much as eight minutes, but there was no way it was going to be that long. We pushed for an equaliser and then, four minutes and forty seconds into added time, the 2,000 plus Burnley fans behind Hill’s goal went wild. It was another great corner from Jakub that this time was met by the soaring Steve DAVIS. He was big enough to sort things out to head home the equaliser. Play re-started but for just under a minute when Kirkby finally decided enough was enough. He left the field to a torrent of abuse from the home fans but his biggest mistake was not calming things down earlier than he did. He let it get out of hand.

This had been another real battle for a point but a point we got and although the lead at the top of the league was reduced later in the day to three points we were still very much in an outstanding position. The only bad news was that one of the yellow cards had gone to John Pender and, being his sixth of the season, he would now be suspended for two games. Mullen wasn’t happy with that. “It was John’s first challenge of the game and while it may have deserved a free kick there was never a booking in it,” fumed the Burnley boss. “A decision like that has cost me my captain and important central defender for two games, but at the same time one of their players has committed five fouls before John made his tackle.”

The manager was delighted, however, with the comeback. “As soon as we pulled one goal back, I knew that we would equalise sooner or later,” he enthused. “Mike Conroy did very well to hold his concentration while two players were treated before he could take his penalty. It would have been easy for him to make a hash of it after that two minute wait. He took his penalty very well and I was pleased for him. I was disappointed that we put ourselves in a position where we had a mountain to climb. To come back from 2-0 down showed a great deal of character, ‘keeper or no ‘keeper.”

It was Blackpool who had moved within three points of us. They beat Rochdale 3-0 at Bloomfield Road, only Rochdale’s fourth defeat of the season. Andy Gouck, Paul Groves and David Eyres got the Blackpool goals.