A league win on cup day for the Clarets

Having lost to Liverpool in FA Cup 3rd round replay, Burnley rearranged the previously postponed league game against Huddersfield Town who had also gone out of the cup in a home replay against Carlisle United.

After what seemed to have been an age of time with speculation upon speculation there was finally some confirmed news of the route the new Calder Valley highway would take through Burnley and also with it came news that it would have motorway status. It was announced that the road would be called the M65 and immediately the news was made public came news that the Gannow Residents’ Association were to co-ordinate their opposition to the scheme. 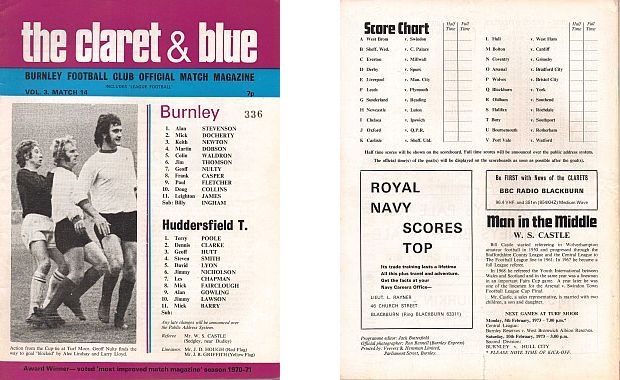 They did agree that there was need for such improved communications for the area but believed the route should skirt the town and not come straight through the Gannow, Whittlefield and Padiham Road areas. On behalf of the association, Mr Ronald Bushby, a former Mayor, said: “If we get to know of other bodies who are opposed to the scheme we hope to co-ordinate this opposition. Objections have to be made by April 30th. We feel we should force a public inquiry by making a formal objection. Just how far we shall be able to go will depend to some extent on the financial situation and on whether we can join with other objectors in presenting our case.”

We might have been set for a motorway going right through the town but there was some good news with the results of a survey which pronounced Burnley a much healthier place to live than it had been a decade earlier. It was a national survey of air pollution and it pinpointed the progress made in Burnley. The survey had only taken data to the end of 1970 but there had been even bigger improvements since with Burnley saturated with smoke control orders, one of the first towns to have this.

The air might have been better but the Corn Flakes certainly weren’t as one eight year old boy John Turner found out. The packet might have read: “Kellogg’s Corn Flakes. Sunshine and Vitamins,” but young John took a mouthful and found a piece of metal three quarters of an inch long. Some of us might have thrown the piece of metal away; others might have made a complaint to Kellogg’s that could have resulted in a few free packets, but John’s dad went further. He just so happened to be one of the town’s public health inspectors so he firstly had the metal analysed which showed it contained 72.4% copper and 27.6% zinc. Armed with that information he then took the company to court. The magistrates fined Kellogg’s £40.

Two local pub landlords were in the news for entirely different reasons. We start with Tom Stuttard, the licensee of the Rose & Crown in Manchester Road. Tom had taken over at the pub during the Second World War and the brewery honoured him to celebrate thirty years behind the bar. It was his second house after previously having been at Burnley’s roughest pub, the Dog and Duck which had since been demolished. The brewery, Bass Charrington, hardly pushed the boat out. All he got was a magnum of champagne.

Even so, it  was better news for Tom than it was for the landlord of the Old Red Lion at the other end of Manchester Road. It was after closing time. Some residents were having a last drink but one pub customer was refused because it was after time. It was 58-year-old Harold Astin and eventually he was asked to leave. When he refused he had to be ejected. Next news, the landlord heard the crash of glass as one of the windows went through. Astin admitted it when taken to the police station and said: “He was rough with me when he chucked me out. I’m not bothered; I’ve a good mind to go and do it again.” In court, Mr H. G. W. Cooper (defending) said his client had arrived at the police station with bleeding from the mouth and with his dentures broken. The court weren’t impressed. They fined him £10 and ordered him to pay the cost of the damage at £85.

Another man, when caught stealing 130lbs of lead from the roof of the Plan Tree Hotel in Westgate, told police that he was drunk and didn’t realise he was doing anything wrong. The courts were told that drink had become a real problem. He admitted stealing lead to the value of £5.20 and was sent to prison for 18 months.

Local housewives were giving a warning by the Burnley and District Grocers’ Association following the closure of a local shop. A spokesman said: “We forecast that this sort of thing will continue. These shops do not close down because they are profitable, but because they are not given the necessary support. It is only when they have closed that the housewife realises the benefits that have been available. The small shops are competitive when thought of in terms of time wasted and money spent in travelling to large shops. The public has been brainwashed on the advantages of supermarkets and I would like to appeal to housewives to support their corner shop whenever possible otherwise she may find that suddenly there is no local shop.”

With the Thompson Centre just over  a year away we reported recently that the Central Baths, situated behind the Town Hall would close. It was a decision that, according to teacher Colin Mason, could see an increase in child drownings. He said: “A lot of first year junior schoolchildren are not going to swimming lessons at all because of pressure on space. We feel the Central Baths must stay open at least until the whole position has stabilised. The obvious argument behind this is the danger to lives. There’s 20 miles of waterway in Burnley, and young children come across these places all the time. If children have a hobby like swimming, it helps to prevent vandalism and for both these reasons it is essential that all children should be able to swim.”

On the topic of vandalism, there were more problems reported for Burnley supporters, this time those who travelled by coach a week earlier to the QPR game at Loftus Road. £200 worth of damage was done to a Central Motors coach carrying fans with four near side windows smashed by stones thrown at the vehicle. Manager of the coach firm, Mr A. Pollard, said: “Some of the people we are carrying tend to attract trouble. The Burnley fans definitely have to share the blame for some of the incidents we have. “We’d like some ideas to improve security and try and prevent things like this happening. Right now we wonder if we are going to run coaches again.”

One week on and we weren’t expected to have a game. It was FA Cup 4th round day and we were out of the competition with no league fixtures scheduled. But, in December, the home game against Huddersfield Town was postponed when they were hit by illness and with both clubs out of the cup they decided to fill the blank Saturday with this rearranged game.

Huddersfield had been relegated from the First Division at the end of the previous season but were finding it difficult to live up to their title of promotion favourites. A run of three points from the previous seven games prior to arriving at Burnley had seen them drop to third from bottom in the table. However, manager Jimmy Adamson warned: “This is an important match for us. We must start winning again as soon as possible, but Huddersfield won’t make it easy for us.”

Our opponents had endured a busy week. They signed Phil Summerill  from Birmingham for £40,000, their best player came off the transfer list and off the field their chairman resigned. Interestingly, the player coming off the list was Jimmy Nicholson and he said the reason was to help out the club in their present plight. Chairman Frank Drabble had found himself threatened by a supporters action committee and he quickly got out.

The big question was how we would react after the defeat at QPR and in the first half the answer was not very well at all. It was a miserable 45 minutes of football when Burnley played worse than at any time all season. The performance suggested ours was a team of no-hopers but there was a transformation after the break when once more, it looked like a team on top of the league.

Such was the first half performance that it looked as though a poor Huddersfield team would be let off the hook and they might go home with a draw or even worse could go on and win the game. The passing often went astray; there was no confidence in the performance and the only good news at half time was that we were still in the game at 0-0.

It all changed after the break. Paul Fletcher made two good runs in the opening minutes that lifted the crowd and seemingly lifted the performance on the pitch. Burnley were transformed and looked a different outfit from the sluggish show of the first half. Fletcher set up Frank Casper, but the striker saw his shot smothered by goalkeeper Gary Pierce and within the next few minutes all of Doug Collins, Martin Dobson and Fletcher had sent shots just wide. Finally we thought we’d gone in front when Leighton James turned in a pass from Fletcher but, very controversially, the goal was ruled out for offside, a decision that baffled just about everyone.

The goal was coming and in the next attack we went in front. Nicholson handled to stop James cutting in on goal. Dead ball expert Collins took the kick and found the head of Geoff NULTY who made no mistake. It owed everything to the accuracy of Collins. There were 24 minutes remaining but soon after Fletcher, who was by now in outstanding form, was forced off with a groin injury and replaced by Billy Ingham. He did really well and capped his cameo with the second goal three minutes from time. Dobson started the move on the right touchline and played the ball to James who linked up well with Ingham. James forced his way through and after rounding one man he was half checked with the move looking to have broken down, but he quickly retrieved the ball and his delicate chip was met by INGHAM at the near post and he flicked the ball into the net.

It looked all over at 2-0 but in the very last minute we conceded a penalty when Colin Waldron brought down Summerill with Alan GOWLING converting the spot kick. A 2-1 win it was and the two points took our lead at the top of the table back to three points over QPR.

Adamson said: “By our own high standards we made a lot of mistakes in the early part of the game, and I considered at the finish that we had done pretty well to win, taking all the circumstances into the reckoning.”

Only one other game was played with mid-table Middlesbrough beating Blackpool 2-0 at Ayresome Park on the Friday night courtesy of two David Mills goals.

The Clarets were scheduled for another home game a week later, this time with Hull the visitors. They were in ninth place in the table but with just two wins on the road at Luton and Huddersfield.