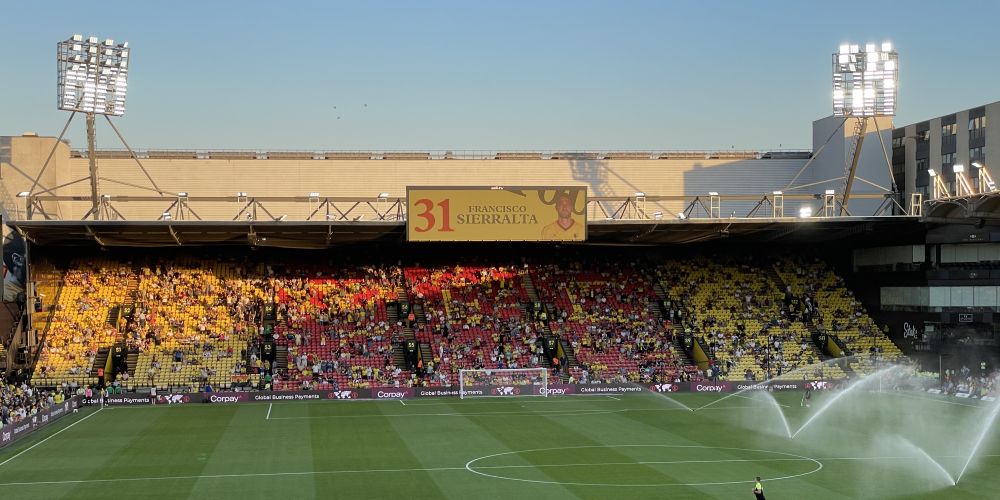 Having won one and drawn one, Burnley suffered a first defeat of the season at Watford on Friday night where we went down 1-0 with the only goal coming right on half time from Tom Cleverley.

It was our second away game of the season and, like the first at Huddersfield, was moved to Friday for Sky television coverage and we all know the perils of trying to travel on our roads on a Friday. The Huddersfield journey is a short one but this trip to Hertfordshire caused angst for many supporters who struggled through road works, lane closures and accidents which, hopefully ended with us all getting there on time.

Travelling by coach, there were a couple of hold ups in the North West and some slow moving traffic on the M6 but there was no major indication of what was to come when we pulled into the services on the toll road to pick up an extra passenger.

That quick stop gave me the chance to have a chat with a former Claret too. As we were travelling south, Alex MacDonald was with the Gillingham squad on their way to Merseyside for a League Two game against Tranmere on the following day. He’s just recovered from a long term injury and working his way back to full fitness. Alex, like us, didn’t have the best of weekends football wise.

Embed from Getty Images
The Burnley police first alerted us to the problems ahead and then we were getting horror stories from fans trapped for some time on the M1 and hardly moving. Our navigation team, better known as the drivers, quickly made plans and opted to come off the motorway just north of Milton Keynes and used the A roads for much of the rest of the journey.

I’ve only once set off for a game and not made it. I was reminded of it just the day before. Yes, it was Watford back in 2009 when Clarke Carlisle had a ‘mare and we were beaten 3-0. Thankfully, thanks to our alert drivers and the Burnley Police, we were there around 7:30 p.m. and I got into the ground quickly, going past the long queue of Burnley fans who hadn’t received their tickets.

I think we were close to leaving the motorway when the team news came through. We are still getting used to Vincent Kompany and still debating how close he might be to a ‘same again’ Sean Dyche or to ‘Tinker Man’ Claudio Ranieri in his Chelsea days. He had kept the same team for the Luton game having won at Huddersfield but his one change for this game wasn’t a surprise given it was Manuel Benson coming in. What was a surprise was Jack Cork being the player to make way.

It all started well and for the first ten minutes or so it looked like another Huddersfield as we dominated possession and left Watford, at times, chasing shadows. Unfortunately, that didn’t last too long. Watford’s main tactic seemed to be to stop Benson, which they did with a couple of unnecessary challenges, but it worked and they soon got to grips with things.

Embed from Getty Images
There’s been much said of Watford’s approach, particularly seemingly targeting Benson, and there has been much criticism of referee Tom Bramall who was clearly following the new directions regarding fouls and yellow cards. Having seen the second foul on Benson, I do think Hassane Kamara was somewhat fortunate not to get a yellow card but, in fairness, so were both Charlie Taylor and Josh Cullen in the opening ten minutes of the game.

Our good start almost came to a very abrupt end when we came close to being victims of our own downfall by trying to play the ball out. Ismaila Sarr, who appears to only be able to score now from his own half of the pitch, got to the ball but Cullen did well to win it back.

For much of the rest of the first half, we offered very little and the one consolation was that neither were Watford although they were just about the better team. Even so, I was relieved to get to 45 minutes with the score 0-0 and felt that we could regroup at half time and go on and win it.

Then, in stoppage time, disaster struck with Watford taking the lead but this was a goal that should  but this was a goal that should have been cut out, but when the ball was played back having come in from the right, Josh Brownhill was unaware of Tom Cleverley and let him run onto the ball to slide it into the corner of the net, so similar to the way Brownhill finished at the same end last season.

Embed from Getty Images
There was no doubt that we needed to change something and we did by introducing Cork, who we had missed so badly, at the start of the second half with Dara Costelloe, who’d hardly been involved on the left, making way.

The substitution definitely made a difference in a second half that we just about dominated from start to finish. Brownhill, now playing in a more advanced role, was very much involved and at times it looked as though it was a contest between him and Watford goalkeeper Daniel Bachmann who, according to the Burnley fans, was a not very good version of Ben Foster.

He saved from Brownhill who had got in on the left of the box, although Brownhill’s first touch had let him down, and he made another very good save when the Burnley midfielder, who wore the captain’s armband in the first half, hit an Ian Maatsen cross at goal.

Jay Rodriguez came on, as did latest signing Nathan Tella, as we pushed for an equaliser but Watford dropped deeper and defended well, but we might well have been close with around ten minutes remaining had fourth substitute Vitinho not been pulled back by Kamara.

Embed from Getty Images
This time the referee did go for his card; it was red and Watford would have to defend their lead for the rest of the game with ten men. Bachmann again saved from Brownhill, this time from the resulting free kick, although it didn’t look as though it was going in, and then finally he did get the better of the Watford keeper only for the ball to come back off the bar.

Time was running out. Central defender Luke McNally was thrown on up front and he got in a shot that Bachmann saved but when Connor Roberts played a loose ball across the pitch, it was all over. The final whistle blew and Watford had won the game 1-0.

There are obviously issues. When Kompany arrived at Burnley, he did so with a promise of possession based football. We’ve certainly got that; once again in this game, we had 64% of the possession.

He promised we’d have all the qualities of old but with goals to add to it. Defensively, everything looks fine. We’ve only had two on target shots against us in three games, both of them have gone in. Arijanet Muric hasn’t made a save yet worthy of the name and that’s not a criticism, he had no chance with either of the goals we’ve conceded.

Embed from Getty Images
We’ve had a total of thirteen shots on target with four of those coming in this game. That’s where the problem is; we simply aren’t scoring the goals. Two weeks ago we should have been out of sight by half time at Huddersfield but led 1-0 while last week, having equalised, we should have beaten Luton. There is no way, either, over the ninety minutes of this game that we should have been beaten.

However, goals win football matches and we are just not scoring anywhere near enough goals and that is not necessarily down to one or two players. Under Sean Dyche, with the way we played, we were reliant on our front players scoring the goals. In all his years in charge, only Scott Arfield (21) and George Boyd (12) reached double figures, other than the five forwards Sam Vokes, Chris Wood, Ashley Barnes, Danny Ings and Andre Gray. The football is different now, Kompany himself has said the goals should be shared. But first we need to be scoring goals and that’s probably the only problem we have right now, although, admittedly, that is some problem.

One final, and personal observation on the game. For the first time, we made five substitutions. I don’t like it. I had reached the point where I’m not certain I knew who was still on the pitch and who’d gone off.

A disappointment overall then at Watford and now for the journey home. Taking advice to avoid the M1, we returned via the M25 and M40 and I was dropped off around 3 a.m. Travelling by road in this country is a nightmare that becomes even worse on a Friday; travelling by train seemingly worse. I’m sure we’ll be making an early start for West Brom.