A new signing and a big defeat for the under-21s

The team news for this afternoon’s Professional Development League game against Hull City was delayed with reports of a new signing coming in.

That new signing was Albanian youth international Renaldo Torraj (pictured) who was with Spurs last season in their youth set up where he played as a right-back. He played in Premier League 2 for Derby earlier this season but has been at Burnley for a month and has played as a trialist. 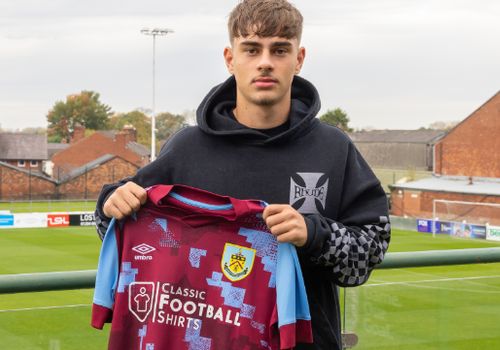 In announcing the signing, the club reported that he could be making his debut as a confirmed Burnley player this afternoon. That made sense with the delayed team announcement but by then we were already at Leyland and there was no sign of his name on the team sheet.

The concern in the line up was the defence with two recent recruits from Cork and Barking, a youth team player and Owen Dodgson playing in an unaccustomed position in the centre of defence.

It was a defence that was beaten six times with Hull’s goals coming from six different players, but the first chance of the game fell our way that saw Oliver Green block Michael Mellon’s effort.

Then the floodgates opened. James Scott headed home from a corner and then a pass across the back was picked up by Jim Simms and it was 2-0. Harry Wood got the third from the penalty spot and with just over half an hour gone it was 4-0 when Harvey Vale scored.

In the closing minutes of the half, Alex Healy-Byrne crashed into an advertising hoarding. Although the game was held up for a while, with Frankie Deane replacing him, the referee opted not to add on any time.

It took Hull just six minutes of the second half to make it five with a goal very similar to the second we’d conceded, this time Oliver Green finding the net and the final goal came with eighteen minutes remaining with substitute Billy Chadwick adding his name to the scoresheet.

All in all, this was a disappointing performance for the under-21s who are next action on Tuesday of next week against Peterborough at the London Stadium.