A night to remember against Liverpool 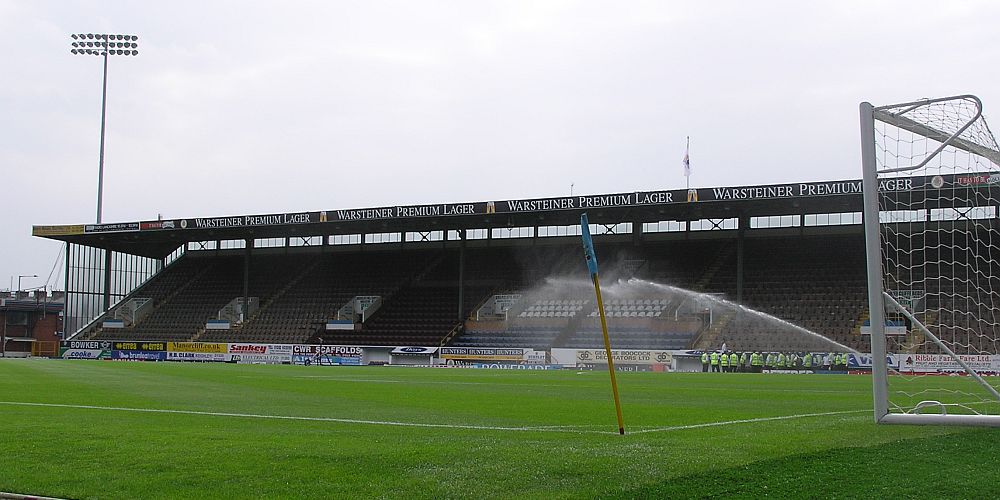 We were due to be playing at Anfield this afternoon against Liverpool in the Premier League but with the game postponed we can go back just over fifteen years to an FA Cup tie against them played at Turf Moor.

Below is my report from that night as the Clarets went through to a fourth round tie against Bournemouth much to the displeasure of the Dorset club who had been hoping for a big money day at Anfield.

Bert Freeman, Ray Harrison, Peter Noble and Derek Scott had all been scorers in 1-0 cup wins against Liverpool and in January 2005 we were able to add the name of Djimi Traore to that list after his bizarre own goal ensured the best team on the night went through in the 4th round of the FA Cup.

The previously postponed game had been in doubt again but when referee Mark Clattenburg ordered the covers off an hour early at five o’clock everything was fine. It took a police decision to further delay the tie when they decided to move kick off back fifteen minutes due to travelling Liverpool fans running late.

As expected Liverpool boss Rafael Benitez made a number of changes, eight in fact, from the side that had lost to Manchester United. It’s alright when you can. For Steve Cotterill it was a matter of naming just about the only side he could do with three of Saturday’s midfield all missing, Graham Branch and Michael Duff with injury and James O’Connor because West Brom did not want him cup tied. It was particularly tough for Branchy who had been looking forward so much to playing against the side he has always supported.

Embed from Getty Images
Despite Benitez bringing in some of his younger players it was still surely going to be a tough night for Burnley but you certainly wouldn’t have thought so the way we started the game. Within the first five minutes the visitors, defending the Cricket Field End, could have been behind and were thankful to Jerzy Dudek who saved firstly from Richard Chaplow and then, following the resulting corner, kept out a well struck shot from Micah Hyde.

It wasn’t just a matter of the Championship side having five or ten minutes either because the Clarets continued to dominate the game. It was hard to believe the change following the stale 0-0 draw against Reading on the previous Saturday but here we had the midfield getting forward at every opportunity to support Ian Moore and a Burnley side looking to have one intent – to go out and win it.

I’d seen some hammerings over the years against Liverpool and it was brilliant to watch them struggling to contain us. If only we could get a goal. Skipper Frank Sinclair went close, Hyde got forward again to test Dudek and the midfield players were getting into good positions with Moore working his socks off pulling defenders here there and everywhere.

It wasn’t all Burnley though and Liverpool actually won a corner, their only corner on the night and soon afterwards had a really good chance following an awful error from Lee Roche. It says much about this side that Roche, having given the ball away, chased back at Florent Sinama Pongolle and did just enough to allow Brian Jensen out to save. That was just about it from the Premiership big boys in the first half and the only real disappointment was that we weren’t in front when referee Clattenburg blew for half time.

Could we go on and do it? We made no changes at half time and after a couple of half hearted Liverpool attacks the wonderful moment came. We worked the ball down the left, Chappy picked it up and skipped past Zak Whitbread before crossing low into the box. Quite what Traore was trying to do we will never know but he succeeded in putting the ball into his own net, and it went far enough over the line for the referee to give it. It was a crazy way to go in front but who cared, Turf Moor was on its feet on three sides and you sensed it was going to be our night.

Embed from Getty Images
Within no time it was almost two but Hyde blazed over and then Dudek saved well from Chappy although he probably should have done better with the shot. If only that had gone in, it would have virtually assured our place in the next round.

Benitez suddenly realised that his side were heading out of the FA Cup and belatedly did something about it, introducing Milan Baros who replaced the evening’s goalscorer. There is no doubt that Liverpool upped it a bit from then on. Baros did cause us a few problems but he found out as many others had that this Burnley defence was a mean one. The visitors were getting frustrated and with five minutes to go they made it even more difficult for themselves as they went down to ten men.

Antonio Nunez looked to have had a little kick at Tony Grant but then he certainly raised his arm and struck him in the face with play further up the field. The referee never hesitated and out came the red card.

There was to be one last scare after we gave away a free kick right on the edge of our own box but the wall stood firm, in particular Gary Cahill stood firm, and the effort was blocked. We were even able to get the ball down our left and play keep ball as we counted down the three minutes of added time before the impressive Clattenburg blew that final whistle and booked us our place in round four.

To pick out individual players is almost unfair but I will and I thought the return of Hyde was vital. He was magnificent in the midfield, he won the ball countless times and offered great support to Moore up front. He was also very  unfortunate not to get a goal himself. But they all played well from Brian Jensen in goal to Jean-Louis Valois out on the left and make no mistake, there was only one team ever deserving of winning this cup tie.

Embed from Getty Images
Liverpool had never won an FA Cup tie at Burnley, they still hadn’t. They didn’t like it either and they all walked home alone sulking, none more so than the less than gracious Benitez.

“We don’t have the squad to compete in four competitions at the top level,” Benitez cried after seeing his side lose at the first hurdle. “You cannot play all those games with the same players, it is impossible,” he added. “If I’d used more senior players, perhaps we might have had problems in the next game or in the Champions League. We played against Tottenham Hotspur in the Carling Cup with young players and won, so we tried to do the same here. I don’t think it was a mistake. The fans will understand that we tried and worked hard, I cannot ask for more from them.

“It was a bad mistake for the goal. He had a man coming at him and tried to control it when he should have just cleared the danger. It was a mistake.” He concluded: “We have a lot of injuries and we have to give people time to recover and to be ready for the Premier League, the Champions League and next week in the Carling Cup semi-final.”

For Steve Cotterill, he said it was his greatest night in football as a manager and was full of praise for his players. “It feels really good and I’m delighted for the boys, I though they were excellent tonight. I think we were the better team in the first half, but then they were perhaps better in the second half. We had to dig deep because we didn’t get the goals we needed and we managed to hang in there.

“The pitch was hard physically for both teams and it was important we dug in. It’s just a great night for us and it is important that we say and do the right things and we’ll be humble about it. The last time we had a good cup win, I remember we went and got bashed at QPR a few days later. We have to do the right things and make sure we don’t do the same at Cardiff.”

Looking forward to the next round against his old club Bournemouth Cotterill added, “It will be a hard game for us but I probably know as much about their team as I do about my own players. I know they will be well organised and will be well prepared for the match and will have a few tricks up their sleeve. We will have to be ready.”