A point on our first trip to Underhill

The Clarets made a midweek trip to Underhill in 1992 and came home with a point from a 0-0 draw against Barnet that brought us level with Blackpool at the top of the Fourth Division.

Plans were going ahead for the Burnley Summer Celebration which was to be held during a week at the end of June promoting shopping in the town. It was expected that the pedestrianisation scheme would be complete by then and to celebrate the week, the council were expected to approve a week of free parking in the shopping car parks from 11 a.m. each day. 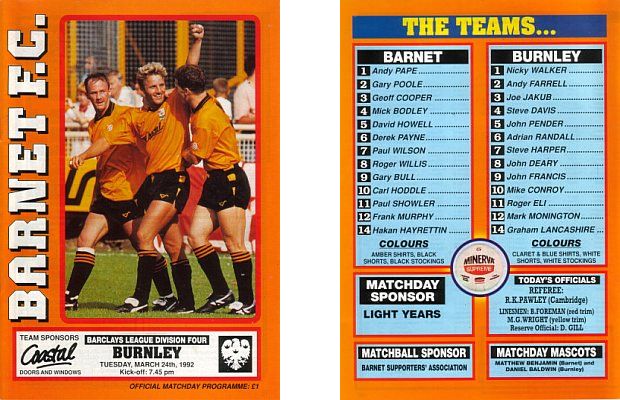 A TV licence holder got more than he bargained for when he went out delivering summonses. He was returning to his car on Accrington Road when a man grabbed him by the throat while another man grabbed hold of his arms. Worse was to come, a third man punched him in the mouth, breaking two of his teeth. He was able to give a description of one of the attackers to the police.

There was good news for local sportsmen and women with the opening of a new multi-purpose all-weather pitch at Barden High School. It was officially opened by the Mayor of Burnley, Mrs Irene Cooney, who was full of praise for the new amenity. She said: “This project was created with the support of the school, Barden Community Association, Burnley Borough and Lancashire County Councils and the North West Regional Sports Council and will be used by many sportsmen and women in the future. It is a superb facility and I urge local people to take advantage and support the scheme.”

Burnley man Dale Semmens was up in front of the magistrates on a drink driving charge and they were told that the man was living in cloud cuckoo land because of his alcohol abuse as he appeared for a third time on similar charges. A police officer had spoken to him while in his car and his breath smelt strongly of alcohol while he also looked unsteady on his feet when he got out of the car. I don’t think he helped himself when he got violent, leading to him being handcuffed. He’d been disqualified in the previous year for three years but his defence, Mr Richard Taylor said that although it was his third drink driving offence, he had no previous convictions for driving while disqualified. Taylor said he’d had difficulty in adapting to civilian life after leaving the army. Whatever the excuses, he was given a further three year driving ban and placed on probation for a year.

A Burnley family sold their £9,000 caravan to a man who paid by Building Society cheque. It turned out that the cheque wasn’t bona fide and he’d given a false address. It was not the first such incident locally and the police warned that these conmen usually struck in the evenings when the building societies were closed. The family were the losers with the caravan gone and not a penny received for it.

There was to be a big boost for pub drinkers with Bass Taverns set to spend over £1 million in improvements to some of their Burnley pubs. Those earmarked were Sidewalk, The Old Duke, The Lane Ends, Park View and the Black Bull.

Jimmy Mullen had been spotted in the town centre with a collection tin but it wasn’t that the club had failed to find the money to pay his wages. He was swapping autographs for donations to ‘Nationwide Football Against Multiple Sclerosis’. There was also to be a charity match between former players of Burnley and Blackburn to be played at the less than neutral venue of Darwen. It was all part of a national campaign organised by brothers Danny, Rod and Ray Wallace.

Mullen said: “I think it is a credit to football that those in the game can forget about the pressures of the sport for a while to help others. Multiple Sclerosis is a terrible disease and we are pleased to be in a position to do our bit to boost the funds to fight it. The people of Burnley have shown incredible support for the football club through the turnstiles this season. I hope that they will be able to find a bit more money to help us give the national campaign a big boost.”

On the subject of Burnley supporters, some of them had landed themselves in a tasty end of game incident at Mansfield. The way I remember this was that our fans were subjected to a difficult situation caused by angry Mansfield fans who had been infiltrated with some Nottingham Forest supporters. However, Mansfield Police Inspector David Stott confirmed that most of the offenders were indeed from Burnley.

Confirming that most of the seventeen to be arrested were from Burnley, Stott said: “Unfortunately Mansfield didn’t do the best job they could have in sorting out the fans, but as usual at any match there was a small minority of fans intent on causing trouble. However, there was a big police presence and the situation was controlled by the officers.”

Three days later, on the Tuesday night, it was another away game at Barnet when the Underhill ground was the main cause of any issues.

Before departing for North London, Mullen reported: “We know that the Barnet game will be a difficult one for us. They lost at Halifax on Saturday and will want to bounce back as soon as they can. Barnet look like their promotion challenge might be starting to come adrift, but that could make them even more dangerous.”

There was disappointing news with the manager confirming that Nicky Walker had returned to Hearts with Chris Pearce getting a recall at Barnet and Mullen promising he would do all he could to bring in another goalkeeper before the end of the week.

We kicked off at Barnet on the back of three successive wins during which we hadn’t conceded a goal. We didn’t concede in this one either but had to settle for a point from a 0-0 draw against our fifth place opponents.

Burnley were the better of the two teams without doubt but it was a night when both defences were on top and our back four of Andy Farrell, Steve Davis, John Pender and Joe Jakub were outstanding when any criticism to be aimed at the team would have been the lack of creativity in midfield.

Did we come to terms with the horrendous conditions? The Burnley fans struggled off the pitch, being forced into an area that was, if being kind, totally inadequate for the numbers who travelled. Somehow, I managed to find myself pushed to the front; it was far from comfortable but at least I could see the pitch even if the view was shocking.

On the other side of the wall, we played on a pitch in awful condition, a pitch must smaller than any we were used to and on a slope that made things very difficult. We played uphill in the first half and all credit to us for snuffing out the home team who were scoring the bulk of their goals playing downhill. They had two big chances in the first half. Both fell to Gary Bull; he hit the first one over the bar and then saw Pearce save well.

Virtually all the second half opportunities fell our way but Barnet defended well and we just couldn’t get that goal that would have taken us back to the top of the league.

The draw took us level with Blackpool but it was the Seasiders who still led the league. We couldn’t be separated on goal difference but Blackpool had scored two more goals than us. We still had a game in hand and there was good news from Mansfield who were held to a 0-0 draw by Lincoln at home, leaving us two points ahead of them with two games in hand.