A second draw for the Clarets in Northern Ireland

Having drawn at Crusaders and won at Linfield, it was another draw for the Clarets at Glenavon in game number three on the pre-season tour in 1997.

There were concerns in the Burnley camp that we might not have a goalkeeper for the game. Chris Woods was definitely ruled out with the Achilles injury that saw him substituted in the win at Linfield, while Marlon Beresford was nursing a sore toe. 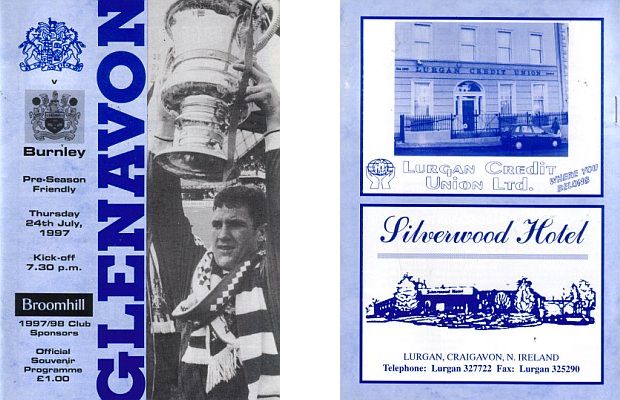 Manager Chris Waddle explained: “It’s a bit of a worry for us and to be honest it will probably be ten days to a fortnight before Chris is right. He’s not 21 any more and these injuries take longer to shake off for him now. We’ve rested Marlon since Tuesday and hopefully he’ll be okay to play tonight. The toe injury is very sore but he said it feels better today. We will leave it until the last minute.”

Waddle again made changes and gave Gerry Harrison his first piece of action. Harrison had been back in England as he became a dad but was with the squad for this game.

Beresford did play and he was picking the ball out of the net in just the fourth minute when Glenavon, the Irish Cup holders, went in front. Jamie Hoyland played a loose ball which was picked up by former Preston and Leeds forward Tony Grant. He raced forward to the edge of the box before squaring the ball for Glenn FERGUSON to hit home with a superb shot into the corner.

We didn’t often look under threat of conceding again but it was a disjointed performance from the Clarets overall and we had just one big chance to draw level in the first half when we put together a superb move only for Paul Barnes to put his shot over the bar when he looked certain to score. Waddle had started it with a pass to send Paul Weller down the win. Andy Cooke stepped over Weller’s cross but Barnes couldn’t keep the shot down.

There was some excitement early in the second half when the PA announced that Kevin Keegan was coming on as a substitute for the home side. He duly did but this was not the former England player but an 18-year-old Glenavon midfield player who went on to play in the Irish League for a number of years, eventually moving from Glenavon to play for both Coleraine and Glentoran.

Cooke was soon afterwards substituted on the orders of the referee. He was involved in a situation with home keeper Dermot O’Neill. It was an awful challenge and In a league game, Cooke, who was already suspended for the opening game at Watford, would have been sent off. He was fortunate that the referee asked only for him to be removed from the pitch.

Determined not to be beaten, Burnley finally did get an equaliser late in the game. Michael Williams played an excellent ball to Eyres who in turn found BARNES and he made no mistake from ten yards to score his fourth goal of the tour.

Eyres, who got the assist, revealed some good news on the night too with Waddle having appointed him as the new club captain. A delighted Eyres said: “This has come out of the blue for me and I’ve got to say I’m extremely proud and honoured. It was such a special honour when the gaffer pulled me to one side earlier this week and said I want you to captain Burnley for the rest of the season.”

He added: “There is a tremendous feeling of optimism about the place all of a sudden and the whole first team squad are up for the challenge in a big way. The manager’s arrival has filled everybody with fresh belief and I just can’t wait for the season to start. To get the captain’s armband from somebody like Chris Waddle makes you feel that you’ve got the respect of the man. It works both ways because I really respect him.”

Regarding the game, Waddle, who received a superb reception from the home supporters ahead of the game, said: “We played some nice football at times, but we were a little undisciplined. That was probably the major point that annoyed me. There were a few tired legs out there and one or two people got a little bit frustrated when things didn’t click. We gave away too many silly free kicks and a better team would have punished us more.

“However, some of our set play was quite good and I’m quite positive about things. We are only a week into our pre-season fixtures and we are still giving people games and tuning our fitness levels up. Players like David Eyres and Paul Barnes have played every match and that’s quite a demanding schedule in just six days.

“Overall, it was a reasonable performance and if we had taken our chances then we could have come away with a comfortable win. I’m not at all negative about the situation. There were a lot of pluses to come out of the game and the tour so far. I’ve seen some nice things and, in other displays I’ve seen the weak points. It has given me plenty to think about and work on.”

There was just one more game to be played on the tour and that was the one against probably the team we best associate with in Northern Ireland. We were due to play at the Oval against Glentoran two days later.