In March 1973 Burnley followed up the brilliant Tuesday night 4-0 win against Portsmouth with a 2-1 win against Millwall on the following Saturday that edged the Clarets ever closer to promotion.

At the beginning of the week there had been a half day strike held by workers at the two Vokes factories. The company had been accused of callously manipulating the lives of their employees as speculation continued to grow on potential redundancies and without a word from management. The strike had the desired effect in getting information but when that information came it was not good news. Workers were told that about fifty employees would lose their jobs and a list of names  would be published during the following week. 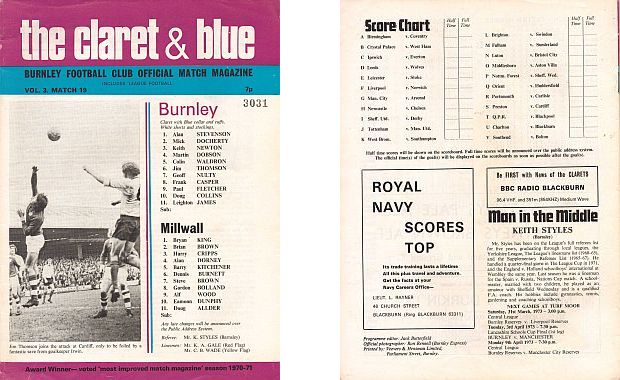 The statement was issued by top Vokes executive Mr J. Watson and, after meetings with shop stewards and union officials, management announced that the factory’s machine shop at Lodge Mill would close down. In addition, other work would be phased out. They confirmed that there would be further rationalisation but it would be April before any announcement could be made.

Works convener, Mr Arthur Thornton, admitted: “The announcement hasn’t really come as a surprise. Now we know where we stand, and that is why we took action to find out. Already about 120 to 130 employees from all sections have left the company, but after our meeting with management we don’t think there will be any problems over redundancy settlements. Our chief regret is that our members’ fears were allowed to grow for far too long.”

On the subject of the closure of Central Baths, Mr William Gaskell came in to partially back up the argument put by Alderman Thomas Gallagher that more use could be made of the swimming pool at Padiham. Mr Gaskell was the superintendant at Padiham and he said that when the councils were reorganised in 1974 it could mean more free periods would become available. “One way out would be to have a meeting with representatives of Burnley Town Council and the officers, myself at Padiham, and Mr Mattocks, Director of Parks and Recreation, from Burnley,” Mr Gaskell said. “We will have more vacancies in 1974 than we have now, because some schools will go into Clitheroe and some into Nelson, although I can’t really say how much free time we’d then have, or what we could do to help Burnley schools.” However, he made it clear that Padiham children came first and his main priority would be for them to start swimming lessons at an earlier age.

“Operation Sandstorm” was well underway and was proving to be controversial. This was the sandblasting scheme to brighten up many of Burnley’s older public buildings but the cost of the scheme had already exceeded a quarter of a million pounds with ratepayers required to find around £60,000 of it. Alderman Gallagher, never without a word, said: “I am not sure what the public feels about this. Some reactions I have heard have been very favourable, but some have said that we could be spending the money in far better ways. My opinion is that we are doing a very worthwhile job in helping to brighten up the town.”

Councillor Frank Booth agreed. “I too have heard remarks both in favour and against,” he said. “But we are improving the town and that surely must be right.” He did remind councillors that some improvement schemes have been hit by vandals. “Already three of the trees we have planted have been broken. I really wish members of the public would help by reporting incidents of this kind so that more of the vandals can be caught.” However, Councillor Ernest Bacon led protests about the way the clean up was being carried out. The council had been critical of others having such work done in an untidy manner but, relating to some of the council work, that at Stoneyholme School, Bacon said: “I had a complaint last Thursday of a motorist going down Brougham Street and not being able to see where he was going.” And Councillor Michael Noble added: “It is quite ridiculous to put smoke control orders through and then to see this dust.” And this after one contractor was issued with a statutory nuisance notice by the town’s Health Committee.

Another argument kicked off, this time in the letters’ page in the Burnley Express. Mrs Dickmann of Leaver Street in Rosegrove was an angry woman over the proposed motorway and took exception to comments she attributed to Councillor J. Keller. She wrote: “Councillor Keller’s statement that he wouldn’t want to continue working for a town that had only old buildings and derelict buildings in it just about sums up the whole rotten situation.” Councillor Keller denied ever having said it and in his reply said: “I challenge this lady to substantiate her claim immediately or retract it. At no time would I dream, or have I ever dreamed, of making such a statement in relation to elderly people.”

There was some very good news for the Scott Park Veterans whose hut within the park had been burned down. They’d been invited to use the Parkside Sunday School as their temporary headquarters and were offering invites to anyone wishing to join their activities. The council had offered to help find a new site for them and secretary Mr Albert Hayes confirmed that there had been only one firm offer of financial help, a gift of £100 to buy new furnishings. He did say it was his duty to thank Rev John Hainsworth who had allowed used of the Sunday School but this would only be possible until April.

Councillor Edward Brooks was presiding at Burnley Magistrates Court and threatened to clear the court because of too much noise from the public benches during a drugs case. Three youths were in court on charges of unlawful possession of drugs. “These are serious matters and are not a source of entertainment,” Brooks told the court. “We want this court treated with the proper respect and dignity it is entitled to, otherwise it will be cleared.” The three, aged 21, 19 and 17, were all remanded on bail for three weeks for social reports. The eldest of them, a former boarding school boy, admitted charges of possessing cannabis resin and cocaine. The other two admitted the single charge of possession of cannabis resin. Both drugs, said Brooks, were dangerous. The court was also told that all three appeared unsteady when questioned by police who believed they may be under the influence of drugs. The case was adjourned and just about without the need for the court to be cleared.

Ahead of Burnley’s game against Millwall, there was some cricket news with Lowerhouse confirming that their professional for 1973 would be Tasmanian Tony Benneworth. The link came when Burnley resident and Worcestershire wicket keeper Rodney Cass, who had acted as a substitute professional for Lowerhouse, met with Benneworth in Tasmania while he was captaining his club side North Hobart.

For the game against Millwall, Jimmy Adamson was able to name a full strength team after both Keith Newton and Doug Collins came through despite suffering recurrences of their injuries in the win against Portsmouth. It was never going to be another big 4-0 win but the 2-1 victory moved the Clarets to within five points of the First Division as they completed a week in which three wins had been secured. Those wins had taken us a massive 11 points clear of the third placed club and that meant five more points from the remaining seven games (two wins and a draw) would be enough to ensure Burnley would once again be playing First Division football.

It wasn’t all smooth sailing. We went behind against Millwall after making a poor start to the game, but then came back to lead at half time. We dominated the second half when, but for some woeful finishing, we’d have had another big win, but a win it was.

Millwall had made a disappointing start to the season but had recovered and were one of the strongest teams in the league. But for that start they might have been near the top themselves. They showed in the first half just how good they were and we were unable to break the stranglehold they held in midfield. They should have gone in front when Gordon Bolland, one of the league’s leading goalscorers, broke through but he needlessly handled the ball and the chance was gone. But in their very next attack BOLLAND did get his name on the scoresheet when he took a pass from Alf Wood, beat Colin Waldron and hit a firm low shot wide of Alan Stevenson.

Things weren’t looking too good for Burnley but the game changed in the last three minutes of the first half when we scored two classic headed goals and so nearly got another. Mick Docherty made a good run down the right and sent a perfect chipped ball over their defence for Martin DOBSON, running in, to head firmly past Bryan King. We won the ball back straight from the kick off, got the ball down the pitch and won a corner. Doug Collins took the kick which was met by Jim Thomson who headed against the post.

We were inches from the lead but it came within a minute. Leighton James and Collins engineered a move on the right, Collins crossed, Dobson and Harry Cripps in the centre both missed the ball and Geoff NULTY stooped at the far post to give King no chance with his header.

The second half was mostly a tale of missed chances and things should have got easier when Millwall were reduced to ten men following the sending off of Eamonn Dunphy. He appeared to be receiving a booking but was then suddenly shown the tunnel. Referee Keith Styles confirmed: “I sent Dunphy off for a remark he made while he was being cautioned.”

Strangely, Frank Casper, who had turned in a brilliant performance in the Pompey win, was the main culprit in front of goal and that led to the crowd turning on the striker with the jeers heard on all three sides of the ground. As Peter Higgs wrote in the Burnley Express: “It was surely ridiculous for sections of the crowd to jeer him for not scoring. They were, no doubt, disappointed, but so too was Casper and such crowd behaviour does nothing to help him.”

Higgs though described promotion as now being almost a formality with just the race for the title to be fought against QPR. Burnley’s next two games were both on the road, at Nottingham Forest and Huddersfield. It was just possible that, by the time we next played at home we could have already been promoted.

QPR were big winners, beating Blackpool 4-0 to remain three points behind us with one game in hand. Blackpool had started the day in third place and remained so with none of Sheffield Wednesday, Fulham, Aston Villa  and Middlesbrough, the four teams directly below them, able to win.

It really did leave us and QPR in a very healthy position while down at the bottom it was yet another win for Brighton who were finally putting up a fight to stay in the division. They were now four points behind Cardiff and only one point further behind Huddersfield.