Monday, 16th April 1973 is a special date in the history of Burnley Football Club who became a First Division club again just two years after suffering relegation at the end of the 1970/71 season.

There will be no other local news from that time reported on this occasion, it will be all about the big news, the only news in town as Burnley celebrated in style leaving, I’m sure, some extremely sore heads and missing workers on the Tuesday. 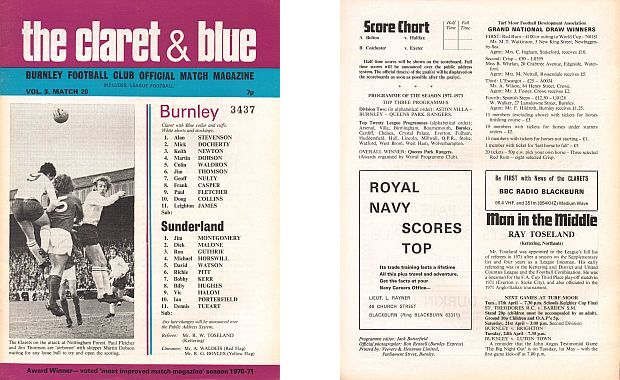 The game was being played nine days late because of Sunderland’s involvement in the FA Cup, but it was worth waiting for. A Monday night for much of the season would have been a difficult one for me. I had university lectures until 5 on a Monday but this was the Easter break and so I had just the short walk to get there, via the Park View which was always, back then, our port of call before a game. It proved to be our port of call for hours and hours after the game too. I was nervous, as I’m sure many others were, but one of our group, Brian Lucas, arrived at the pub so ultra confident that he had brought with him a bottle of champagne and some glasses in readiness for the celebrations.

Almost 23,000 of us went through the turnstiles with Burnley forced into one change from the team that had started the game against Huddersfield two days earlier. Mick Docherty, stretchered off in that game, was out. It was confirmed that he’d suffered a cartilage injury and would be ruled out for the rest of the season. Eddie Cliff had deputised a few weeks earlier when Doc was suspended but this time Jimmy Adamson turned to his tried and trusted substitute Billy Ingham who had come on and done so well at Leeds Road. Youngster Ray Hankin took Billy’s place on the bench for the big night.

We started so well and might have had an early goal to settle the nerves, my nerves at least. Leighton James went on a superb fifty yard run in only the second minute before losing control and Frank Casper was inches away from getting onto an Ian Porterfield back pass that just about reached goalkeeper Jim Montgomery.

The FA Cup finalists were second best but hung on until the 27th minute at which point Turf Moor simply erupted. Martin Dobson and Ingham built up a move down the right hand side before getting the ball across to FLETCHER on the edge of the box. He turned sharply and lobbed Montgomery to give the Clarets the lead. It was a much deserved lead, so much better that Sunderland were we. Little had been seen of them until the closing minutes of the first half when, out of the blue, they forced Alan Stevenson into two saves, a reminder that this game was most definitely not won.

We’d played well but the second half didn’t live up to the first as Sunderland started to get more physical leading to four of their defenders being booked. It really had got scrappy, but we kept the lead as time went on and then, in the 89th minute, we knew we were on the way up as we doubled the lead. Again it was FLETCHER with a fierce shot that Montgomery couldn’t hold.

Soon after that goal, the final whistle blew to start celebrations the likes of which I’d never witnessed before as a Burnley fan. Brian’s bottle of champagne, which had spent the entire ninety minutes in his bag, was opened on the Longside and we stood there having a celebratory drink. The team came back out for a lap of honour and I even saw my dad punching the air in jubilation, thinking to myself that a man of his years, he was 51 at the time, should be politely applauding and not getting too carried away.

It was the first time I’d seen Burnley win anything. I’d become a Claret in 1960 just after the championship win and this was, and remains to this day, so special to me. It was back to the Park View. All the press came in, local and national. The Cricketers pub in Anne Street had gone and this is where they were now hanging out. One of them was Dennis Lowe, a fat bloke who used to do a bit on Grandstand at the time.

He’d never favoured Burnley and was now stood at the bar in my local, alongside my friends and, so everyone could hear, dismissing our chances in the First Division. When I heard him it proved too much and, aided and abetted by Burnley Evening Star reporter Keith McNee, I have to say, I gave him more than a piece of my mind. He wondered what had hit him but his insistence that Burnley would be relegated again within a year had to be challenged. He left soon after and the party went on. Licensing laws? I don’t know about that but the Park View certainly didn’t shut at 11 that night. I think we were still there close to 11 on Tuesday morning.

The party, at times, spilled outside and onto Brunshaw Road. No one was bothered. I even saw Bob Lord smile as he came out of the ground, I kid you not. Even Jimmy Adamson came to talk to us, a rarity in itself, as did captain Martin Dobson and defender Colin Waldron.

Someone came into the pub some hours later to let us know that the Burnley Express newspapers had arrived at Frank Mason’s shop just three doors up from the ground. Out we went, taking the papers and leaving the money for Frank. I recall seeing one fan having climbed onto the ticket office roof, pint in hand of course.

Usually, when I got home from the Turf, my mum, who had no interest in football, would ask: “How have they gone on?” This time, getting home around 14 hours after the final whistle, she didn’t need to. We’d won 2-0, we’d won promotion, we were heading back to the First Division, on this most special of Turf Moor nights. I’d three days to recover. It was Easter on the following weekend and we were at Oxford on Good Friday. We still had so much to play for in the remaining four games.

The teams that night were;

We’ll have some of the reaction to the promotion, from Bob Lord, Jimmy Adamson and Martin Dobson later this week ahead of our triple Easter programme with Burnley back in the top flight with four games still to play. Now we needed to go for that title.