A win at last on Sean Dyche’s Day 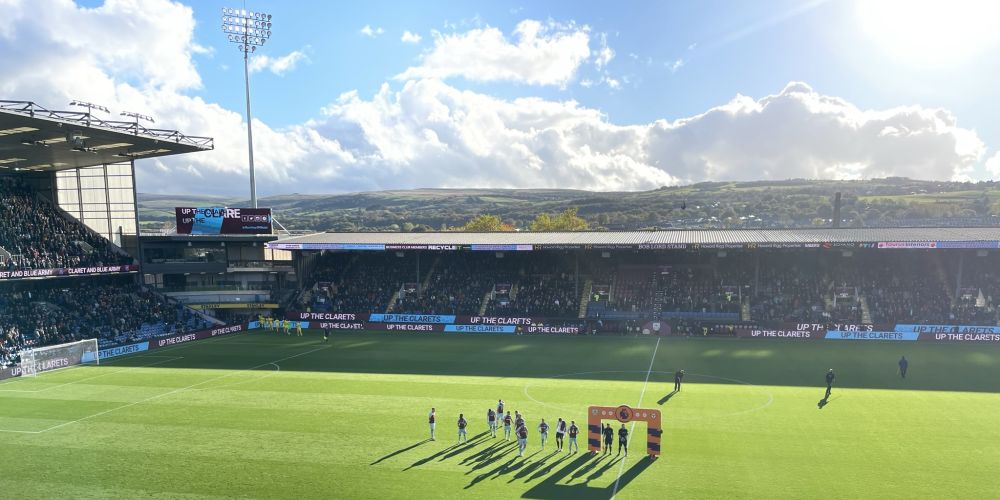 Sean Dyche reached nine years in charge at Burnley yesterday and was rewarded with a first league win of the season with the Clarets beating Premier League newcomers Brentford 3-1 at home.

Besides bringing us that first Premier League victory of the 2021/22 season, it was also our first home league win since we beat Aston Villa 3-2 last January and our first win in front of a crowd since the 3-0 victory against Bournemouth way back in February 2020.

Thankfully, I was there in time. Problems coming in from Manchester meant a less than reliable X43 service and the clock was fast approaching 2 o’clock when the bus due almost an hour earlier arrived. I could have chosen to walk down but I didn’t realise at the time just how long the delay would be.

The team news was confirmed at 2 p.m. with Dyche making two changes from the team that had drawn with Southampton last week. As expected, Ben Mee returned but that must have been a difficult decision given how well Nathan Collins has played. The other change saw Jóhann Berg Guðmundsson come in for Jack Cork which again meant Maxel Cornet playing in an advanced role alongside Chris Wood.

Embed from Getty Images
A minute’s silence was observed ahead of the game in what is our final home game before Remembrance Day. It was impeccably observed with Chris Gibson and Matt Hargreaves playing The Last Post.

With us attacking the cricket field end in the first half it opened with a scrappy two or three minutes before bursting into life when Dwight McNeil played a cross field pass for Matt Lowton. The right-back, who was to make a telling contribution to the performance, hit a super ball forward for Chris Wood. Brentford’s Ethan Pinnock got a touch to it but did nothing to stop Wood who took his shot with a first touch from the edge of the box on the right hand side that sailed flew past Brentford’s debutant goalkeeper Álvaro Fernández and into the far corner.

It was just the start we needed and 1-0 was so close to becoming 2-0. This time the ball forward was from Ashley Westwood. It could be said that Wood headed it on for Cornet and he did although it was more Wood not getting a good head onto the ball. Cornet did the rest with an excellent finish but VAR wasn’t happy and the goal was ruled out with Wood marginally offside.

We were playing well and the crowd was up but we had a couple of scares when Ivan Toney saw a shot well saved by Nick Pope and then find himself flagged offside as James Tarkowski cleared off the line.

Embed from Getty Images
Guðmundsson was next to have a chance. He ran on to a Westwood through pass but the goalkeeper came out to deny him. That could have been two but we didn’t have long to wait.

Lowton was having a stormer on the right hand side but I don’t think any of us could have expected him to do what he did next. He went on a surging run forward and played the ball for McNeil and went for the return. It didn’t come but we didn’t lose the ball. McNeil played it to Westwood who linked with Cornet before the ball was played back for Charlie Taylor. Lowton had found himself in their box and was on the end of Taylor’s cross to head home.

It was all Burnley now and two very quickly became three with a goal from the crowd favourite Cornet that lifted the whole ground. McNeil found Cornet on the left. He brought the ball down so well with his left foot, went inside a defender and from 18-yards found the top corner of the net with his right foot.

Iain Dowie, on Sky, suggested he’d scored it with his weaker foot, but then we saw the goal at Leicester also with his right. Cornet ran towards the Bob Lord where he was mobbed by substitutes Ashley Barnes, Aaron Lennon and Phil Bardsley along with most of the players on the pitch.

Embed from Getty Images
With referee Jon Moss looking at his watch for half time we were close to a fourth. Wood and Cornet linked up superbly and almost set up Guðmundsson. Eventually the ball found Wood who was at just too tight an angle.

It was what we’ve been waiting for all season. We’d turned in an outstanding first half performance and were fully deserving of the three goal lead we took into the break.

On the last occasion we had played Brentford we came in at half time with a 3-0 lead. That was back in the Championship in January 2016 when we’d turned in a superb half of football. That game ended 3-1 and so did this one although when the Brentford goal came it was out of the blue.

For virtually the whole of the second half we looked comfortable. We were definitely not as progressive and, to their credit, Brentford looked a side who weren’t ready to concede another three goals.

Embed from Getty Images
We still had our moments. Wood came close and Lowton fired in a long range strike that he kept down but shot wide of the left hand post. And then, from nowhere, a ball is lofted into our box on their left hand side. It’s headed back into the middle for substitute Saman Ghoddos to hit home with an outstanding strike.

What is it about football fans? We were all sat there comfortable in the knowledge that the game was won and suddenly, with eleven minutes remaining, we started to get nervous. With the fear of Brentford scoring another, there were now concerns that we might have, at best, a difficult end to the game.

We needn’t have worried. Brentford’s goal out of the blue proved to be just that and we ran out comfortable winners.

At last, we’ve got that win. We have played some good football in so many games this season without getting the reward the performances had deserved. As Stan Ternent would tell us: “One swallow doesn’t make a summer” and it definitely doesn’t. We are still in the bottom three with Leeds having won at Norwich this afternoon but there is absolutely no doubt that a win will have given everyone a lift.

Embed from Getty Images
We did it on Dyche’s ninth anniversary as Burnley manager too. I have to pinch myself sometimes at how we’ve progressed and what we’ve achieved in those nine years since he took over a bottom half of the Championship team.

We will need a lot more wins this season to ensure we are not where we are now in the table but this first win has given us the confidence to believe that’s exactly what we can do.

« It really came together today
Under-23s take on Birmingham tonight »