With Frank Hill having moved to Preston, Burnley kicked off the 1954/55 season without a manager and with the directors selecting the team until a decision was made regarding the appointment of Hill’s replacement. That was the situation for the first four games of the season but when we kicked off against Everton at home in game five it was a welcome return for Alan Brown as Hill’s successor.

Brown had started his playing career with Huddersfield but signed for Burnley ahead of the first post-war season and was appointed captain by manager Cliff Britton, leading us to promotion and an FA Cup final in his first season. He left us for Notts County in 1949 in what was a big £12,500 deal for a player who had already reached the age of 34. He wasn’t there long before retiring and had been working as a coach at Sheffield Wednesday before getting the call from Burnley for what was his first managerial role. 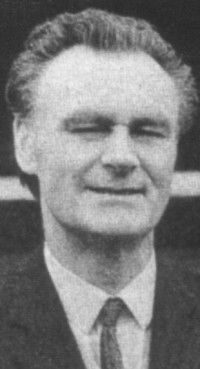 Brown had been a hard man and a disciplinarian in his playing days and his management style was hardly different. He quickly dispensed with two of his former team mates. Reg Attwell made his final appearance in Brown’s first game in charge, although he hadn’t been a first team regular for some time, and Harold Rudman followed after the next game after a long career at Burnley.

Just as he had marshalled the ‘Iron Curtain’ defence in the early post war seasons as captain, Brown set about creating a similar way of playing as a manager. In three seasons as Burnley manager the side conceded just over 150 league goals. In two of those seasons Burnley conceded fewer goals than any other club in the division and in the 1955/56 season only Champions Manchester United conceded less.

His first season ended with a mid-table finish but both the 1955/56 and 1956/57 seasons saw Burnley finish in seventh place. However, Brown was planning ahead and with new chairman Bob Lord was instrumental in setting up the Gawthorpe training ground which, of course, is still in use by the club today. He was a manager who, rather than bringing players in from other clubs, very much wanted to coach young players, and among those he brought to the club were young North Easterners John Angus and Jimmy Robson. In the 1955/56 season he gave a debut to a young local lad by the name of Brian Miller and in 1956/57 Angus and Robson got their first taste of first team football as did Adam Blacklaw and John Connelly. All of those five players would go on to be part of one of the club’s greatest successes.

Brown’s stay at Turf Moor though was just three years after which he made the decision to leave to become the manager of Sunderland. He had started a run that saw only former players manage the club for almost 29 years and his departure for a management job elsewhere wouldn’t happen again at Burnley until January 2010 when Owen Coyle moved to Bolton. Brown was with the Roker Park club for seven years before moving on again, returning to Hillsborough where his coaching career had started. This time he was the Sheffield Wednesday manager. There were to be four years there, a period which saw Wednesday play in the FA Cup Final in 1966 when they were beaten 3-2 by Everton having led 2-0.

In the summer of 1968 he returned to Sunderland for another four and a half years before he called time on football management in November 1972. He handed over to Bob Stokoe who just months later led out the Wearside club at Wembley in the FA Cup Final and a memorable 1-0 win against Leeds. Alan Brown moved to the south west and for a time was assistant manager at Plymouth. He remained in that part of the country until his death in March 1996 at the age of 81.

Prior to his death he wrote a book on his coaching methods. Many of the top managers of the time provided financial help to ensure the book was published, having held him in such esteem. Many of them spoke of his influence on their careers and none more so than then Nottingham Forest manager Brian Clough who throughout his own management career often said he wished he’d had Brown sat alongside him.

Clough recalled their first meeting when he was a young striker. Brown told him: “You may have heard people say that I’m a bastard. Well, they’re right.” Clough said of Brown: “Alan Brown taught me about discipline. I knew plenty about that from my mam, of course, but Browny’s discipline was applied to the team as a whole as well as to the individual. It was collective discipline. If you need an example, remember how my teams at Derby and Nottingham Forest went about their work: not by effing and blinding at match officials, not by intimidating referees or hacking the ball away in disgust at free kicks given against us. Referees regarded my teams as their favourites because we simplified their jobs. We made refereeing easier than it was with other teams. We didn’t antagonise them or chase them with angry words and gestures.”

Brown was, without doubt, a disciplinarian. It was his management technique that saw the early departure of centre-forward Peter McKay from Burnley despite his goalscoring record and there was always one story told by left-back Harold Mather about him. It was in the days before managers and players had cars and Mather was on his way to training one day and saw Brown walking in front of him. He caught up with his boss and they walked in together. After training, Mather was called into the office to be told: “Next time you see me walking down the street, stay a few paces behind. Don’t catch me up and walk alongside me, I don’t want people in this town thinking I have favourites.”

It was Brown’s style and that’s what he brought to Burnley for three years and it was three years that were more successful than any league table can ever suggest. There were new players introduced who would become members of Burnley’s title winners just a few years later and there was perhaps Brown’s greatest legacy – that of Gawthorpe.

« Our first Wembley Final
Favourites after win at Birmingham »