Steve Cotterill described him as the jewel in the crown and a player who would make his play better football when he signed Alan Mahon, initially on loan, from Wigan back in 2006, but things never quite worked out that way for the left sided midfielder at Turf Moor. 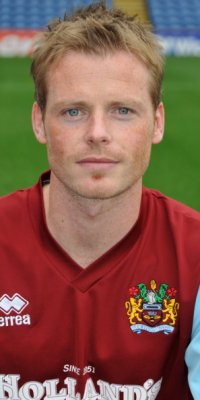 He ended the 2005/06 season on loan and then signed permanently on a three year deal. Always very much involved with the first team squad, be it when Cotterill was manager or Owen Coyle, he managed only 30 league starts for us and seven of those had come in that short loan period.

It was, sadly the story of his playing career where, apart from Tranmere, where he started his career, he never reached forty league starts for any club, and his return to his first club having left Burnley saw him make just eight starts having signed a three year contract which was eventually cancelled.

For the last five years he’s been working as a coach at Manchester City with the women’s team which was managed by Nick Cushing. who has recently moved to their sister club New York City where he has become assistant coach of the men’s team and Mahon has stepped up to take on the role of interim manager until the end of the season.

He should have enjoyed his first game in charge over the weekend but the weather put paid to that. His delayed debut will now be tonight when they face Bristol City at home and Mahon said: “I Spent five years working with Nick and I learned a lot from him, most importantly, consistency and simplicity.

“Everyone has applied themselves brilliantly through this period. The players have been very professional and have reacted really well. Yes, it’s going to be a change, some players have only ever been coached at senior level by Nick, but these things happen in football and you just have to keep focused and move on to the next stage.

“I’m looking forward to my first team talk. Hopefully the girls will understand me with my accent. But, in all seriousness, everything will be simple; exactly the way we’ve always done things.”

He might never have become the jewel in the crown but I did always think we played better football when he was in the team. It’s a while ago now though, his last appearance came in the FA Cup replay win against QPR just over eleven years ago, predictably as a substitute, coming on for the injured Chris McCann.