Almost there after Carlisle draw

Only goal difference was holding Burnley back from confirming promotion after a 1-1 draw at Carlisle, and we still had another three games to claim the one point needed to make certain. 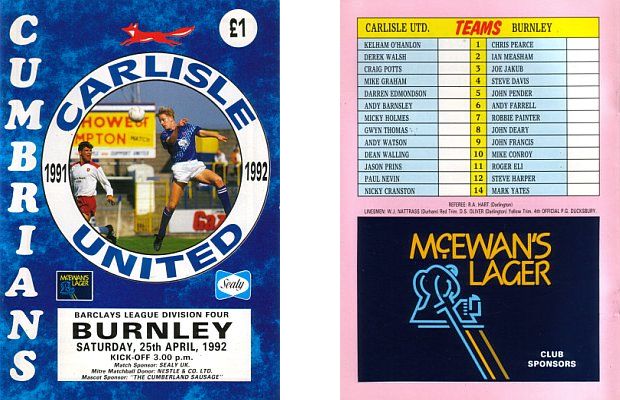 There was some good news to report from Burnley General Hospital with approval expected for a large extension. The plan, costed at £8 million two years earlier, had been rejected twice but the Regional Health Authority had always insisted it was only a delay because of budgets and so it proved.

It wasn’t all good news and one poor young woman, who had arrived to live in Burnley following an arranged marriage in Bangladesh, was found hanged. She’d hanged herself with her own sari.

And now a return to the good news with Mr Stanley Heaton, by then aged 84, with help from the Burnley Express, having found long lost relatives. The local paper published a letter from Mr Heaton, living in Yorkshire, and within no time he’d been contacted by two of those relatives. Surprise, surprise, Cilla not even in sight.

I find it unacceptable that people drink and drive but in this week, Allan Clark, aged just 18, pleaded guilty along with taking a vehicle without consent, driving while disqualified and having no insurance. The magistrates were told that he already had two previous convictions for all of those offences. Mrs Margaret Tomlinson, the bench chairman, remanded him on bail for the preparation of social reports but warned him that he’d put himself in a very serious position. Clark had nothing to say in mitigation with the court told he’d received a three year driving ban just a year earlier.

I was behind a wheel and on the road too on this day, heading north on the M6, destination Carlisle for what was surely another game in a season that was going to end in promotion. We were there early, but there were so many Burnley fans there, parking was difficult. We found somewhere eventually but I’m told people were actually parking on the motorway slip road to ensure getting into Brunton Park with the home club having to open the terrace at the open end, a terrace that was officially, at the time, closed down.

The Burnley fans arrived at Carlisle in party mood too. The Easter Bunny was there, so was the Easter Gorilla. They’d all waited too long for something like this already and they were all intent on enjoying it.

Manager Jimmy Mullen came out to see the fans and said: “I’ve just been out there today and seen all the painted faces, the kids, the children, the claret and blue crossed faces and chequered faces and striped faces. That’s superb, that’s the way football should be. That’s what it’s all about. For me, they’re the best supported club I’ve ever, ever been. I’ve been at four or five different clubs but Burnley Football Club is the greatest in terms of passion and feeling in what they do.”

It was very much a nervous performance and David Williams made a couple of good saves to keep us level. We just hadn’t got into our stride at all and Mullen appeared on the touchline gesticulating angrily, clearly far from happy with how things were going.

Then it all changed a couple of minutes before half time when John Francis got down the left and laid the ball off for John Deary. He combined with Steve Harper with the ball returning to Francis. This time, he turned past two defenders to get onto his right foot before finishing superbly. FRANCIS, what a cracker. He looked as though he’d gone too far out, no such thing.

It changed the game. We almost got another immediately after and things continued in the second half as Kelham O’Hanlon just about kept a Harper effort out after it had deflected off a defender.

It wasn’t to be the perfect day though. With only eleven minutes remaining, Carlisle got a ball in from the left and Deary failed to clear it. The ball dropped for Gwyn THOMAS who scored the equaliser to earn a point for Carlisle and to leave the Burnley fans checking results from elsewhere.

A clearly disappointed Deary said after the game: “We’ve just had a little discussion in the dressing room and we’re disappointed. Although we’re near promotion, we’re still disappointed with the result but we’ve got three games to get it right and we’ll be starting on Tuesday at York.”

Blackpool had won to remain one point behind us while Rotherham had no game. Mansfield were held to a draw by Maidstone meaning they could now only catch us on points and their goal difference was significantly worse than ours.

The champagne corks remained un-popped but to all extent and purposes, the season long target had been achieved. It was now surely just a matter of time before promotion was concerned and then there was still the title to go for.

We would soon know the result with our three remaining games scheduled for the next seven days – Tuesday at York, Thursday at Rochdale and then the final game at home against Wrexham on the Saturday.