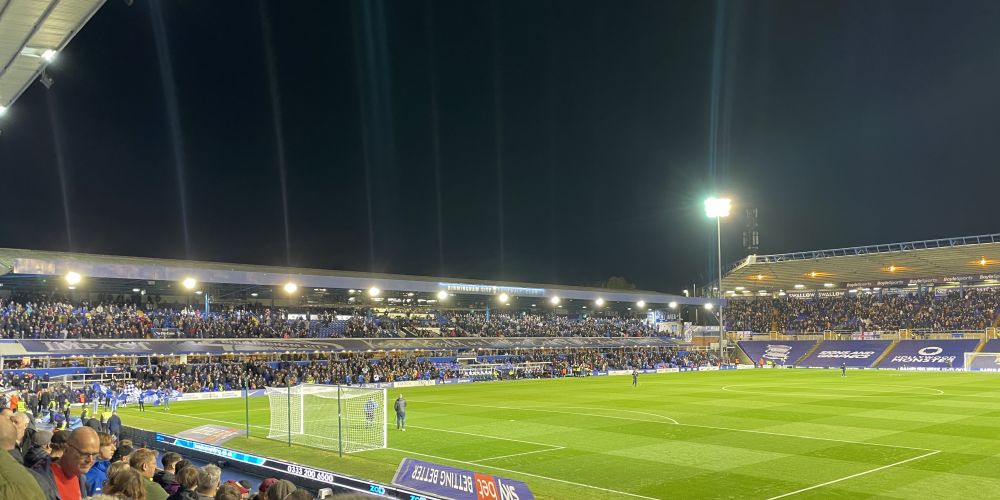 Burnley drew 1-1 last night against Birmingham City at St. Andrew’s, a result which has seen us drop into third place in the table after the midweek fixtures.

It is undoubtedly our most common scoreline this season. It’s our eighth draw in fifteen games and seven of those eight have now ended 1-1, the exception being the 3-3 home draw against Blackpool.

Yet again, for an eleventh consecutive league game, we went 1-0 up, but again we failed to hold the lead and on this occasion Birmingham were level within six minutes to leave us with an awkward quarter of an hour before we claimed the point.

It was a game and a point I wasn’t sure I was going to see, other on Sky’s red button, when traffic problems got in the way yet again. Our planned trip looked fine with a pick up at Prestwich where the X43 bus got me in good time. The big problem was our driver coming from Halifax and the journey taking over an hour longer than expected meaning we didn’t depart until around 5:35 p.m. I’m still astounded that we made it but we were at the turnstiles around a quarter of an hour before kick off.

Embed from Getty Images
We’d long heard the team news showing two changes from the team that had beaten Swansea with both Jordan Beyer and Ian Maatsen missing that saw returns for Connor Roberts and Charlie Taylor.

It was our first visit to St. Andrew’s since the 2-1 win in April 2016 that ended with an extremely animated Sean Dyche reminding us all of our strong jaw as promotion edged every closer. There were over 19,000 there that day but the attendance last night was around 3,000 less in a ground that is now looking a sorry state with the whole of the lower tiers at one end and on one side closed down due to structural issues.

As always, we were situated in the Gil Merrick Stand and we defended that end in a first half that was devoid of excitement with neither of the two teams offering too much in terms of goalscoring opportunities.

We did come close when Jay Rodriguez turned a Josh Brownhill onto the post. It was a terrific effort from Jay and an inch or two away from giving us a lead and potentially setting us up for another good performance. It wasn’t to be. Probably a Vitinho effort that went over was as close as we came again while in front of us there was rarely a threat of any kind from Birmingham and probably the only moment of concern came from a free kick that was headed way over the bar.

Embed from Getty Images
The only other moment of concern was Jack Cork getting a yellow card from referee Dean Whitestone just before half time. That’s taken Jack’s tally to four, just one away from a suspension should it come in any of our next four league games.

It was our second yellow card early in the second half that proved to be a major talking point. Anass Zaroury, who was, up to this point, having a quiet game, was played in but he went down in the penalty box. The referee immediately yellow carded him for diving. Dean Ashton on TV said that the referee had got it spot on but I’m not so sure. Having seen it again, I’d agree with the referee in not giving us a decision but not for one minute do I think it justified a card.

The second half was proving very similar to the first, lacking in quality and without any real chances at either end. With around twenty minutes remaining, Vincent Kompany turned to Jóhann Berg Guðmundsson and four minutes later he gave us the lead with our only on target effort all night.

It was the simplest of goals but a great finish. Emmanuel Longelo got to a ball we knocked forward but JBG latched onto it, went inside a defender and struck a curling shot right into the corner of the net. It was a superb finish and his first Burnley goal since the 3-0 win at Crystal Palace in February 2021.

Embed from Getty Images
The clock said 74 minutes. Surely we would go on and win this. Surely we wouldn’t concede another equaliser. Unfortunately, we did just that and what a bad goal it was to give away. We conceded possession from our own throw in deep in the Birmingham half on our left, they broke quickly and George Hall was able to cross low for Scott Hogan to turn it in at the near post.

There were still ten minutes left but there was only going to be one possible winner now and that wasn’t us. Birmingham did hit the post with one speculative effort that was covered in any case by Arijanet Muric but it was a tough watch until the referee finally blew time on yet another draw.

Birmingham boss John Eustace joined the growing band of managers who claimed we were the best team in the league, but they were more than worthy of the point with us turning in a very subdued performance.

It’s a strange league table right now. We’ve lost just once and no other team has lost less than three. But it’s the draw column that’s costing us. Only West Brom can equal our eight draws. Yes, we’ve now got an unbeaten run of twelve league games yet we still sit behind a team who have lost seven times already this season. We need to turn more draws into wins and if we continue to go 1-0 up then surely we should be able to do that. We will have to play much, much better than we did in this game to achieve that.

Embed from Getty Images
The return journey wasn’t too bad. There was a short hold up on the M6 and then we were forced off the M66 and had to go through Edenfield and Rawtenstall to get home, but that’s probably a relief given the problems we seem to continually encounter.

Now a couple of days off and back up to Sunderland for the first time since 2017 and a place where we are awaiting a first win since Paul Fletcher scored there in a 1-0 win in 1972.