Yesterday we had the news that Matt Gilks had become goalkeeping coach at Bolton but they’ve also signed a new player who once, briefly, played for the Clarets. 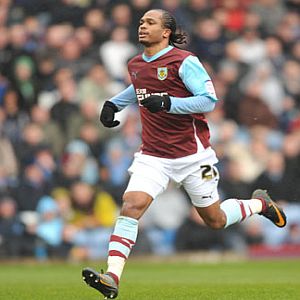 We have to go back to the 2010/11 season with Eddie Howe just getting his feet under the table as manager. Steve Thompson and Martin Paterson were both injured and then Charlie Austin, who had not long been at Burnley, suffered a recurrence of a shoulder injury in training that required surgery.

In came 20-year-old Nathan Delfouneso on loan from Aston Villa until the end of the season and he made a dramatic start scoring after just five minutes on his debut at Hull, the only goal of the game. It proved to be his only goal in a loan spell that wasn’t really productive before returning to Villa.

There were more loans to follow for him, to Leicester, then twice to Blackpool and finally Coventry before Blackpool signed him permanently in the summer of 2014. One year on and he moved to Blackburn for a year during which he went on loan to Bury. Then it was off to Swindon before a move back to Blackpool three years ago where he’s been ever since.

He’s now dropping into League Two with Bolton and he said on completing the move: “It’s great to be here and I’m looking forward to the challenge ahead. The things that have been said to me by the staff here and the faith they’ve put in me was a big factor in me coming here.

“Hearing the ambition the club has and what they want to achieve going forward is exciting. It’s almost like a reset button has been pressed and I can only see the club going in one direction.”

His new manager Ian Evatt, who has recently moved from Barrow, said: “We are absolutely delighted to welcome Nathan Delfouneso to the football club. Nathan has a great pedigree and is a top, top player at this level. He brings pace and quality to the side and we are excited to see what he and Eoin (Doyle, another recent signing) can do as a forward partnership.”