Another home win extends lead at the top

When the name Hereford is mentioned in Burnley, many point to the occasion in 1987 when they came to the Turf and beat us 6-0, but on this day in 1992 we beat them 2-0 at home and in doing so strengthened our position at the top of the Fourth Division.

There was concern for a nine-year-old boy who found himself trapped and then dragged under a bus for about a hundred yards. A police spokeswoman reported that it appeared to be a prank or dare that went wrong which left James Norwood with serious head injuries. He was quickly transferred to hospital in Preston where he was said to be in a stable but comfortable condition with his parents able to stay with him. 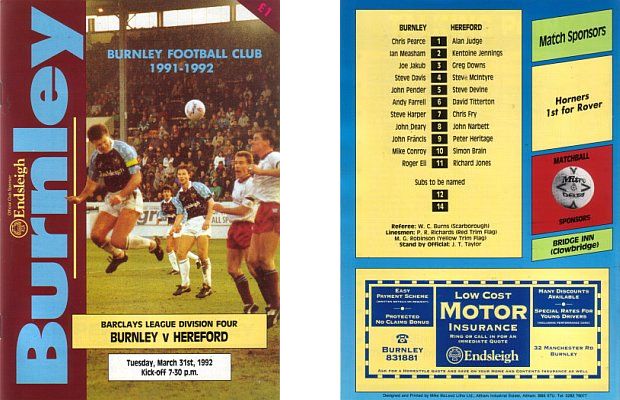 Sad news arrived from Australia of the death of a former Burnley pub landlord. Dennis Davey spent 24 years at the General Williams in Manchester Road where he had been popular with many of his regulars having banned music and fruit machines. He’d been retired for less than a year but, while on holiday in Australia, suffered a fatal heart attack.

A German Shepherd dog called Laddie became the first dog in Burnley to be destroyed under the new Dangerous Dogs Act. The order came after Laddie had bitten a man who himself was taking his dog for a walk; Laddie’s owner was given a conditional discharge.

It really was a week of bad news in town. Susan Dickens, wife of local GP Gordon Dickens was found dead in her car after police found a tube leading from the exhaust pipe into the car. A man in the Burnley Wood area was on prescribed Methadone but was in court of supplying a Class A controlled drug when he gave some to his common-law wife’s mother to help her with her depression. Unfortunately, she mixed it with a cocktail of tablets and was found dead the following day. He was sentenced to a year in prison.

A 15-year-old was caught red handed stealing from Coal Clough House. He’d forced open a door into an outside storeroom with a screwdriver and was on his way out with a full crate of lager. Police searched his house and found a stolen mountain bike and a stolen cassette recorder. He was made the subject of a 12-month supervision order.

Good news for residents in the area around Brunshaw Road, Brunshaw Avenue and Brownhill Avenue was quickly dashed after what was described as a council blunder. The residents had fought for some measures at the double junction which had become something of an accident spot. They finally received notification from the county council’s CEO Mr Gordon Johnson that safety measures had been agreed and a roundabout would be put in place. The problem was, Mr Johnson had got it wrong, the roundabout was going at the junction of Brunshaw Road and Brownside Road at Pike Hill. Mrs Marion Smith, who the organiser for the residents was disappointed. “We will keep pressing it until something is done,” she said.

A major row had broken out between two of Burnley’s General Election candidates when Gordon Birtwistle (Liberal Democrat) hit out at Brenda Binge (Conservative) for having election leaflets printed by a Walsall company. “If they are so keen on the local economy, why do they have to go out of town to have the leaflets printed? Surely there are enough printing companies in Burnley.” Birtwistle said. Mrs Binge confirmed that two of her three leaflets had been printed in Burnley but for this one, she replied: “The third was not given to a local company because there wasn’t a company in Burnley which could compete with the prices we were given by the printers in Walsall. We have to take the best offer we can get.”

Who was going to win the General Election was not on the minds of too many, it was more our chances of winning promotion from the Fourth Division, chances that had improved dramatically three days earlier when our main rivals won while we were beating Maidstone.

Two days before this midweek fixture against Hereford, the PFA confirmed the Fourth Division team of the year. All of Blackpool, Mansfield and Barnet had two played named but it was a well done to our central defender Steve Davis who made the line up along with players from Carlisle, Gillingham, Rotherham and Wrexham.

John Francis had been replaced by Roger Eli midway through the first half against Maidstone and now both were considered doubts with knee injuries. Ian Measham was still out while John Deary was suspended having been strangely sent off in the Autoglass Trophy win against Huddersfield.

“It’s going to be a very difficult game,” Mullen said. “I’m going to have to change things and I don’t like doing that when things are going well, but I know that whoever goes in will do a good job for me. It’s important that we carry on where we left off on Saturday, but that won’t be easy against Hereford. We know they can play because they beat us 3-0 at Edgar Street early in the season. We owe them for that and will be looking for a win to pay them back.”

The good news for Mullen was that Eli was fit to play; the even better news for him and Burnley was the game brought another three points from a 2-0 win against a Hereford team managed by John Sillett who five years earlier had managed Coventry’s FA Cup winning team.

Burnley played with a sweeper system and it took them a short while to get into their stride, but when they did, they hit Hereford with two goals in five minutes. Hereford had already had one player booked when they gave away a free kick on our right. Joe Jakub took it for John Pender to head on in the box for Mark MONINGTON to head home his first goal of the season. Hereford weren’t happy; they thought they’d cleared the ball off the line but the linesman had no doubts and indicated that it was a goal.

Burnley pushed forward. Hereford goalkeeper Alan Judge saved brilliantly to deny Davis and then we won three corners. When Hereford cleared their lines from the third of them, they soon paid. Andy Farrell won it and played a great ball upfield. Mike Conroy chased it before squaring the ball for Jakub. He tried a shot but it came off Eli, back to CONROY who curled a shot into the corner of the net.

Burnley were quiet for much of the remainder of the game but defensively sound, leaving Hereford with only one real effort at goal. With a much changed team, this was all about getting the result and we did just that.

We’d done our bit but Mansfield got back to winning ways when they beat Crewe 4-3 at home and remained five points behind us. Blackpool, who kicked off just three points behind, dropped points again having been held to a draw at Cardiff.