Another point on the road 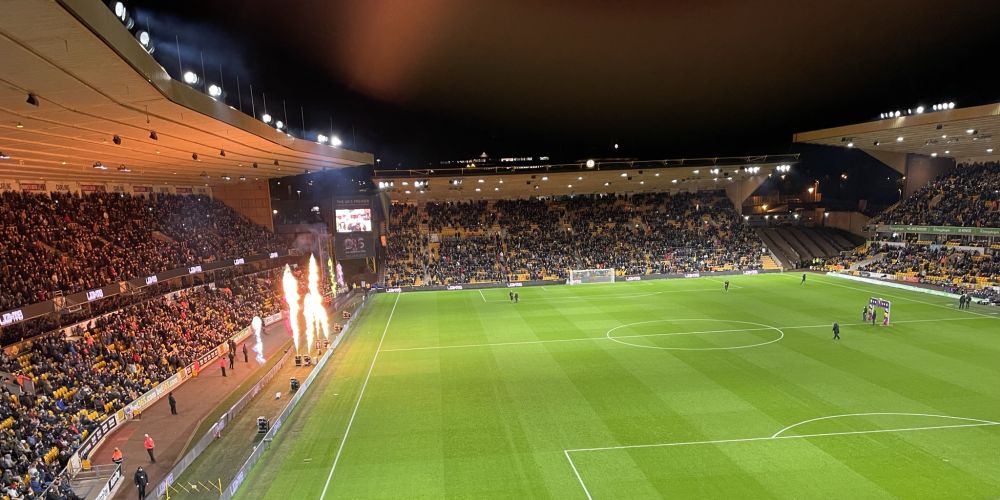 Burnley secured a point from a 0-0 draw last night against Wolves at Molineux, a fourth away draw of the season and a third in successive away games with the previous two coming at Southampton and Chelsea.

This was the first of the scheduled midweek games of the season, being covered by Amazon Prime, so no early start but I have to say it was good to be travelling again to a game. Having been forced to miss the games at Southampton and Chelsea, this was my first such fixture since the 2-0 defeat at Manchester City in October.

With our pub stop booked in Tipton, just over five miles from Molineux, we departed early afternoon and mercifully found the M6 reasonably quiet other than hold up caused by the rubber neckers after a heavy goods vehicle had jack knifed half off the north bound carriageway.

It gave us plenty of time to get to Molineux and we even found ourselves a much better parking spot than usual, not even having to pay the £1 parking fee thanks to a local lady who gave us her ticket.

Embed from Getty Images
Last time I was at Wolves, the day Ben Stokes turned an Ashes test on its head, you felt overdressed in t-shirt and shorts so hot was it. I can confirm it was nothing like that last night as the gloves and hat went on.

It ended 1-1 that day in the heat and last season we won 4-0 but we knew we weren’t at full strength last night. Nathan Collins and Jack Cork came in for the suspended James Tarkowski and Ashley Westwood as they would have done had the Spurs game gone ahead. There were two changes to Sunday’s bench however with Will Norris and Bobby Thomas stepping up to replace Phil Bardsley and Dale Stephens.

About ten minutes or so before the teams came out, the lights went out. Had we had some sort of power failure, perhaps? Oh no, we were about to be treated to a pre-match light show with a few flames thrown in. I thought I’d been transported to Disney World as the floodlights went on and off, the music blasted out, the flames got higher and higher.

Thankfully, proper lighting was restored for the teams just ahead of kick off with Burnley defending the Stan Cullis End of the ground as we did last season.

Embed from Getty Images
This was not a classic by any means. It lacked the goal excitement of the draws at Leicester and Southampton and certainly lacked the late equaliser that so upset Chelsea recently at Stamford Bridge.

This one saw us having to do a lot of defensive work but over the ninety minutes we didn’t concede too many chances to the home side, nor did we create too many ourselves.

After Wolves had most of the ball in the opening minutes, the first real shot at goal came from Charlie Taylor but we rarely troubled José Sá in a first half when Nick Pope had just one real save to make although it could have been more. Twice at least Adama Traoré got into good positions but he failed to find team mates while with the one big chance of the half he smashed a shot against the bar.

But credit to us as a defensive unit. We were superb in keeping Wolves chances down to a bare minimum and, with no disrespect to Matt Lowton and Ben Mee, there has to be special mention of Collins and Taylor. Collins did his job effectively and without any fuss. There was a time when we’d have had serious concerns with Tarkowski or Mee missing but he’s now slotted in alongside both of them this season and looked every bit the player we hoped we’d signed.

Embed from Getty Images
Then there was Taylor. Has he ever played better in a Burnley shirt? Throughout the game he defended brilliantly and got some great blocks and challenges in. Then, going forward, he offered us great support down the left hand side. There was one challenge on Raúl Jiménez that had every Burnley fan on their feet.

The half time whistle came and you couldn’t really complain at us not having scored. We did have one penalty shout but I don’t think we’d have been anything but extremely fortunate to have got it, not as though we do get penalties.

Could we step things up after the break? Initially it didn’t look so but then we did start to come into things but not until Chris Wood, hat trick star at Molineux just a few months ago, had a strop when he was taken off. He appeared to have words when passing Ian Woan and Sean Dyche but he very definitely had words once in the dug out that any lip reader would have understood.

Jay Rodriguez came on for him and I think that helped us to get a bigger grip on a game that Wolves were hardly dominating.

Embed from Getty Images
Collins was involved in an incident with Hwang Hee-chan that brought Stuart Attwell into play at Stockley Park as he looked for a potential red card. It certainly wasn’t and play continued.

Matěj Vydra came on and he and Jay Rod both had chances while Dwight McNeil got in a right footed shot that was saved. I thought if anyone was going to win it then it might be us but it wasn’t to be and we did have some defending to do in the four minutes added at the end.

Wolves dominated possession in those extra minutes but didn’t once threaten to score and the final whistle brought with it another point, much to the delight of the travelling Burnley fans.

No, anything but a classic but in conversation the day before I’d said that we would need to start getting clean sheets if we are to get out of the bottom three. Leicester and Southampton were more exciting than this, undoubtedly, but this I think, at this time, was a better result. We do need clean sheets and that was just our second all season in the Premier League.

Embed from Getty Images
A dilemma now for Dyche ahead of Newcastle. I’ve already commented on Collins but I have to add that I thought Cork was excellent, as was Jay Rod when he came on. Having said that, I doubt we’ll start at St. James’ Park without either Tarkowski or Westwood. Now that would be a good one to win.