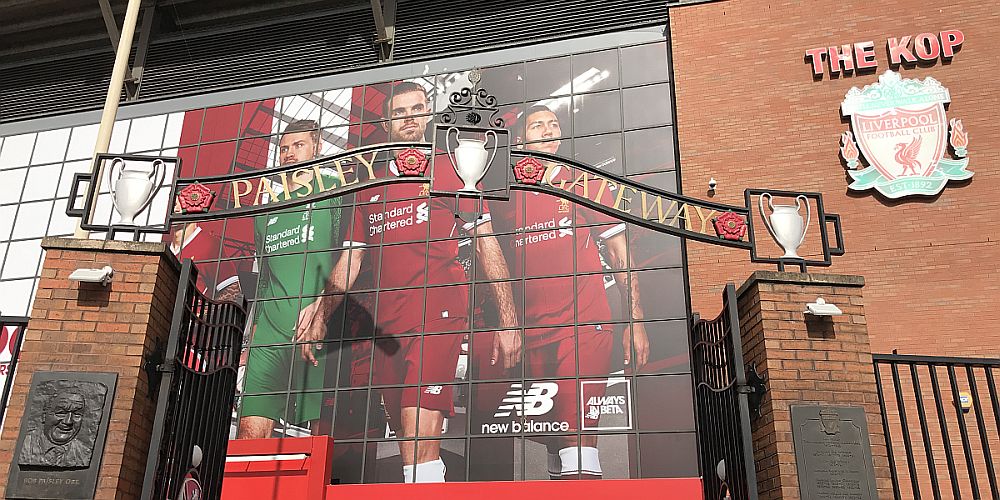 What a task awaited us yesterday at Liverpool. We were coming up against a team who had won every single home game this season, against a team who were crowned champions 16 days earlier when they still had seven games to play, yet we came home with a 1-1 draw on an afternoon when we could even have won the game at the end.

This is a Liverpool who have not dropped a solitary point at Anfield since January last year and, to show how difficult a task it was, haven’t lost a league game there since Crystal Palace came from behind to beat them 2-1 April 2017 with two goals from their former player Christian Benteke.

We always knew when we restarted last month that we still had the two most difficult games to play, this one and at Manchester City. City was our first game back. We were initially shocked at the line up and lack of players but probably not so much with the 0-5 scoreline. Liverpool are miles clear of City in the table, suggesting an even tougher game than we got at the Etihad, but I did say just ahead of kick off that I didn’t think they were a team who would brush us aside quite as easily as City do to us and so many others. Having said that, this Liverpool team have hit a five this season as well as four on four other occasions.

They were without the influential Jordan Henderson who won’t play again this season. Jürgen Klopp also opted to leave out Trent Alexander-Arnold. Was that rotation or just a concern given the way Dwight McNeil has played against him previously?

Sean Dyche had the luxury of being able to make a change to the Burnley team. Chris Wood, who had been used as a substitute in the previous two games, was deemed ready to start and came in for Matěj Vydra who dropped to the bench.

Embed from Getty Images
Games at Anfield are usually preceded with the home crowd singing You’ll Never Walk Alone while the Burnley fans, in the less than decent accommodation at the Anfield Road end, are replying with chants of Where’s Your Famous Atmosphere, but it was all quiet yesterday as I took my vantage point on the half way line in front of the television.

It’s probably an understatement to think that Liverpool had the best of the first half. At times they were very much the team who have swept all before them this season but great credit to our lads who stuck in there, worked so hard, defended brilliantly and did all they could to keep the chances to a minimum.

We have two outstanding central defenders in James Tarkowski and Ben Mee and there is always a concern when that partnership is broken up as it has been for the last three games with Ben’s injury. With Ben Gibson playing mard arse up on Teesside, Kevin Long, our longest serving player, has stepped in. He’s passed fifty league games for us now during this spell and I have to say, alongside Tarky, I thought he was terrific yesterday.

Our defence was breached a few times against this Liverpool side who throw so many men forward it is almost like watching Bill Shankly’s team again. When they did get through they found one almost unmovable barrier with goalkeeper Nick Pope. “It’s nice to help out now and again”, said Pope who made his full league debut for Burnley in this fixture two seasons ago.

The England goalkeeper, and please someone explain to me why he is not currently first choice for his country, made three simply outstanding saves during the first half. He was beaten just once by Andrew Robertson whose perfect header gave Liverpool the lead, a 1-0 lead they took into the break at half time although, in the latter stages of the half, we did start to ask some questions at the other end without ever really getting a goalscoring opportunity and Liverpool did end the half by forcing Pope into another outstanding save to deny Sadio Mané.

Embed from Getty Images
Half time is usually the time when we , as supporters, chat with our friends about the first half. Nothing has changed in that respect for me but I’m still trying to get my head around getting up to switch on the kettle once the players are leaving the pitch. Our Face Tim group was reasonably happy with how we’d played; I’d say as happy as you can be when you are a goal behind, but we suspected there was another onslaught to come in the second with Liverpool attacking the, albeit empty, Kop.

And so it was, they missed a decent chance while Roberto Firmino, who hasn’t scored a Premier League goal at Anfield since December 2018, hit the post. This onslaught didn’t last too long thankfully and we showed our intention with Jay Rodriguez forcing Alisson into a save.

Wood, on his first start since March, was given 65 minutes and saw Vydra replace him in a double substitution that also saw Jόhann Berg Guðmundsson come on for Erik Pieters who, yet again, had done a good job for us on the right hand side of midfield.

The subs had only been on for a couple of minutes when we won a free kick for offside. Looking at his watch, referee David Coote took the opportunity  to call the drinks break during which Liverpool made a double change of their own, bringing on Alexander-Arnold and Naby Keita. They were in for a shock.

The free kick restarted the game. We played it into the penalty box on the left hand side and Tarkowski got up to win a header back into the middle. There was Jay Rod to get to it, turn and hit a perfect shot into the bottom left hand corner. VAR took a look for a potential offside, but not even a goal against Liverpool at Anfield could be ruled out. We were level; Liverpool were rattled.

Embed from Getty Images
Did we think an onslaught was coming? Was it going to be a real battle for the remaining twenty minutes plus? Absolutely not, we were every bit as good as they were now, probably the better side, and we had opportunities. By the time Mohamed Salah saw yet another effort saved by Pope at the end, we’d come really close twice with the final ball into the box just inches away from the onrushing Vydra and then, following a corner we nearly scored again.

Klopp didn’t like us getting corners because we dared to put his goalkeeper under pressure (see second action picture). Apparently we should just allow him to catch the ball and get on with things. He punched again as Ashley Westwood swung in a left wing corner. It found itself back with Westwood, via Tarkowski, and he punched again, this time only to Guðmundsson who smashed the bar. He was already public enemy number one by then with Liverpool believing he’d given away a penalty and it might have been, but he was inches away from emulating the side of 1974 and winning it for us.

Of course we’ll pick out Pope for his first half performance, and I’ve already referred to Long and Pieters who have been exceptional since they returned to the side. Josh Brownhill continues to defy logic for a player so inexperienced at this level but then there is every other player who stepped out onto that pitch at any time yesterday.

Brilliant Burnley. It really was awesome at Anfield and my only regret was not being there to see it in person.

It’s always good being a Claret, it isn’t too far short of sixty years now for me, but this is one very special time to support this wonderful club of ours.

Wolves next, and that will be really tough. BBC and Face Time awaits.