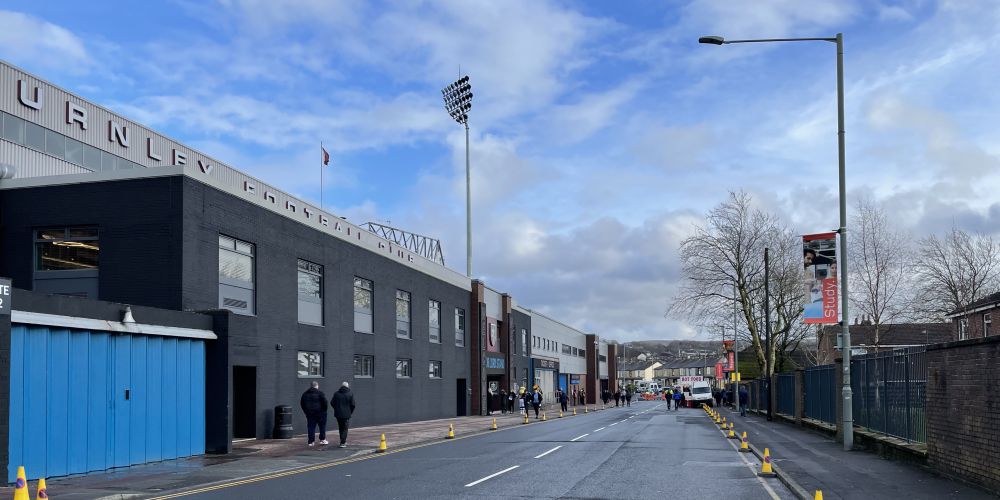 Burnley recorded a seventh straight win in the Championship with a 1-0 home victory against Coventry City, the only goal of the game coming from the unlikely source of central defender Jordan Beyer.

It came via a corner with no more than eight minutes of normal time remaining, just as we were beginning to think we were going to hit a blank sheet for the first time in the league since we were beaten at Watford and it retained our five point advantage at the top of the league.

Winter was back yesterday; it was a bitterly cold day with a biting wind so probably not the best of days to don my West Yorkshire Clarets hat and stand on foodbank duty prior. I was on the bins on Ormerod Yard, behind the cricket club pavilion, and it was so good to see more and more people donating, and it was nice to have a chat with people, some I know and others who I met for the first time.

While there, we were picking up news from the early kick off at Rotherham. I think it’s fair to say it went well. I reckon if we declared now, our local rivals probably wouldn’t catch us.

Embed from Getty Images
When the bins were ditched and it was time to go in, I thought we were going to miss kick off. The queues for the Longside Upper were huge but, as it transpired, only at one end. We went to the turnstiles at the other end and walked straight in.

As expected, from last week’s team that beat Bournemouth in the FA Cup, Arijanet Muric returned for Bailey Peacock-Farrell while Charlie Taylor moved across to replace the injured Taylor Harwood-Bellis in the centre of defence with Ian Maatsen back at left-back. Jack Cork and Jay Rodriguez were both back in at the expense of Jóhann Berg Guðmundsson and Ashley Barnes.

This was the designated game for the annual In Memoriam that was introduced ten years ago following a request to the club from Burnley FC Supporters Groups. It’s always a poignant moment for us all and, as always, there were a number of names on that list of people I’d known, one I didn’t even know had passed away.

Sadly, and shockingly, some Coventry fans decided to ambush it with unnecessary chanting which forced referee David Webb to cut the minute short. What is it with some people? Can they not show respect? Can they not keep their mouths shut for a minute while others do show respect?

Embed from Getty Images
Their team, undoubtedly, had a better time than they did, particularly in the first half when they were much the better side. During the foodbank collection, it had remained fine, but in the early part of the game, the heavens opened but, with the strong wind behind them, Coventry were very much in the ascendancy.

In a half devoid of much quality, hardly a surprise in the conditions, we struggled to make any sort of impact and for all they were better than us, they didn’t officially have an effort on target although the one save Muric had to make from a cross/shot, looked to be going into the top corner for me.

They should have scored though. Jamie Allen had two decent chances, both of which he spurned. Their one other big chance went the way of Kasey Palmer but Maatsen, who the away fans booed throughout as they’d done in the game at Coventry, got in a good block.

Maatsen had a good season playing for Coventry. Quite why that entitles him to the abuse now is beyond me. We’ve not had that many long term loans, prior to this season, who have had a big impact but I keep thinking about Gary Cahill who was always awarded a good reception when he later played against us, even when on loan at another club, in his case Sheffield United. I suppose it’s that respect thing again.

Embed from Getty Images
Anyway, I was pleased to see half time reached with the score 0-0 with the hope that the second half would surely be better and it was with Vincent Kompany replacing Jack Cork, who had picked up his tenth yellow card of the season and a two match ban early in the game, with Guðmundsson and what a difference he made.

It needed a good start to the half but we might have fallen behind in only the third minute and probably should have after a horrible mistake from Beyer let in Coventry’s Viktor Gyökeres. It was an awful back pass that fell to the Coventry player but he just couldn’t get a shot in. He went past Taylor; he went past Muric but Josh Brownhill had got back to get in a superb challenge to deny a player who surely is bound for somewhere better than Coventry very soon.

It was brilliant from Brownhill, covering the amount of ground he did and then the perfect challenge. As for Beyer, for balance, it was an awful error but probably the only mistake he made all afternoon in what was again another outstanding performance from him.

I don’t think Coventry ever offered much of note after that incident and we started to get on top with the brilliant JBG pulling most of the strings. One ball in from the left went through to Manuel Benson coming in from the right. It was the perfect position for Benson who is so dependable in that position. I waited for the net to bulge but he fired wide. Soon after he departed, along with Jay Rod, and on came Nathan Tella and Ashley Barnes.

Embed from Getty Images
Now, we really stepped things up and there was a ten minute spell when we were so much on top that a goal looked inevitable. We forced Ben Wilson into a save to deny Tella but, unfortunately, the goal didn’t come although we didn’t have much longer to wait. By the time it did, Coventry could so easily have been down to nine men.

If you do a bit of time wasting when David Webb is refereeing, you will undoubtedly get away with it. Quite how on earth he didn’t yellow card their goalkeeper Ben Wilson is beyond me but he finally reacted when Coventry delayed a throw on the left hand side, a throw that shouldn’t have been given with the ball not having gone out of play. He carded Fankaty Dabo but I believe he clearly carded the wrong player; it should have been Brooke Norton-Cuffy who had already received a yellow card.

When we next won the ball back, we got it to Guðmundsson who moved it out wide to Anass Zaroury. It all ended with the ball going out for a corner on our right and all hell breaking loose inside the goal. Coventry manager Mark Robins dared to suggest it was dirty tricks on our behalf but if he takes a look, Tella is accidentally pushed into their goalkeeper by Gyökeres. Both Wilson and Tella got yellows but Wilson, like Norton-Cuffy, can consider himself very fortunate to still be on the pitch.

I liked the goalkeeper’s next touch; it was to get the ball out of the net. From the resulting corner taken by Guðmundsson on the right, Beyer, whose run had lost Dabo, headed home. Apparently, this was his first ever goal in professional football. He ran towards the Bob Lord to celebrate but seemed to be lost as to what to do. His team mates helped him.

Embed from Getty Images
We were just about to bring on Scott Twine but he was immediately sat down again. I suspect he might have been coming on for Zaroury who eventually went off just over a minute from the end of normal time with Samuel Bastien coming on.

“Top of the league, you’re having a laugh,” sang the Coventry fans during the first half; “We are top of the league,” the Burnley fans were responding with now.  And following four minutes of uneventful stoppage time, most of it added for their time wasting, the game was won.

That’s a seventh successive win, and an eighth successive home win in the league. Only once previously, in my years of watching Burnley, have I seen us win that many in succession at home in one season. It’s equalled the eight Stan Ternent’s team recorded in 1999/2000. It seems an age now since we kicked off the season struggling to win at home, drawing each of the first three.

Delighted with the win it was time to make my way home but that proved not to be as easy as it should have been. I got caught up with some hostility at the Wellington crossroads where a totally out of control police officer decided to forcibly push me out of the way. As for the problems between the two sets of fans, I’ve no idea who the aggressors were but the whole situation was totally unacceptable.

Embed from Getty Images
Eventually through that and home. I’d been shivering with the cold inside the Turf so it was good to finally get some warmth and celebrate yet another win. Maybe not our best performance but another three points and now a sixteen point lead over third.

It will be tough this Friday against West Brom, still the best team I think we’ve played. But we are a damn good side too at this level and another home win would be good.