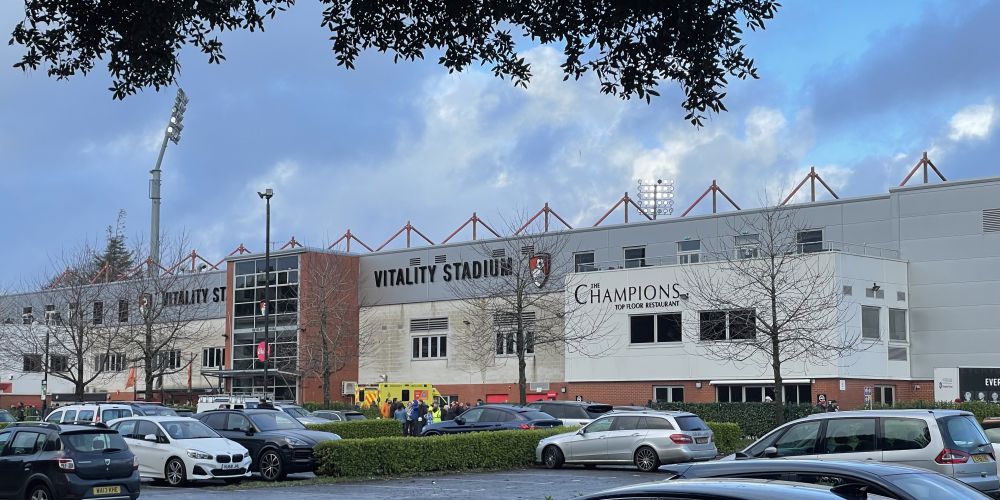 Burnley went through to the fourth round of the FA Cup yesterday with a 4-2 win at Premier League Bournemouth, our first win against a Premier League side since we knocked out Sunderland in the same round six years ago.

Two goals each for our wingers Manuel Benson and Anass Zaroury saw us through more than comfortably on a day when we were much better overall than the team sitting in the league above us, and this was another enjoyable day watching the Clarets in action to add to so many more this season.

A cup draw can be an exciting occasion. Of course, you want a home draw but if you can’t get that then a lower league team not too far away would be the preferred choice. I think we got the worst possible draw, a Premier League team away from home and the one furthest away meaning a long trip just days after Swansea and on paper probably a game we were not expected to win with it likely to be played in front of a small crowd.

I was sat at the County Ground at Leyland when we got news that we would be travelling to Bournemouth and, for me, this was another trip on the Supporters’ Club coach with a pick up soon after 6:30 a.m. There was to be no wonderful journey over the Brecon Beacons this time either, just the motorway network and the A34 for much of the journey down to the Dorset coast with me constantly reminding myself that on our last three visits we’d recorded Premier League wins. In those games, we’d seen Robbie Brady have probably his best ever game in a Burnley shirt in the first of them in an excellent team performance and then an even better performance in the next season when we won 3-1 in what was voted the best away performance of the season on Up the Clarets. The last visit was a 1-0 win courtesy of a Jay Rodriguez goal late in the day in what, overall, was a forgettable ninety minutes.

Embed from Getty Images
This, however, was the first time we’d ever met Bournemouth with them sitting ahead of us by a division and this was always likely set to be a very difficult game for us and a real test for the credentials of Vincent Kompany’s team.

For this trip, our usual gourmet pub stop had to be replaced with a visit to café at the Kings Park Cricket Ground just across the road from the ground so it was pie, chips, peas and gravy and a cordial chat with some home supporters who, I can tell you, are not happy with the appointment of Gary O’Neil as manager and hardly more so with the new American owner.

This is the FA Cup and you can expect team changes, that’s the nature of the competition these days. Around the time the last chip was being eaten we learned that we’d made five changes from the team that had won 2-1 at Swansea five days earlier but a quick look at the line up didn’t immediately suggest so many. Arijanet Muric, Ian Maatsen, Jack Cork, Nathan Tella and Jay Rodriguez were the five to sit this one out with Bailey Peacock-Farrell, Charlie Taylor, Jóhann Berg Guðmundsson, Manuel Benson and Ashley Barnes coming in.

Bournemouth opted to go strong with only a couple of changes from their previous game. While we’ve been winning games, they’ve struggled since their resumption following the World Cup and have lost their League Cup tie at Newcastle and three subsequent Premier League games without scoring a solitary goal. That’s a sharp contrast to the week before the break when they had scored no fewer than thirteen goals in four games.

Embed from Getty Images
We were sat in the Ted MacDougall Stand for this game, right next to Steve Fletcher who has his own stand behind the goal to the right of us. Both in their time had been top players for this club. Fletcher smiled his way through this one but I think it was very much through gritted teeth.

It took us only until the sixth minute to go in front. Marcos Senesi played a poor ball straight to Guðmundsson but then it was pure quality as JBG played a delightful ball forward and into the Bournemouth box. There was Benson who, without hesitation, smashed it home right footed without having to take a touch.

Unfortunately, we didn’t hold the lead for very long. Taylor Harwood-Bellis played a ball back to Peacock-Farrell who in turn pushed it forward to Josh Cullen. The midfielder attempted to play the ball across the box but the only player there was Bournemouth’s Ryan Christie and he had the simplest of tasks of firing into the empty net with Peacock-Farrell having no chance of getting back.

Cullen must have thought it wasn’t going to be his day soon after when he inadvertently took out Harwood-Bellis. The central defender resumed after treatment but not for long and had to withdraw before the half hour with Luke McNally, whose only previous FA Cup experience was in last season’s first round for Oxford, coming on.

Embed from Getty Images
Overall, we looked the better of the two teams but as the clock ticked on it was beginning to look as though the teams would go in level at half time. But then we struck, not once but twice with Anass Zaroury scoring both goals.

He’d come close with one effort that went just wide but when he robbed Lewis Cook of the ball, he wasn’t to be denied a second time. Barnes latched onto the ball and played in Josh Brownhill with a lovely ball. Brownhill, I thought, was set to shoot but saw the better positioned Zaroury, played it across to him and this time the wide man’s shot went into the unguarded net.

Just a few minutes later, Zaroury got down the left. He played a one-two with Brownhill, went through a group of defenders in the box and placed a right-foot shot past Mark Travers and into the far corner.

We just had one nervous moment right at the end of the half when referee Tim Robinson, who had a good game, just as he’d done at Sunderland when we won 4-2, awarded a free kick against us just outside the box. The laws of the game allow for time to be added at the end of each half for a penalty so he had every right to blow long before they took it. From the free kick they won a corner and incredibly, now being over a minute beyond the four added, he allowed them another opportunity from the corner before finally signalling the end of the half.

Embed from Getty Images
While there was forty-five minutes remaining, I felt confident that we could go on and win this although it took less than three minutes of the second half for that confidence to reduce when the home side, who had made three half time changes, pulled one back. McNally, who after a nervous start, was doing well, played one bad ball but it finally went out of play for a throw on their right. Eventually, Christie was able to slip a ball in for Dominic Solanke. Peacock-Farrell did well to stop his shot but the Bournemouth forward headed the rebound in and they were back in it.

All the nerves were eased soon afterwards as Benson joined Zaroury in scoring twice. Just after Zaroury had come close to a third, Christie gave the ball away with a bad header. It fell to the brilliant Barnes and he slipped in a superb ball for Benson to run onto and hit home with his left foot.

There was to be just one nervous period with just over twenty minutes remaining when Bournemouth won a series of corners. From one of them, Barnes cleared a Christie header off the line with Lloyd Kelly heading the rebound against the post. That was the only moment of any concern as we saw out the game without any more worries and it was us who looked the far more likely to score.

So, 4-2 it was and a comfortable 4-2 at that and now just the long journey home to look forward to. It’s never anything like as bad when you’ve won and the only hold up was at the Bournemouth end due to some road works that seemed to hold us up for an age.

Embed from Getty Images
Winning away from home in the FA Cup is not something I’ve seen too often watching Burnley and this was only the third time I’ve seen us score this many goals on the road in the competition. There was the 9-0 win at Penrith in 1984 and in the 1973/74 season we beat Oldham at Boundary Park in the fourth round on our way to the semi-final. The good news is we can’t play Newcastle this season.

The Burnley fans taunted the home supporters with chants of “We’re going up, you’re going down”. We will see in the next few months whether that will happen. What is certain is that we are ball number 11 in today’s fourth round draw. If it must be an away tie, please not quite so far away as Bournemouth.

That’s some miles covered since setting off for Stoke nine days ago, but it is always more than worth it when you see this team win all three. It’s nothing but enjoyment at the moment and long may that continue wherever they send us.