The name of Billy Dougall is one that too easily fades into the background in the history of Burnley FC but that should never be the case. Dougall was a very influential figure who served the club over five decades.

With Alan Brown leaving to go to Sunderland a month before the start of the 1957/58 season the club handed the job to the long serving coach as the players reported back for pre-season still reeling from the loss of Brown. 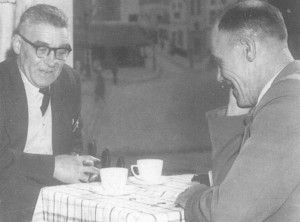 Dougall had first joined Burnley as a player in 1926 and had previously played for both Hibs and Falkirk prior to his move to Turf Moor. He became a first team regular immediately but his playing career sadly came to an abrupt end just over two years later after suffering a serious cartilage injury.

He returned to Scotland to train as a physiotherapist but was back in football by 1930, taking a coaching role with Thames before moving to Charlton. In 1932 he returned to Burnley as reserve team trainer and two years later stepped up into the same role with the first team.

That was the position he held until he was offered the manager’s job at the age of 61 but by then he was already suffering from ill health and in November of that year another great Burnley stalwart Ray Bennion (pictured to the right with Dougall) had to take over as acting manager as Dougall underwent hospital treatment.

Dougall was forced to resign his position as manager on medical grounds but was appointed as the club’s physiotherapist as Burnley became one of the top sides in the country. His partner Bennion was first team trainer during this period.

He retired in 1965 but the ill health continued and in 1966, at the age of just 71 he passed away at his home in Brunshaw Road, Burnley, just a few yards from Turf Moor. The Dougall legacy though lives on. For many years his wife Jeannie continued to support the club and today members of his family are still Burnley supporters, his grandson being a welcome contributor to this site’s message board.

Tributes poured in at the time of his death and there were words from his three predecessors, Cliff Britton, Frank Hill and Alan Brown, as well as Harry Potts who was then manager. Potts said of him: “Over thirty years I have never heard one wrong word about Bill. He was one of the great names of English football and he did a simply marvellous job for Burnley Football Club,” while Bennion, who had worked alongside him for so long, added: “Bill had been my friend and colleague since the early thirties. I will miss him more than I can say. He had so many fine qualities and he knew football from top to bottom. In fact what he didn’t know about football wasn’t worth knowing. We travelled a long and often tough path together and his passing leaves a great gap.”

Former Claret Jimmy McIlroy said of him: “He taught me more about football than anyone else,” while chairman Bob Lord, who referred to him and Bennion as two jewels, the finest servants a football club could ever had, paid tribute: “There is no doubt that Bill Dougall has been a most capable, devoted, loyal and conscientious member of Burnley Football Club during the whole of his forty years at Turf Moor. Many players have passed through his fingers, so to speak, and all of them have cause to thank him very much. He was endeared by all who were privileged to know him and he will surely never be forgotten. he was a great player and as a trainer-coach was also absolutely outstanding.”

Six Burnley players, all of whom had so much to thank him for,  Alex Elder, John Angus, Gordon Harris, Andy Lochhead, Brian Miller and Dave Merrington acted as bearers at his funeral at which all of Burnley’s directors, staff and players attended the Requiem Mass.

Many supporters of today will not even know the name of Billy Dougall, but they should, they really should. As a manager, his time was short but he should always be remembered as one of the greats of Burnley Football Club.