Anyone with any connection with Blackburn Rovers, Hartlepool United, Bury, Burnley and Swansea City Football Clubs will be devastated today with the news that former player Lenny Johnrose has passed away at the age of 52 following a five-year fight against Motor Neurone Disease.

A hard, tough midfield player, we’ve all got to know Lenny much more in these recent years as a gentle man with great humour and great resolve while also becoming a wonderful fundraiser for MND. 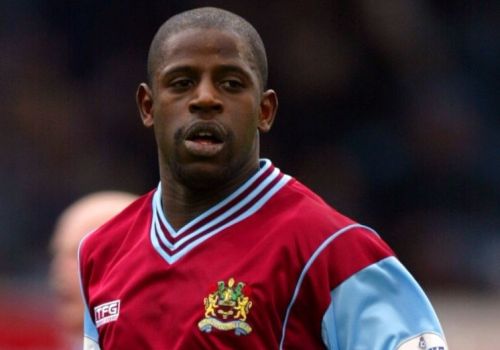 I, like many Burnley fans, was in Greece for the Olympiacos game when he broke the news of his illness. I remember watching the video at a time when I was with a friend who himself was fighting the same disease.

Although I didn’t know Lenny personally, I felt I did through his social media humour, through reading his book and getting the chance to speak to him in person at the Turf last season.

As a footballer, he came to Burnley from Bury in early 1999, making his debut in a home draw against Reading. He played the full ninety minutes although his second appearance didn’t last quite so long; he was sent off in the 24th minute of a 2-0 defeat at Wycombe and rightly so. Lenny himself jokingly told me that he was just a bit late with a challenge.

Not much over a year later, in May 2000, he was in the Burnley team that won at Scunthorpe to clinch promotion under Stan Ternent, the manager for whom he did so well both with Bury and with us.

He remained with us until the end of the 2001/02 season, although he hadn’t played a first team game since the 3-2 win at Preston in the previous December, but with no money around, he was back for a brief time in the following season before moving on to Bury and Swansea.

He’s a big hero at Swansea. In what was their ‘Orient Game’ moment, they were being held 2-2 in a must win game against Hull. Lenny scored their third as they went on to win 4-2 and survive.

Incredibly, they parted company with him during the next season and he once again returned to Burnley, playing the final game of his league career on the final day of the 2003/04 season against Sunderland as Stan said his farewell.

Lenny went into teaching and for a while taught at Lowerhouse Primary School in Burnley, but that had to end because of his illness. In November 2018, a fundraising game was held at Bamber Bridge and I was shocked that day to see how difficult he was already finding it to walk.

MND is an awful illness and it took away so much more of him but he fought it every inch of the way. So many times he made me cry, but so many times he also made me laugh. He has simply been so brave and taken on this dreadful disease with dignity and an amazing show of strength. Lenny has been nothing short of an inspiration to so many of us.

I am so saddened today to hear the sad news. His former captain at Burnley, Steve Davis, tweeted: “RIP Len, a real fighter and an inspirational lad to us all. Always positive and had a dry, witty word or a smile despite his MND.”

Hugely popular with his former team mates, and a great friend to them. He will be very much missed by them and all of us. My thoughts are now with his wife Nadine, his children Patrick and Elizabeth along with all his family and friends.