Burnley Football club was in a mess, a big mess. We’d had six different managers in just over three years, suffered two relegations, and the very future of the club was threatened as the debts spiralled.

Mercifully Tommy Cavanagh had gone, the policy change of appointing managers from outside the club hadn’t worked and the board, finally increased to six with the appointment of three new members, turned to the manager who had been sacked in January 1983, Brian Miller. 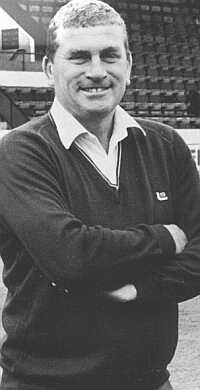 Miller was stunned with just what he found. He had hardly a squad worthy of the name and said he was shocked at the state of the training ground at Gawthorpe. He knew he had a tough battle on his hands but I’m not sure even Brian realised just how tough.

To boost the squad he brought back two former players in Leighton James and Billy Rodaway, realised he was going to have to play Joe Gallagher, and by the time the season got underway on the Devon coast at Torquay he’d added Wayne Entwistle and Ian Britton on loan from Bolton and Blackpool respectively. Britton finally made the move permanent and not even Miller could have known how shrewd a move that signing would be as the 1986/87 season unfolded.

It didn’t get off to the worst of starts, we had twelve points in the bag from the first seven games, but then reality set in and there were some awful defeats. Eventually we faced that last match of the season against Orient with our league future at stake. The game is well documented elsewhere on Up the Clarets but suffice to say it was the most important game our club has ever undertaken. Burnley were bottom of the Fourth Division. Most Burnley fans would have never thought it possible, and yet the manager received no criticism at all. There were no shouts for his head simply because everyone realised what a difficult task had faced him when he returned.

Having got us through that, Miller set about rebuilding the team and no fewer than eight players made their debuts on the opening day of the following season. We never really threatened to win promotion, although we did lead the table after the first few games. We finished in tenth place but at the end of May 1988 we returned to Wembley for the first time in 26 years to take on Wolves in the Sherpa Van Trophy Final. It was so fitting that Brian Miller, the local lad who had played for the club and gone on to manage it twice, should lead out the side and it was a fantastic day for him even though we were beaten 2-0.

Money was still tight. There were just three free transfers added in the summer of 1988 and yet we made a fantastic start to the season, again leading the table. It all eventually became unstuck and after a 2-1 defeat at Tranmere in January Brian decided to call it a day as manager just before his 52nd birthday.

His entire career had been spent with Burnley and he wasn’t finished yet. For the next eight years he continued as chief scout before taking a well earned retirement in 1996. Not as though that kept him away from Turf Moor, after all he was a Claret. He was still there for every game, supporting the club as he’d done throughout his life. That was until early 2007 when illness prevented him being at his beloved Turf Moor.

Brian Miller sadly passed away on 7th April 2007 on the day Burnley fittingly won 1-0 at Birmingham City in a game refereed by a Mr Miller with then manager Steve Cotterill dedicating the win to Brian. Two days later Turf Moor stood as one in silence for one of their own ahead of the home game against Cardiff and a week later Harry Potts Way was lined as he made his final journey past the ground. His second spell as Burnley manager might not look too good in the record books, but we should all be eternally grateful for the way he saw us through our darkest times and helped bring us out on the other side. I’m not sure anyone else could have done it but he did it with real dignity alongside his amazing passion for the club. He certainly handed us over in a far better state than he’d found us when he returned in the summer of 1986.