The departure of Harry Potts led to Bob Lord making what proved to be his final managerial appointment and after being with the club as player, trainer and coach it was Brian Miller he turned to as the club sat in a precarious position at the bottom of Division Two. 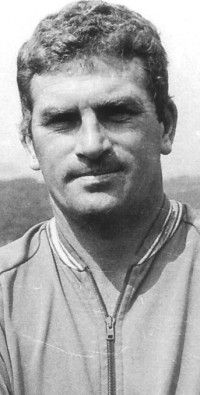 Brian had been more than a one club man, he’d played over 450 games for Burnley, captained the side, played for England and after his player career was brought to a premature end he continued as trainer and coach until getting the call to replace Potts, the second of the title winning team, following on from Jimmy Adamson, to land the manager’s job.

We were still looking for our first win of the season on his appointment and it was to take another six games before it finally came against Cambridge in a 5-3 win at Turf Moor, bringing an end to a run of 24 league games without a win, the worst in the club’s history. That win was one of six in the next ten league games, with only two of them ending in defeat. It brought a renewed belief that we could avoid the drop but there were to be no more victories in any of the 16 remaining games which brought the inevitable in May 1980 as Burnley dropped out of the top two divisions for the first time in the club’s history.

Miller had signed Billy Hamilton in December 1979, his first signing, but we also saw the departure of players such as Paul Fletcher, Leighton James, Steve Kindon and Peter Noble which meant, with the club in the third tier of English football for the first time, he set about rebuilding the squad in the summer of 1980. There were a handful of new signings, including Oldham full backs Ian Wood and David Holt, Tommy Cassidy from Newcastle, striker Steve Taylor who arrived from Mansfield and not long into the season Eric Potts was signed from Preston. Even so, the 1980/81 season was something of a disappointment and an eighth place finish.

Things looked even worse when we lost six of the first eight games of the 1981/82 season but we then went on an amazing run that saw us lose only two more game and clinch the league title. Such were the finances at the club that the only new signing during that season was Paul McGee from Preston but it also saw the introduction of Trevor Steven to add to such as Brian Laws, Kevin Young, Micky Phelan, Vince Overson and Andy Wharton who were all establishing themselves in the first team.

Back in Division Two, Miller so wanted and needed to strengthen the squad. He had apparently lined up deals for some very good players including Danny Wilson, Glenn Cockerill, Bolton midfielder Peter Reid and Newport striker John Aldridge. Unfortunately, nothing materialised and the squad remained the same although Miller was now without influential defender Overson who had suffered a long term injury.

It proved to be disastrous as defeat followed defeat and only a good League (Milk) Cup run lifted a season that was surely heading for another relegation. Who knows what Brian could have achieved had he been allowed to strengthen the squad in the summer, but he had to wait some months before he could sign any players and eventually was able to bring in Willie Donachie and Brian Flynn.

Inevitably it cost him his job, and in the cruellest of ways. As the team prepared to take on Spurs in the Milk Cup, and on the manager’s 46th birthday, he was relieved of his duties. The player who had made his debut in a long running FA Cup tie against Chelsea in 1956 left the club with immediate effect.