Burnley’s home game against Portsmouth in 1973 had been snowed off in January, but the Clarets served up a first half treat when the game was finally played to increase our lead at the top of the Second Division.

The storm over Central Baths was still brewing and the Burnley Express confirmed that a grand total of 75 children had written to them independently expressing their concerns over the potential closure. One nine-year-old girl wrote: “I protest about Central Baths closing. It is disgusting. Little children should be able to learn to swim without people jumping on their heads.” A boy of the same age explained: “If people are not taught how to swim at the right time, one day they may drown. Knocking the Central Baths down may be just like killing someone.” 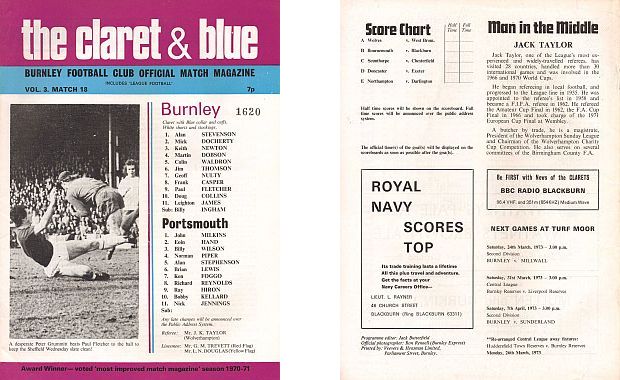 The council were unmoved and remained adamant that the Central Baths would be closed with a swimming pool included at the William Thompson Centre which would open in 1974. Alderman Thomas Gallagher, chairman of the town council’s Development Committee explained. He said: “When Padiham had no pool of its own we used to teach Padiham children to swim. Now, when Padiham comes in with us under the new local government setup, we shall have the benefit of their facility to add to ours.”

He hit out at teachers too, saying: “I am informed that as far as the present teaching situation goes in Burnley, that hours and hours during the week swimming instructors are stood in our present baths with nothing to do. There are no schoolchildren there to be taught. There is no need for any child to lose an opportunity to learn to swim, despite what the teachers’ association may say.” Referring to the problem that children will have to be taught in a pool also occupied by adults at the same time, he added: “I have seen such a system in operation in Guildford.”

Away from the baths, one woman found herself in trouble with the police twice in two days. On day one she was seen in a telephone box in Todmorden Road kicking at the glass and shouting and screaming. Police were called and they found her lying on the floor still shouting and screaming and in a drunken state. She refused to be quiet and had to be arrested. Three panes of glass were broken to the value of £2.66. She hadn’t learned her lesson and the day after was seen leaving her home in the early hours of the morning. She was shouting and swearing at the top of her voice and refused to be quiet. She was in a drunken condition and had to be arrested again. After appearing in court, the magistrates deferred a decision for four weeks, and she was remanded on bail.

Some people enjoy entering competitions and that was certainly the case for Mrs Margaret Gray. She’d entered a Burnley Express competition which involved writing a story about removal day. In hers, Margaret relayed the story of the mess she found when she arrived at her new home and how her new neighbours helped her to get things in order. Such was her story that she won the first prize. “I can hardly believe it,” she said. “It’s like a silver wedding present but better.” I had to go and look to see what she’d won that was so much better than her silver wedding presents and learned she, and husband Joe, had won a meal for two at the Keirby.

It was good news for Margaret but not for those employed by Vokes. Workers at both factories staged a half-day token strike and voted to work to rule. This followed a mass meeting held to combat threats of redundancies. Vokes’ failure to provide information about the possible redundancies was described by union leaders as callous manipulation of capital investments. “Vokes are callously manipulating the lives of their employees,” said union official Mr Peter Kennedy.

The bus drivers and conductors had started their action too with the cancellation of Saturday services after 9 p.m. due to hooliganism and vandalism. They’d come up with an idea to have two way radios to fight the threat but that was ruled out as a non starter with buses travelling too far from the depot.

Tuesday night meant football with this re-arranged game against Portsmouth and manager Jimmy Adamson made a plea to fans ahead of the game, asking for more support to help the team overcome their Turf Moor concerns having collected only one point in the previous two home games. “In recent home games we have been too anxious. Perhaps we have been trying too hard,” Adamson said. “When we are trying to break down these massed defences the fans can become frustrated. If they start getting at the players this frustration spreads to the pitch and things go worse. We would prefer to hear the fans giving us their support in this situation. They can help lift the team and make them play better.”

Those fans almost didn’t include me. It looked as though I was going to be stranded in Sheffield with afternoon lectures but the one person on my course who owned a car came to my rescue. I sort of persuaded her to drive me over and a couple more joined us, one a Newcastle fan and the other a West Brom fan. I’m sure Lynda won’t be reading this article. She didn’t then, and still doesn’t, have any interest in football and I think she was a bit bemused at her 90 minutes on the Longside. I was indebted to her because it was one I really didn’t want to miss.

Adamson delayed naming his team because no fewer than six players were doubts because of injuries sustained in the win at Cardiff three days earlier. Four were thought to be certain to play but there were big doubts about Keith Newton and Billy Ingham. As it turned out, only Ingham missed the game. Doug Collins returned in his place with Eric Probert, fit again after a long term injury, being named as substitute.

More intriguing was the news from the Pompey camp. Former Claret Ray Pointer was on the Fratton Park staff as youth coach. He hadn’t played in over a year but had been turning out for their nursery club Waterlooville. Astonishingly, manager Ron Tindall included him in the squad for this game although he was not expected to feature, but when the teams were announced he was confirmed in their number four shirt. Pointer, a real star of the Championship side of thirteen years earlier, led the visitors onto the pitch. Turf Moor rose as one to its former hero. The Blond Bombshell, Burnley’s highest post-war goalscorer, looked visibly moved as he acknowledged the support of his former fans.

Unfortunately for him, and for his team, it was their only highlight of the night as Burnley turned in one of the most scintillating 45 minutes of football the ground had seen for a very long time. After the tense, nail biting matches of recent weeks, this was a really joyful occasion and manager Adamson was happy as the fans answered his plea for loyal support. Those fans were happy too as Burnley gave them what they wanted, some simply superb football backed up by exciting goals.

We won the game 4-0 and all four goals came in that incredible first half that even included a missed penalty from Frank Casper. We had to wait a quarter of an hour for the first one. It featured a fine right-wing run by Mick Docherty after Newton and Casper had started the move. Docherty’s cross to the far post was headed back by Paul Fletcher and Geoff NULTY completed the job with an overhead kick into the net. It was just what Burnley wanted and needed, an early goal to settle things down, and two minutes later there was another to celebrate.

Nulty’s defence splitting pass put CASPER clear. He appeared to momentarily lose control but then burst through Alan Stephenson’s tackle, drew goalkeeper John Milkins and slotted the ball in. It was fantastic stuff and just before the half hour it was 3-0. Nulty’s high lob into the penalty area was half cleared to Leighton James who cracked in a fierce shot. It looked a certain goal until Eoin Hand scooped the ball off the line only for FLETCHER to head it back into the net via a post.

ine minutes before half time came the fourth goal, and the best of the lot. A long cross to the far post by James was headed back by Fletcher. CASPER raced past the flat footed defence to slam a half volley into the roof of the net. A superb move brilliantly finished off.

The second half was never going to live up to that. Portsmouth sat deep to ensure the goal avalanche didn’t continue and Burnley had to settle for that 4-0 win. It was more remarkable for the fact that neither Newton nor Collins were anywhere near fully fit. Both suffered recurrences of their injuries too with Newton finally being forced off to be replaced by Probert.

Adamson was delighted. “The fans were marvellous,” he said. “They answered my appeal for more encouragement in the best way possible. The players really appreciated it and this went a long way towards helping us to play so well. When Frank Casper missed the penalty the fans really got behind him and lifted his game. They were tremendous and I can’t thank them enough.”

Captain Martin Dobson, again in outstanding form, said: “The attitude right through the side was that we were going to score a lot of goals. We wanted to give the lads in defence a bit of a break. We’ve been a bit disappointing with some of our home performances  and we wanted to show the fans what we could do. They were a great help to us and we were happy to return the favour.”

Burnley had simply torn Portsmouth to shreds. This really was the performance the fans had been waiting for.

The win had taken us three points clear of QPR at the top although they did have a game in hand. More significant was the nine point lead we held over third place.

At the other end of the table, bottom club Brighton had just won two and drawn one of their last three games. It had given them some chance of avoiding the drop but they were still seven points from safety.

They’d beaten Carlisle and, in the other midweek game played, Sunderland won at Deepdale which meant Preston had drawn two and lost seven of their last nine games. With only one win since November it had seen them drop from 4th to 17th in the table.