League leaders Burnley lost the battle of the top two clubs in 1973, going down to a 2-0 defeat at Loftus Road against second place Queens Park Rangers, bringing to an end an unbeaten away run that had stretched back to the previous Easter. 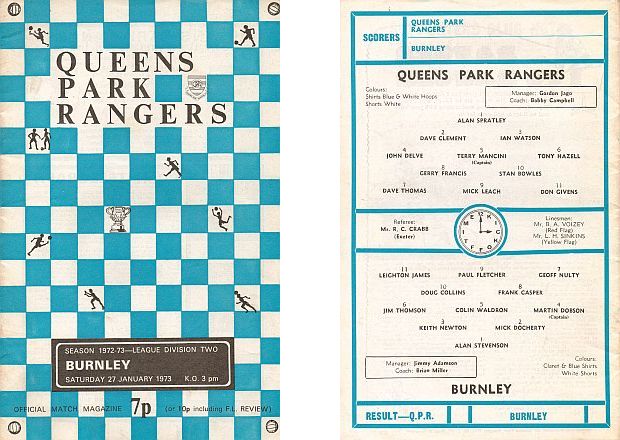 Battle lines were being drawn up in town too with the Gannow Residents’ Association ready to move into action once the final plans for the Calder Valley highway were announced. The association was ready to step into action and seek financial aid should their district be hit by the route for the new road.

Chairman of the GRA, Mr Ronald Bushby, a former mayor and Alderman, said: “We can’t do a lot at this stage until we get the final plans, which should be available by the end of February. If, having seen these plans, we decide to go forward with our fight, we shall have to start seeking financial support. We learned something from this week’s meeting but we still feel that this road is entirely unnecessary.”

Airy fairy. That’s how Alderman Tom Gallagher described the plans for a new concert hall and theatre in the town. Plans were afoot for a new £450,000 Arts Centre in Burnley and the Burnley Express, who recognised the need for thought and care in spending public money, said Gallagher’s statement was a bit late in the day. Agreements had been made over the past year with the Alderman seemingly happy but now he’d about turned but did say that an all-party deputation would meet the Mid-Pennine Association for the Arts to talk about cutting the scale of the project. His comments left the MPAA fuming.

The football pitches at the Prairie were in the news again when two games had to be postponed to prevent serious injuries to players. “The pitches were so full of holes and ankle deep in mud, players could easily have broken legs and ankles if the games had gone on,” said Mr George MacDuff, the fixtures secretary of the Burnley and District Amateur Combination. This again brought up the decision to allow the Burnley Agricultural Show to be held on the Prairie in the previous year, a decision that had caused untold damage to the pitches because of which a petition had been signed by almost 1,000 people to try and prevent the show being held there again. “We don’t blame the Parks Department for any of this. The real culprit is the Burnley Agricultural Show,” blasted MacDuff.

There were problems for customers at the chip shop in Scarlett Street, off Coal Clough Lane, or more accurately there were problems for owner Wong Tim Chan. When public health inspectors visited his shop they found dirt and grease on floors, walls and cooking utensils, rubbish strewn about and a soiled nappy on the floor in a food room. That led to an appearance in front of the magistrates where he was found guilty of six offences of contravention of food regulations. The punishment was a £44 fine made up of £20 for carrying on a business in unsanitary premises, £10 for failing to keep clean articles with which food came into contact, £5 for failing to keep a sanitary convenience in an efficient order and £3 each for three further offences.

There was news of a London company, one with no connections with Burnley, investing more than £120,000 in property in the town with a further investment of £250,000 to come. The company were Yorkglade Investments Ltd. Mr Derek Gaterell was conducting the negotiations and he explained there were two reasons for the decision to invest in Burnley. One was a soft spot for Burnley Football Club and the other an admiration for Mr Bob Lord.

The council confirmed that its next mayor would be Councillor Frank Booth and what an honour it was going to be as he would become the last ever mayor of the County Borough of Burnley with the status to be lost in 1974.

Opportunity was certainly knocking for Burnley’s Top Trek winner James Murray. He got a slot on the television talent show with Hughie Green. I’m not sure whether he was beaten by a man flexing his muscles or the likes but he didn’t win as he looked to build up his new career as a singer.

Burnley were off to Queens Park Rangers with supporters travelling on the new League Liner train. It proved to be a big success with supporters able to watch films, dance in the disco, eat tripe with Bobby Driver and enjoy a chicken drum stick and a pint served by club staff. Bob Lord drove the train to Crewe, or so he claimed, and he was joined by all the players and staff on the way home from London. One Burnley supporter, Terry Walton, travelled with his girlfriend Janet to the game. It was only their second date and I’m not sure what she thought of having to travel all the way to London and back with football supporters. She must have enjoyed it to some extent because Terry and Janet later married and are still together today having had two sons who have followed in dad’s footsteps and become Burnley supporters.

Ahead of the game, Dave Thomas had been giving it plenty. The former Claret now with QPR was claiming that it would be his side that would win the league and that Burnley would have to accept winning promotion as runners up. Burnley arrived at Loftus Road with an astonishing away record in the league with seven wins and six draws in thirteen games but that sadly ended as QPR recorded a 2-0 win. The way things went for Burnley they might as well have stayed at home, it just wasn’t their day.

The Clarets were definitely below their best and came up against a QPR team in top form. The slippy pitch favoured the style of QPR as did the performance of referee Ron Crabb of Exeter who gave Burnley nothing. It was the first away defeat since 3rd April 1972 at Sunderland. The last three games of the 1971/72 season on the road were all won making the run even better.

That run was always going to come to an end and it did against a side that had the power of Gerry Francis and Mike Leach in midfield and the quality of forward players Stan Bowles and Don Givens. QPR were so much on top in the opening exchanges that they could have had a sack full of goals in the first twenty minutes. No side, not even Liverpool in the cup, had opened us up like this and they made Burnley look a very ordinary side. They didn’t get a sack full but they did score twice to ensure the points were not coming back to Lancashire.

The home side went in front on the quarter hour. They built the move up down the right with Francis and then John Delve, the youngster who had come in at the last minute for the injured Terry Venables. He measured his cross to perfection for LEACH to run in from the edge of the penalty box to head home past Alan Stevenson. The difficult start had suddenly become more difficult. We’d hardly recovered when that lead was doubled. Doug Collins gave the ball away to Leach too easily in the midfield. Leach played the ball through for GIVENS, who had already missed two good chances. He took on Jim Thomson before hitting a shot across Stevenson into the bottom corner.

Burnley needed a goal and thought they’d got one when Terry Mancini let in Frank Casper. His shot hit goalkeeper Alan Spratley, flew into the air and then dropped towards the empty net. Ian Watson cleared but the ball had clearly crossed the line only for the linesman to make no such signal and so the goal was ruled out.

We had our chances in the second half. Paul Fletcher clipped the bar with one header and put another wide. Collins should have done better with one opportunity but fluffed his shot. But QPR remained the better side and there was no doubt they fully deserved the 2-0 win which took them within a point of us.

It was the first bad weekend we’d had in some time. Besides losing to the team right behind us in the table there were also wins for each of the five teams directly below QPR which had closed things up very much at the top of the league.

One point ahead now, we still had a four point lead over third and with only 12 of our 26 games played having been at home. It was back home for us in the following week against a Huddersfield Town team who had been relegated from the First Division at the end of the previous season.

We’d bounced back from the only other league defeat of the season with four successive wins and the hopes were that we could repeat that.