Bringing in the New Year at the top 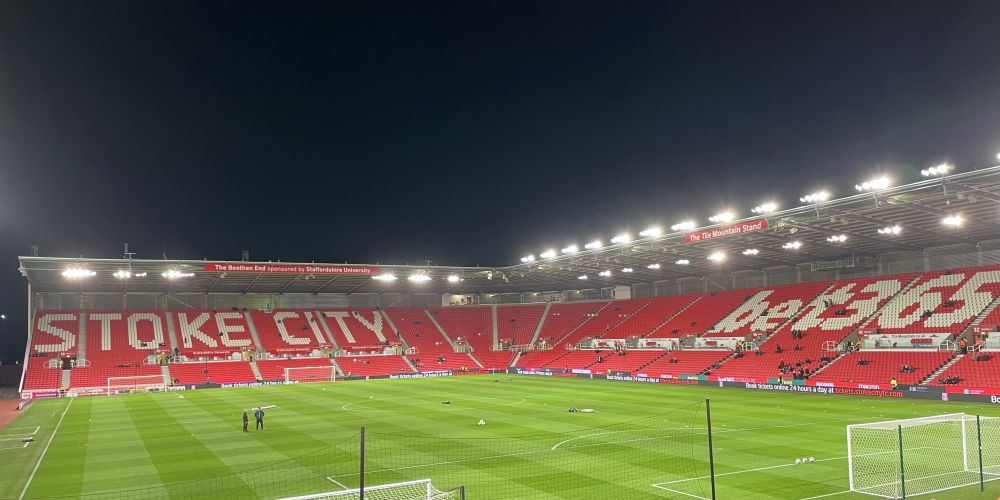 A week ago, our home win against Middlesbrough ensured we would go into Christmas at the top of the league and last night’s 1-0 victory at Stoke City confirmed that we will still be number one as we move into 2023 tomorrow.

It was the first time we’d been top at Christmas since 2013 but it is twenty-one years since we were there as we moved into a new year and then we lost that lead on New Year’s Day, never to regain it.

This cannot a report of another flowing big win, as much as I’d like it to be. This latest victory came following a dogged ninety minutes that just about got us through to this slender 1-0 win via a Josh Cullen goal, his first for Burnley, just after the hour.

Christmas has taken its toll on our group in terms of numbers so it was the Supporters’ Club coach for me for the first time since early season and it got us to the bet365 Stadium in very good time, and long before the team news was released. That team news, when it came, showed two changes from the team that had beaten Birmingham on Tuesday night with Darko Churlinov and Ashley Barnes coming in for Anass Zaroury and Jay Rodriguez. For Churlinov, it was a first league start.

Embed from Getty Images
The gentleman, and I use the term gentleman very loosely, to my right for this game was adamant that it would be a cakewalk and that we’d win by at least four goals. I don’t mind optimism but I do think it should include some reality and this proved to be a tough game for us, particularly in the first half when, arguably, Stoke might have felt worthy of a half time lead.

Most of the big moments in the first half were Stoke’s and they might have had an early lead when they got through on the right. Ian Maatsen and Arijanet Muric collided and that left Tyrese Campbell clear but virtually on the line. He played it across but there were no Stoke players there enabling Taylor Harwood-Bellis to clear.

At the other end, Manuel Benson went down under a challenge. Referee Keith Stroud gave nothing. It was difficult to see, obviously, from the other end of the ground, but I’m told that it was a foul although outside the penalty box and therefore should have been a free kick.

Campbell made a mess of Stoke’s next opportunity after Muric had passed the ball straight to him. This time he fired the ball straight at Connor Roberts and we cleared again comfortably. Shortly after that, Campbell did have the ball in the net following a left wing corner. He turned the ball in after Muric had saved a header but the referee awarded a free kick in our favour. Campbell was, as it happens, in an offside position, but the whistle had already gone for a foul.

Embed from Getty Images
Stoke came close again from another corner. This time Harwood-Bellis cleared a goal bound effort from virtually off the line and the follow up shot from Morgan Fox brought an excellent save from Muric.

We’d hardly threatened and I think we were all happy to go into the break at half time with the scores level at 0-0. Stoke had given us a hard forty-five minutes.

Nothing changed in the opening minutes of the second half with Muric again called upon to keep things level and that seemed to prompt Vincent Kompany into early changes. In only the seventh minute of the half, we reverted to the team that had kicked off against Birmingham with both Rodriguez and Zaroury coming on.

Zaroury almost had an immediate impact with a ball in from the left that only just evaded Benson coming in at the right hand post, but the winning goal wasn’t far away. It might not have been a goal of the season contender but who cares?

Embed from Getty Images
We got the ball forward with Josh Brownhill playing it out to Benson on the right. He tried to play a low ball into the danger area that took a deflection off Fox. It was heading wide of the far post but with Zaroury lurking, defender Harry Clarke had to play the ball. He did so, straight at his goalkeeper Jack Bonham. It bounced off Bonham and Rodriguez was in quickly and knocked it back for Cullen to turn it home. It will hardly be in the reckoning for goal of the season but I’m not sure anyone in that away end actually cared, it had given us the lead.

I’m not so sure we ever looked as though we might double our advantage although Brownhill did blaze a free kick way over the heads of us in the away end in which, I was surprised to see so many empty seats given it was a sell out.

I wouldn’t say it was just a matter of not conceding the equaliser that Stoke pushed for. Yes, they got the ball forward and yes, they pushed men forward. Nathan Tella replaced Benson and they brought on three all at once, but I always felt we looked secure defensively. Charlie Taylor replaced Maatsen for the final few minutes as we made sure but I’m not sure Stoke ever had a shot at goal once we’d taken the lead and long before the end I’d thought the game was won although there was the usual relief when the final whistle went.

It’s a fifth successive league win and that’s a great response to the defeat at Sheffield United and in some ways the best of them. These are the wins that a team needs if they are going to succeed over a season, you don’t achieve anything without the scruffy 1-0s. It’s left us three points clear of the Blades but more significantly, we are now fourteen points clear of third place, a team who have incredibly lost twelve times. Not for one minute do I think we are promoted, but what a superb position we find ourselves in going into 2023.

Embed from Getty Images
Cullen, the fourteenth player to score for us this season, notched league goal number fifty. Have we ever scored so many in the first 25 games? And is fourteen goalscorers in one season a record?The answer to the first question is a resounding no. I don’t know how often we’ve bettered the half century but in my first two seasons of watching Burnley we’d scored an incredible 73 in 1960/61 and 71 in the following season. More recently, we’d scored 54 in the 1991/92 season.

Fourteen goalscorers is a lot but we only need to go back six years to the 2016/17 Premier League season when Robbie Brady, against Chelsea, became the final and fourteenth player to score a league goal that season. The last time we had more goalscorers was in 2010/11, another season following relegation from the Premier League. In that season we had no fewer than eighteen different league goalscorers although only Rodriguez (14) and Chris Eagles and Chris Iwelumo (both 11) scored more than three.

There is still a long, long way to go and it continues at Swansea in two days time. As tough as it was last night at times, the celebrations at the end, led by the jubilant Harwood-Bellis, were every bit as good as any other.

Nothing done yet, not by any means, but it’s looking good.