Bristol City at Gawthorpe for first under-18 game

The first team kicked off their season two weeks ago today, the under-21s started against Charlton last Monday and tomorrow the under-18s season is underway with a home game against Bristol City. 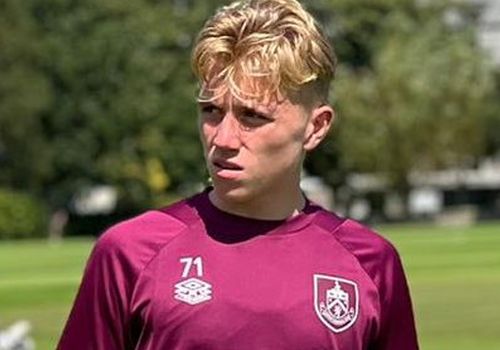 We are back in the U18 Professional Development League this season, due to our academy being downgraded, and we go into the new season having played seven pre-season games, a big change from a year ago when the players had hardly trained together, let alone played any games.

We were beaten at both Padiham and Barnoldswick before heading to St. Andrew’s in Scotland where we played Kilmarnock (2-2), and Queens Park (3-3) before beating Dundee United 2-1. A 2-1 win against Millersville University at Gawthorpe followed before the pre-season came to an end last Saturday at St. George’s Park where we drew 1-1 against Southampton with Joe Westley (pictured) scoring our goal.

This will be Bristol City’s third visit to Gawthorpe in this league. Our last encounter was in the 2019/20 season but that game, a 2-0 defeat, was played away from home. However, we beat them 6-0 at home in the final game of the 2017/18 season. Both Michael Fowler and Kian Yari scored twice that day with the other two goals netted by Ethan Kershaw and Jordan Cropper who has made his Football League debut this season for newly promoted Grimsby.

In 2018/19, it was a 1-0 with Chris (Cricky) Conn-Clarke scoring the only goal, a player who is currently at Fleetwood, where he too debuted in the Football League last season. He’s currently on loan at Altrincham and scored their goal last Saturday in a 1-1 home draw against Maidstone in the National League.

Burnley’s game against Bristol City kicks off at 11 a.m. tomorrow and is one of five games being played this weekend. They are shown below.