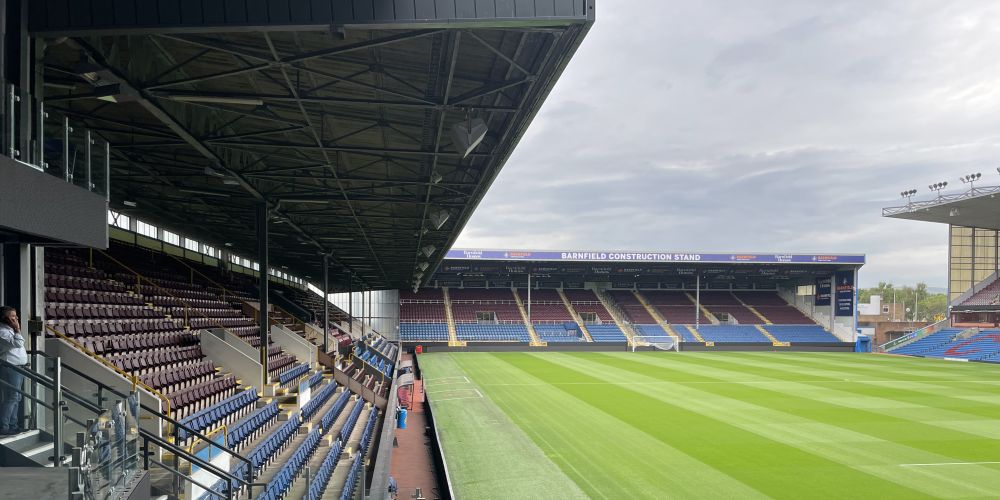 A sweet strike from Josh Brownhill five minutes into the second half drew Burnley level and earned us a point from our first home game of the season with a 1-1 draw against Luton Town.

On a day of eight home debuts, this was a much different Burnley team than the one that had ended last season against Newcastle with home supporters constantly asking who was who. Connor Roberts, Charlie Taylor, Jack Cork, Josh Brownhill and Ashley Barnes remained from the team beaten by Newcastle in the final game of last season who kicked off alongside five new signings and teenager Dara Costelloe who was making a home debut having played last week at Huddersfield.

It was good to get back to the Turf, it always is after a close season, although illness kept one of our group away. We all wished him well ahead of travelling and then forgot about him as we chatted ahead of the game.

The Huddersfield game eight days earlier had given everyone a lift and, for some, it seemed it might just be a matter of turning up for the Luton game to get the win. It was never going to be like that. They are a strong, physical side, as we saw yesterday, one that often employs the dark arts of the game. Add to that, our recent record in first home games of the season. Remember the 3-0 win against Southampton three years ago when Ashley Barnes scored twice? That’s the only time in the last ten years that we’ve won our first home game.

Embed from Getty Images
Over recent years, we’ve got used to Sean Dyche marching out like a sergeant major, making his way from the tunnel to the home dug out. He was always just about the last to appear but yesterday, in a very much stage managed arrival, new manager Vincent Kompany was first out, and received a superb reception from the Burnley supporters on all sides of the Turf.

By then, he’d named an unchanged side from the one that beat Huddersfield; the only change coming on the bench where new signing Manuel Benson, who is not from Barcelona, replaced Scott Twine.

Everything was set for a special day. Unfortunately, the script hadn’t been sent to the Luton dressing room and they were at it from the off. We looked at sea in the opening minutes and disaster struck when Luton won a throw in on the left wing. We never really dealt with the long throw, only half cleared it and it was soon back in our box with Amari’i Bell on the left. He chipped a ball up to the far post, they won a header, there was a scramble and the ball run loose to Dan Potts who smashed home with his left foot.

Turf Moor was silenced. It wasn’t supposed to be like this. We’d started poorly but to be behind with under five minutes gone was a big blow and one we struggled to deal with for some time. Had Luton been able to get a second goal, we would have been in serious trouble, but their ascendancy didn’t last too long and we nullified any potential goal threat.

Embed from Getty Images
The problem was then at the other end as we strived for a leveller. We had our moments but the passing game was nothing as like as crisp as it had been at Huddersfield. We didn’t come close to repeating that first half performance but we gradually got ourselves more into the game.

We had our moments but didn’t really create a clear chance to draw level. Our main threat seemed to be coming down the right where Connor Roberts and Dara Costelloe were linking up well whereas down the left it was mostly left for Ian Maatsen to plough a lone furrow.

That was clearly something Kompany had seen and he made a significant change at half time. Samuel Bastien, who had been disappointing, came off. Costelloe moved onto the left with new man Benson coming on for his debut.

The effect was immediate. Maatsen fired a left foot shot from distance over the bar and the Luton goalkeeper Ethan Horvath tipped a Benson cross for a corner. The new man had certainly lifted the crowd and he was soon involved again after Maatsen won another corner, this time from a low shot that did look to be going wide.

Embed from Getty Images
Maatsen and Benson linked up on a short corner which Benson, who had already given the Turf Moor crowd a big lift, played into the box. A Luton player made a bit of a mess of clearing it. I think it might have been Elijah Adebayo who had spent most of the afternoon mainly pulling at Burnley shirts. It fell for Ashley Barnes who knocked it back for Brownhill whose sweet shot from just outside the box was in the net, giving the goalkeeper no chance at all. It was Brownhill’s first goal at the Turf after netting three away from home at Millwall, Brighton and Watford.

The game had changed. One moment apart, I never thought we might concede a goal in the second half but unfortunately, we couldn’t find that winner. We had our moments, plenty of them. Both Benson and Barnes had chances, we put them under pressure with some testing balls into the box and as we moved into the last ten minutes, a flicked shot from Barnes hit the roof of the net.

Kompany made his second and last change with eight minutes remaining. It gave the home crowd a first look at Vitinho while also giving the home support the opportunity to recognise the performance of Costelloe. I think he’s done so well in these two games. The progress he made in the second half of last season under Michael Jackson and Andy Farrell has earned him this call up and he can be so pleased with the way he’s played.

Luton then made their final substitution. It was almost like a ‘Bullseye’ this is what you could have won movement with the appearance of Henri Lansbury who, seven years ago next week, was sat inside the Bob Lord Stand waiting to confirm his move to Burnley.

Embed from Getty Images
We pushed hard but the winner just wouldn’t come although the game did end in some controversy with an incident in the Luton technical area involving the hardly sedate Nathan Jones. I know it was deep into stoppage time, but if Jones did really prevent us from taking a quick throw in, as has been suggested, then it is remarkable that he was not ordered to the stand, even if it was for just a few seconds. From what’s been recorded, and I didn’t have the best of views, it cost Connor Roberts a yellow card.

All in all though, a disappointing result because we all wanted a win to add to that great result we got at Huddersfield. The first half we did look flat at times but we saw enough during the second half to leave us positive. The manager singled out Brownhill, and he did have an excellent game, and we’ve certainly got what looks like some outstanding attacking talent. The one concern, as it was last week, is the lack of goals so far. We’ve scored in both games but I’m sure we should have scored more in each of them. I’m sure that will be sorted soon.

Four points from the first two games is a decent start and now we’ve another Friday night out to look forward to, this one at Watford.