Burnley back on top after beating Barnet

We lost first place in the Fourth Division with a 3-0 defeat at Gillingham but it was the same scoreline in our favour when Barnet made their first visit to Burnley and that result took us back to the top of the league.

Poll Tax was very much back in the news with Burnley setting the 19923/93 figure at £262 and that included a £30 levy to make up for non-payers in 1991/92. A strong warning was issued to those thinking they could avoid payment in full and that they would be hounded until they did pay or face prison. 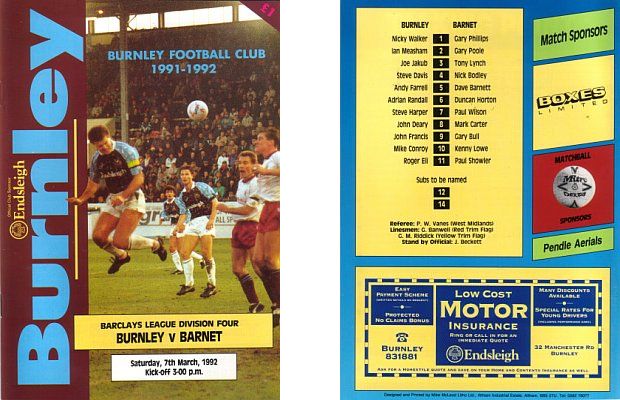 Councillors were branded as ‘scum’ and told to resign at a lively full council meeting. Police had to be called to remove some protestors from the public gallery. To the cries of scum, Councillor Ken McGeorge responded: “It is you who are costing the extra £30, you who won’t pay.” The new figure was agreed once the meeting was able to resume.

A day long meeting was set up to examine the problems of the trouble-hit Trafalgar Flats. There were hopes it could be involved in Burnley’s City Challenge bid and Mr Tom Forshaw, the City Challenge co-ordinator said: “We hope to be able to decide on one scheme which will be acceptable to everyone but that will then have to be approved by the council.”

One suggestion was to demolish some of the flats to make way for other housing. “It is an important step in the development of Trafalgar,” added Mr Forshaw.

In our last report four days ago came news of a mum and young son having to jump from the upstairs rooms of their home in Derwent Avenue to escape a house fire and that a 28-year-old was helping with inquiries. It was later confirmed that Kenneth Drury, aged 18 and not 28, had appeared before Burnley magistrates accused of starting the fire. He was remanded in custody, awaiting committal at Crown Court.

There was some sad news of another 18-year-old, this time Colin Holmes of Cog Lane. He was found dead in his flat after taking a mixture of methadone, heroin, cannabis, sleeping tablets and alcohol. His friend said he’d fallen asleep so he put a quilt over him but Colin was found dead on the following afternoon. It had all started after he struggled to find a sponsor for his work training as a bricklayer. Coroner Me David Smith said: “This is an horrendous story. He obviously changed his lifestyle after his work training did not work out as it could have done for him.” He recorded a verdict of misadventure.

One Nottingham lady called Margaret Rowley wrote to the Burnley Express five years after a visit to Majorca where she met Burnley couple and fish and chip shop owners Andy and Doreen who told her that their chippy was haunted by Pendle Witch Alice Nutter. They must have been good fish and chips if Margaret was so keen to get in touch after five years. Apparently, she’d received a Christmas card from them and thought this was the best way to get back in touch.

If you are going to go on the rob then I suspect it’s something you shouldn’t do too close to home, although I don’t speak from any experience. Andrew Howarth stole cheque books and bank cards and a car. Unfortunately, the books and cards belonged to his dad and the car to his mum, so he did what he thought was the sensible thing and went on the run. When he returned, his parents did the decent thing and gave him the prodigal son treatment. The courts didn’t though although he was remanded on bail awaiting preparation of social enquiry reports for theft, driving without insurance and without due care and attention. Bail conditions were that he lived with his mum and dad who I assume had tightened security.

This is a story I hope we wouldn’t hear of today. A Burnley man, aged 66, said he only received £2 per week spending money so he took the opportunity to steal and old lady’s handbag while she shopped in KwikSave. The handbag contained £500 in bank notes and she’d left it in her trolly while she shopped. The good news here is that everything was recovered and the man received nothing other than a conditional discharged. Having so much money on her wasn’t something my mum would have done but I did have a particular auntie in mind when seeing this. Unfortunately, older women, and some younger, did have a habit of carrying a lot of cash.

On the subject of money, ahead of the game against Barnet, Burnley were appealing to supporters to dip into their pockets to help bottom of the league Aldershot who, it was being reported, had some financial problems. Burnley were to hold a bucket collection before the game and our club secretary Mark Blackbourne explained: “I feel we have a moral obligation to help our fellow clubs and we should show support wherever we can. I hope that fans will show their support by digging deep into their pockets to show that they have consideration and concern for a club less fortunate than the one they support.” Burnley confirmed there would be collection points at every turnstile and then a further collection at half time with the money to be used to pay player wages at Aldershot.

Jimmy Mullen was able to welcome back John Pender after he’d served a suspension. It was the only change to the team with Adrian Randall dropping out, allowing Andy Farrell to return to his more accustomed place in midfield.

A first ever game against Barnet, this was a founder member against one of the new boys but the new boys arrived knowing a win would take them within four points of us. They were looking to emulate Darlington who had won the Conference and then gone straight up again into the Third Division.

By the end, they went home shell shocked and ten points behind us with Burnley showing that the defeat at Gillingham in midweek was well and truly behind them.

We were close to scoring within the first thirty seconds only for Roger Eli to fire wide from a Steve Harper cross. Nicky Walker did have a save to make soon after but on ten minutes we went in front. We won a second corner on the right which was taken by Joe Jakub. It was met by Steve DAVIS who scored with a thunderous header.

It was end to end for a while but we always looked, by far, the most threatening. We should have had a penalty when Davis was elbowed in the face, only for referee Paul Vanes to wave it away but we finally took things away from Barnet early in the second half.

Ian Measham, in terrific form on the right, got down the wing and crossed low having played a one-two with John Francis. Dave BARNETT had only signed for Barnet that week from Telford but he could do no more than turn it into his own net. It really was all over ten minutes later when substitute Randall played in John Deary. One-on-one with goalkeeper Gary Phillips, there was only one winner with DEARY sliding the ball home.

How many more could we have scored? We missed a couple of good chances and were also denied by Phillips but, when the final whistle blew on this 3-0 win, the crowd went home knowing they had just seen us thoroughly dominate a game that had been billed as the division’s match of the day.

Blackpool, one of two teams who started the day a point ahead of us in the league, were without a game but the big news came from Lincoln who beat Mansfield 2-0 to allow us to go back to the top of the league, just four days after losing top billing.