Burnley blunted by the Blades 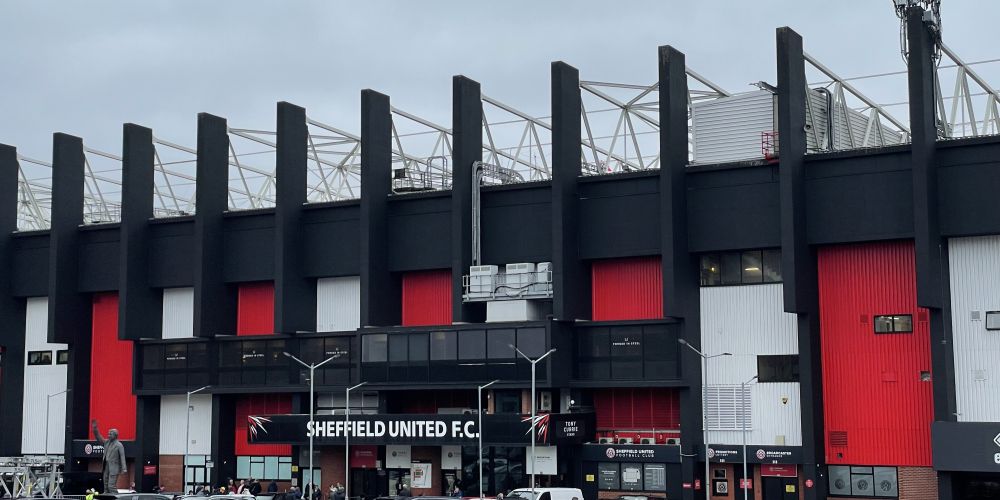 Burnley suffered their biggest Championship defeat yesterday at Sheffield United Boxing Day 2015. It was a 3-0 loss at Hull back then; yesterday at Bramall Lane we were beaten 5-2 on a day when we twice led through Manuel Benson goals.

We led 2-1 at half time but what we all hoped was going to be another fantastic away day was blown away in the second half, particularly in a ten minute spell that saw us concede three of those five goals. It left us playing out the remaining twenty minutes or so with the game way beyond us and a more subdued away section of fans in the lower tier at the Bramall Lane end.

With the early kick off, we’d decided on an early start from Burnley with a breakfast booked in Sheffield before making our way to the ground. It was an even earlier start to the day for myself with my first radio appearance of the season at the unearthly hour of 6:30 a.m.

At this point, in away match reports, I often refer to problems on the road, occasionally able to report on a trouble free journey. Yesterday, we were so close to being the victims of the delays that ensued on the A57, not too far beyond the end of the M67. Without going into too much detail, we were so close to being hit by some idiotic woman who thought it acceptable to set off without indicating and try to U-turn across four lanes of traffic. We were fortunate, the man in the next lane was not quite so fortunate. Neither of the cars are ever likely to be roadworthy again but I was relieved to learn this afternoon that miraculously there were no serious injuries. I hope I was able to alert some fans to the issues and enable them to choose a different route. I’m also grateful to fellow Claret Ian who, on spotting me in the road, stopped to check I was OK.

The rest of the journey was, thankfully, without incident and after an enjoyable breakfast, it was off to the ground where I saw my first ever away win back in 1962 in the sixth round of the FA Cup. I have to say it’s not been the best of places for us since with just two wins and this game was on the same first weekend in November as was the case last time we were able to attend this fixture in 2019 when we were soundly beaten 3-0.

At the previous away game at Sunderland, we had chaos outside due to the lack of turnstiles. Here, the problems were inside. With many Burnley fans opting not to go to their allocated seats, we had jammed gangways throughout and a stewarding team unwilling to do anything about it. Had anyone needed emergency assistance during the game, it would have been virtually impossible to get that help to the person in need.

We made three changes to the team that finally won against Rotherham. We knew Josh Brownhill was out suspended while Jay Rodriguez was ruled out with injury and Jóhann Berg Guðmundsson was on the bench. In came fit again Josh Cullen, Samuel Bastien and Wednesday’s match winner Manuel Benson.

I felt we started the game quite well but there were warnings for us that Sheffield United were a threat from set pieces, be they free kicks, corners or the long throws. They did put a header wide from one corner while a throw right into our box caused some pandemonium. However, down at the far end, we were causing them some problems too. We were seeing a lot of the ball in attacking positions and it was no surprise when we went in front.

Sheffield United cleared a Burnley corner from the right but it found Ian Maatsen. They headed out his cross but only to Benson whose shot was headed into his own net by Jack Robinson. Although Benson’s shot would probably have been saved comfortably, it was on target so, rightly, he was awarded the goal.

This is the time that we really should have gone on and won this game. We scorned opportunities to double our advantage. Anass Zaroury had a chance but probably the best of them came to Taylor Harwood-Bellis who headed wide.

We paid for it too on the half hour when Sheffield United equalised and it was no surprise it came from a set piece, albeit one that shouldn’t have been given. The ball clearly went out for a goal kick but the assistant on that side, who got so many decisions wrong during the afternoon, gave the corner and Iliman Ndiaye got the final touch to turn the ball home. Had it been Rotherham, I can’t imagine how much whinging we’d have had from their manager Matt Taylor.

We weren’t done and got ourselves in front again in the final scheduled minute of the half when Robinson was again the guilty party, conceding possession to Benson who this time finished expertly with a left footed shot across the goalkeeper from the right.

In front at half time, we had every right to be confident of getting a fifth away win of the season. I’m not going to go through anything from that second half in any detail but their second equaliser early in the half switched the momentum their way. It was the first of two goals Oli McBurnie would score.

We remained level until four minutes past the hour; ten minutes later we were 5-2 behind and during this awful few minutes, Arijanet Muric kept out at least two other goal bound efforts. It was simply horrendous. I didn’t think we’d any full backs on the pitch and once the balls came into our box we didn’t appear to have much clue as to how to deal with them.

I have seen the goals since, it wasn’t a pretty watch, but the last one is offside, clearly so, but it didn’t really matter by then although the aforementioned Rotherham manager would probably have written a book on the injustice of it all.

We fully deserved to be 5-2 down and had we not made some changes who knows what the final score might have been. With the horses bolted, we did eventually shut the stable door with the introduction of Connor Roberts and Charlie Taylor in the full back positions but the damage had well and truly been done. The one saving grace is that we got to the end without any more goals going in against us.

It wasn’t good, it was far worse than I could have imagined, but let’s not get too concerned. Yes, it was the first time we’d conceded five goals in a Football League match since the final day of the 2007/08 season when play-off chasing Crystal Palace beat us 5-0 after Clarke Carlisle had been sent off.

But it is only our second defeat this season. We are still top of the league and the team that’s just beaten us is, in my view, the best team we’ve played so far this season. They knew how to deal with us and did it well and took advantage of us missing our best defender at set pieces, Rodriguez.

Thankfully, the journey home was trouble free. The A57 had been reopened and we’ve a few weeks now to plan our next away trip to QPR. There’s just the matter of a League Cup tie and a local derby at home this week.