Burnley crash out of cup at Leeds

Burnley had gone to the top of the Second Division on the first Saturday in September in 1972, but four days later came crashing back down to earth with a heavy 4-0 defeat against Leeds United at Elland Road in the League Cup. 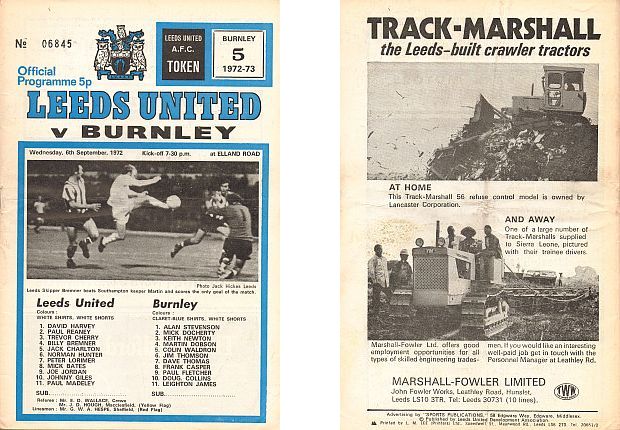 Just for a short time it looked as though the Lucas strike might be over when shop stewards recommended a return to work after six weeks of action. The vote went 605-600 in favour of a return but the stoppage continued. Those voting against were still unhappy at management’s unwillingness to discuss talks on parity between the wages of workers in Birmingham and Burnley, this despite the company finally accepting it was a problem. Chief negotiating shop steward, Michael Cooney, said: “This would take at least four months to sort out. It’s a very complicated issue, but the important thing is that we have got them to recognise the parity issue.”

There was a storm brewing in the Cocos (Keeling) Isles, but why would that bother anyone in Burnley you might ask. The answer to that question is that John Clunies-Ross, who was King Ross V, was married to Daphne Parkinson of Burnley.

Queen Daphne’s husband was accused of keeping the natives prisoner and treating them like slaves on royal plantations. Some years earlier she’d brought in a law restricting subjects to a maximum of two children per family despite her having five children herself. It looked as though they were in a spot of trouble but the Queen Mum, Gwendolyn Parkinson of Burnley, said: “We have nothing to say,” whilst brother Stephen, who lived on Manchester Road and didn’t carry a title, confirmed that his sister had not fled to Britain. “It’s a very delicate situation and it’s best  not to get involved in any publicity,” added the Queen Mum, but that changed when the Australian Federal Minister flew in to find that workers were paid in plastic tokens which could only be spent at the Queen’s store and that children were refused an acceptable education to prevent them wanting to leave the islands. A few years later the King and Queen moved to Perth in Western Australia having lost control of the islands to the Aussies.

Locally that week, entertainment wise, Bernard Manning was back in Burnley, sharing top billing at the Cabaret Club with West Indian contortionist Angela Gulley and at the cinema people were flocking to see ‘The Good, the Bad and the Ugly’.

I hadn’t realised it was so long ago, but the shirts with matching ties were proving popular. Whoever came up with that idea I don’t know, but they were available in town from £1.49.

In the world of sport, the Burnley Express confirmed that the Burnley Express Sportsman of the Year Award would be presented before Burnley’s home game against Middlesbrough at Turf Moor. The award would be presented by football club chairman Bob Lord with the winner decided by a panel of Derek Riley (former Burnley CC captain), Peter Higgs (Express Sports Editor) and Don Smith (Burnley Express). There were four leading contenders. The first was Burnley Belvedere football captain Harry Howarth who had become only the second player from Burnley ever to play for the Lancashire Amateur XI. Harry also played cricket for Burnley. Darter Geoff Knowles had won the Club & Institute Final, John Calvert had taken second place in the Rossendale Half Marathon behind Olympic runner Ron Hill and teenager Duncan Richardson was the outstanding swimmer in the area.

But Burnley Football Club had been given the toughest of ties in the League Cup, a trip to Elland Road to face Leeds, one of the best teams in the country at the time. On the day before the game, manager Jimmy Adamson revealed that both Keith Newton and captain Martin Dobson were doubts with Geoff Nulty and Billy Ingham placed on standby should either or both fail fitness tests. He said: “Any team going to Leeds knows it is in for a tough time. Everyone is expecting us to get licked, but if we are in a good mood we could give them a shock. The pressure will be on them and this could be our chance.” It didn’t quite work out like that for Burnley and Adamson unfortunately. As Peter Higgs wrote in the Burnley Express: “Burnley were expected to get a thrashing against Leeds, and in the finish that’s just what they got.”

It wasn’t the whole story though for a Burnley team that was able to include both Newton and Dobson after they were passed fit. In the first half Burnley matched Leeds, we were very unfortunate not to get a goal and had the breaks and good fortune gone our way we might just have come home with a result. But, once in front, this Leeds team showed no mercy and highlighted just why they were considered one of the country’s top teams.

During the first half, Dave Thomas, Dobson and Doug Collins were finding space in midfield, Paul Fletcher was causing Jack Charlton no end of problems and Colin Waldron was marshalling the defence expertly. We started in some fine style and won two early corners which came to nothing. Then Frank Casper went on a run after robbing Paul Reaney, only for goalkeeper David Harvey to make a save.

Thomas was just too high with a shot and Fletcher headed wide as the game was end to end during an exciting first half and all credit to Burnley who went in level at half time with the score at 0-0. The only bad news was that Dobson needed treatment just before the break after a very bad challenge from Trevor Cherry – Leeds? A bad challenge?

A second half like the first and a Turf Moor replay was the suggestion during the interval but that all went very wrong early in the second half. With less than two minutes of the half gone we found ourselves behind and ten minutes later the tie had been well and truly decided as Leeds scored their third.

Waldron headed a ball down but only as far as Leeds’ sub Mick Jones. Alan Stevenson was able to push away his mis-hit shot. Eddie Gray got to it and his shot was blocked. It flew into the air where Peter LORIMER got  above Waldron to head home.

Five minutes later and Lorimer was the architect as he got down the left wing. His cross was met by Gray who headed against the post. As Burnley froze, JONES was first to the ball to score. Just five more minutes and it was 3-0. Again Lorimer crossed. Stevenson punched it but only as far as CHERRY who half volleyed the ball home.

Lorimer had scored the first and the next two had come from his crosses, and that name LORIMER was the scorer of the fourth and last goal with quarter of an hour to go when he unleashed an unstoppable drive that left Stevenson helpless. Burnley were being run ragged and there could have been more goals. Gray and Charlton should both have scored, but somehow we kept it down to 4-0. It was a heavy defeat, but for 45 minutes we’d matched them.

The manager was honest enough after the game. “They showed us how to control a game when you are in front,” he admitted. “It might have been different if we had scored in the first half and they had to force the game, but once they got the first goal there was only one team in it. I thought we were the better team in the first half and our performance during this period was a great credit to us. If Frank Casper had scored from that chance early on it might have made a difference. There’s no one you would want more in that situation than Frank, because he usually puts those chances away so well. Once they got on top, we stopped playing as a team. There was not the usual running and this made it even harder for us.”

So, the League Cup campaign had ended at the first hurdle. Leeds went on to beat Aston Villa in the next round before going out to Liverpool.