Burnley draw another blank against Oldham

Having drawn the first two home games of the season 0-0 against Gillingham and Bristol Rovers, Burnley secured another 0-0 home draw against Oldham Athletic on this day in 1997.

Local news had all but taken a back seat with the dreadful news that had come through just a couple of days earlier of the death of Princess Diana in Paris. That one story dominated the Tuesday edition of the Burnley Express, as you would expect, but there was still some other local news. 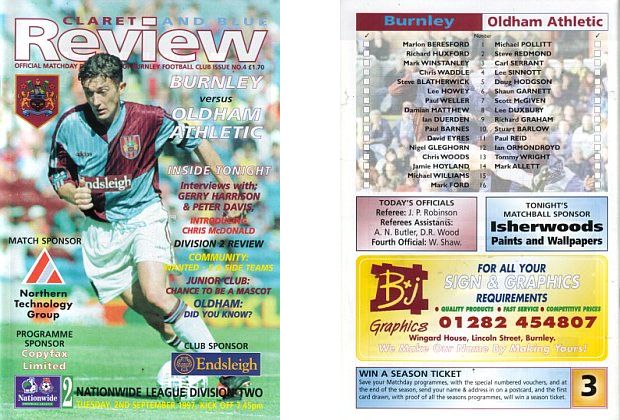 An unnamed couple from Burnley had been providing homes for mentally ill people but through bad advice from Lancashire County Council they had lost more than £45,000. Apparently, the council advised that funding could only be provided if the accommodation had been registered as a care home. Ombudsman, Mrs Patricia Thomas, confirmed: “This advice was, as the council has now acknowledged, incorrect and led to a lengthy delay. I consider the giving of inaccurate advice and the consequent delay to be maladministration.”

She added: “I consider that the council had a duty to both the clients and the complainants to give good advice and to make proper financial provision.” She asked the council to pay the couple what they were owed plus a further £500.

Burnley man Mr David Walsh wanted no more than to see his daughter Clarissa. He and her mum, Elizabeth Littlejohn, had separated and he’d had limited access. That was until mum scarpered to Tasmania five years previously just after Clarissa’s second birthday. They had now been seen back in Burnley and Mr Walsh was told. “All I want to do is see my daughter,” he said. “She was taken away from me two days before her second birthday. I’ve missed out on five years of her life.”

He added: “I’m really appealing to anyone who knows Elizabeth and Clarissa and has seen them while they’ve been in Burnley. I just want to see her and have access to her, she’s my daughter as well.”

The deaths of grandma Emma Nelson and her two grandchildren Michael Wright (13) and Rebecca Marshall (15), that we reported last week, was just a terrible tragedy confirmed Detective Superintendent Tony Hilton. He confirmed that the boiler was operating correctly and that it had also been installed correctly and that the fatal levels of carbon monoxide was due to the appliance firing up overnight.

One Burnley man subjected his girlfriend to abusive name calling. Now, he might well have got away with that but he then went and punched her in the face. It was all because they’d missed a taxi home because she wanted to visit the toilet before leaving the Shalama restaurant. Anthony Bithell appeared before magistrates and his defending solicitor, former Burnley FC director Mr Basil Dearing, told the court: “He went beyond the bounds of what is reasonable,” and then explained that the couple had been reconciled with his girlfriend withdrawing her complaint.

If I ever refence the two local cricket teams, I’m often accused of showing some bias. At the end of the day, I was taken to Lancashire League cricket by my dad back in the early 1960s and our local club was Burnley, so it is always Burnley I would want to see win.

However, it’s only fair to report when Lowerhouse have a better week. They were at home to Church on the previous Saturday, and despite being bowled out for 100, they won by 29 runs having seen Church off for 71. Stan Heaton top scored for the home side with 23 while Matt Hope took 4 for 18 in Church’s reply. Burnley too batted first at Haslingden and scored 128 with Simon Edmondson scoring 29. Haslingden knocked them off with ease with just six wickets down; spinner David Connolly took 3 for 43 for Burnley. A special mention too for the Haslingden professional Hamish Anthony who took eight of the Burnley wickets for just 35.

Over to the football and Chris Waddle had moved to strengthen his squad with the loan signing of Andy Kiwomya from Bradford City. Waddle said of his new signing: “I played with Andy for five months last season. He has electric pace and can be a match winner on his day. It proved to be difficult bringing someone in, but Chris Kamara was very helpful and let Andy come for a month. If he does a job for us, we could make it a permanent move.”

Kiwomya went straight into the team for what was yet another 0-0 home draw, but this was much better as we turned in our best performance of the season. In the previous game against Bristol Rovers we’d looked devoid of ideas and hadn’t had a single shot on target. This time, we had seven shots on target, and we looked as though we might get off the mark goals wise.

We were nearly in front within four minutes. It all started with Waddle who tormented Oldham defender Mark Innis on the right before slipping the ball to Paul Weller. From there, Weller crossed for Lee Howey to head goalwards, denied only by a brilliant save from Mike Pollitt.

Doug Hodgson, who had played one game for Burnley in the previous season, went close for Oldham with Chris Brass clearing off the line and then Kiwomya came even closer only to see his header cleared off the line at the expense of a corner.

Oldham started to get to grips with things and, as expected for a Neil Warnock side, were proving difficult to break down but as half time arrived, we were unfortunate not to be in front. It was Oldham who started the brighter in the second half. They forced Marlon Beresford into one big save and almost troubled the yet again superb Steve Blatherwick.

Burnley defended brilliantly during this period and then got back at Oldham. Hodgson was extremely fortunate not to receive a red card for one bad challenge on Howey. Warnock knew it and took him straight off.

There was some late goalmouth action too at either end. Sean McCarthy had the ball in our net but was pulled up for a clear handball and then Paul Barnes, on as a substitute for Waddle, fired a shot across the goalkeeper only to see it hit the post. If that was unlucky, Kiwomya got onto the rebound and hit his shot across the post too.

So, another 0-0, but a much better 0-0 and despite the result, Waddle was happier. “The lads gave total commitment and I couldn’t ask for any more,” he said, adding: “We didn’t get the breaks, hitting the post twice in five seconds, but the goals will come.

“We know we were poor against Bristol Rovers, and the fans had fair criticism, but they clapped us off tonight after the same result.

“We will get the goal. We created enough and looked like scoring. Everyone stood up and was counted. The final ball at times was good, and overall we matched a strong, physical side. We will keep going and I am sure it will come good.”

Watford were back on top of the league having won 1-0 at Plymouth, displacing Bournemouth who could only draw at home against Bristol Rovers. At the other end of the table, we were thankful for Preston beating Grimsby with the Mariners keeping us off the bottom with a worse goal difference than us.

No goals this time for Kurt Nogan in Preston’s win but former loan player David Reeves did score their first goal and for leaders Watford, Gifton Noel-Williams scored their goal. They weren’t the only players with Burnley connections to find the net. Wrexham led 3-0 against Blackpool just a few minutes into the second half but a hat trick in fourteen minutes for Tony Ellis levelled things before Blackpool won it with a Mark Bonner goal. Former loan player Junior Bent was also in the Blackpool team as was 17-year-old Clarke Carlisle who was making his first team debut.