Burnley’s pre-season trip to Northern Ireland in 1997 kicked off with a draw against Crusaders but it was a different looking Burnley who played the game, providing a surprise for the Burnley fans who had made the trip. 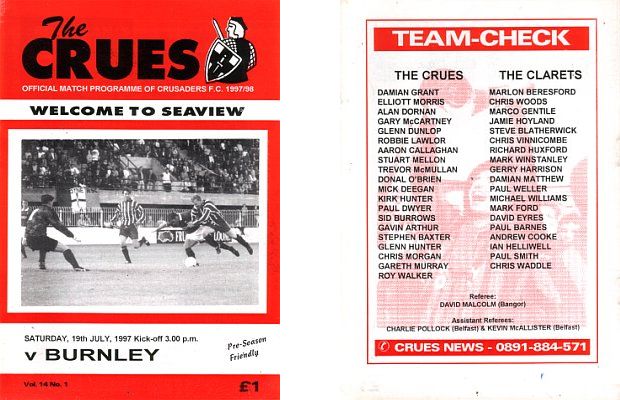 What was described as a major error by the airline handling staff meant that we had no kit for the game and our hosts kindly loaned us their home kit of red and black stripes.

New manager Chris Waddle gave debuts to Steve Blatherwick, Mark Ford and Michael Williams and played a 5-3-2 formation. There was no sign of the manager on the pitch, however, and he explained: “I’ve had a bang on my foot which is giving me plenty of pain. I’m trying to get it sorted out, but it looks as though I’ll be missing the rest of the tour.”

While this was the first of four games for us in Northern Ireland, it was a key game for Crusaders who would next be in action against Dinamo Tbilisi in a Champions League qualifier.

In a lively opening half, neither side was able to break the deadlock although there were chances at both ends. Burnley, playing a first game of pre-season, were trying to ease themselves in gently against a Crusaders side who were showing that they had that big game coming up. None of the chances were taken and It left the two teams going in for the break at 0-0, but that was to change in the second half.

With just ten minutes gone, Andy Cooke was brought down in the box for a clear penalty. Paul BARNES stepped up to slam home the penalty.

It didn’t lead to Burnley taking the game away from the hosts, anything but. They were level within five minutes. We failed to deal with a high ball into our box. It dropped for Steve BAXTER, Northern Ireland’s player of the year in 1996/97, and he hit a fierce low shot home from around ten yards.

They were lifted by the equaliser and went on to play their best football of the game and it culminated in them going in front twelve minutes from time. It came from a left wing corner to the far post. It was headed back across goal for Chris MORGAN to finish with a downward header.

It looked as though the game was going to end with a defeat but in stoppage time we won a free kick to the right of goal, some twenty yards out. David EYRES made no mistake with a powerful shot into the top corner of the net.

Waddle said after the game: “We did very well for seventy minutes, but we tired a little bit in the final quarter. That was understandable in the circumstances, because it was very warm and it was our first major run-out. It will be a week of assessing the strengths and weaknesses of the squad and I believe a vital guide for the new season. There were some very positive points to come out of the match and I learned one or two things.”

The one downside was picking up two yellow cards. Both Richard Huxford and Eyres fell victim and these cards counted towards any received in the league. Waddle said: “I’ve just started in management so I’m not going to start having a go at referees. We just have to accept the bookings.”

The one name on the lips of Burnley supporters was that of Ford. He impressed throughout and the view was that we’d done incredibly well to get him, particularly for the fee we paid. Those Burnley fans there for the four games were looking forward to seeing the new midfielder in action again.