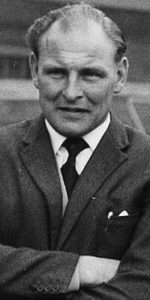 The draw for the sixth round of the FA Cup saw Burnley paired with local rivals Blackburn Rovers for a second season in succession in 1959/60, that is if we could beat Bradford City in the replay.

As always, the draw was made at lunchtime at The Football Association at Lancaster Gate, with BBC Radio permitted to broadcast the draw live. Already through were five First Division teams in Blackburn Rovers, Leicester City, Preston North End, Sheffield Wednesday and Wolverhampton Wanderers.

Joining them were Aston Villa and Sheffield United, both from the Second Division with the one remaining place going to either Third Division Bradford City or Burnley, dependent on the result of the following night’s replay.

We’d won 2-1 against Blackburn in the Fourth Round a year earlier in what was only our third ever pairing in the competition and now there was a very good chance that we would be playing them in successive seasons.

The draw, in the hushed council chamber started after the balls had been shaken in the blue velvet bag.

Number 7 was the first number drawn. “Bradford City or Burnley,” was called. Number 5 was the next number and we heard: “Will play Blackburn Rovers”. Now there was an incentive to beat Bradford City, a home tie against Rovers, just a week after they were due to visit us in the league.

The full sixth round draw