Burnley fans want both Franks Out

Burnley fans were calling for the heads of chairman Frank Teasdale and manager Frank Casper as the Clarets fell to an embarrasing 3-1 defeat at Scaraborough, a third successive defeat, us having lost the two previous games at Hereford and at home against Rochdale.

The town was inundated with marches during the weekend, and for somewhat different reasons. The anti-poll tax marchers made their point as Burnley continued to lead the country in jailing non-payers. Meanwhile there was a ‘March for Jesus’ led by former Claret Eddie Cliff and his wife Mary. Eddie had been the left back for the Clarets when we won the FA Youth Cup in 1968. 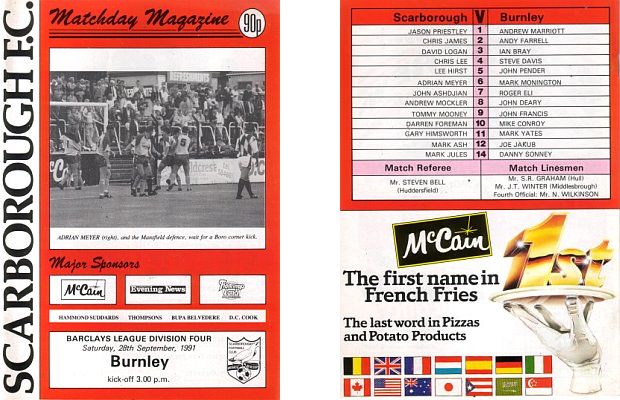 There was more on the poll tax situation as a High Court Judge intervened and allowed a Burnley man to walk free half way through his sentence. Over 19,000 Burnley folk were still in arrears. That left a massive queue at the courts, but it didn’t keep two people out who had been charged with theft with one of them facing jail alongside the poll tax evaders and the other getting community service.

It was a 40-year-old woman who went to jail. She’d stolen a tin of coffee, four bottles of whisky and £26 worth of underwear, all to feed her drug habit. When the court heard there were two similar offences to be taken into consideration she was sentenced to 15 months imprisonment.

One man was seen taking more than he’d paid for at Sainsbury’s when he was spotted loading the trolley into the back of his van. I think he might have been best advised to leave it in the car park because when security men went to reclaim it they found over £80 worth of other goods that he’d taken. He received 100 hours community service.

A Burnley man made a serious mistake when he planned to move to Australia. He’d been once before but was deported in 1986 after his 12 month working visa expired. He spent ten days in a Brisbane prison cell before being put on a plane back to England. He’d no chance of getting a visa in his own name so devised an ingenious plan to apply for a passport, and then a visa, in his brother’s name. He might have got away with it too had his brother not died in 1980. Rather than getting a passport and visa he instead was granted a £150 fine with £20 costs.

There was good news, and even better news, for St. Peter’s Church as it recovered from the fire. They learned that all the repair damage would be covered by insurance although there was still a £70,000 shortfall in the money required for the restoration work that was in progress. The further good news came when spinster Clara ‘Beth’ Binney passed away and left all her worldly goods to a dear friend, a London doctor, including all her money, house, car and everything else. You would have thought the doctor might have been a bit grateful but when informed she said of Clara’s bequest: “I don’t want it. What possessed her to do that?” She then suggested it should go to charity and so the parish church benefited. I just wish I’d known Clara.

It was a big well done to one young Burnley cricketer, 11-years-old Michael Brown, who scored 149 not out at the English Schools Cricket Festival. It was the highest score ever at the festival and he became the youngest ever winner of a Young Cricket Award from the Cricketer magazine and Slazenger. He won for himself a Slazenger V500 bat and a ‘Test’ ball. It was thought Michael could have a very bright future in the game with many tipping him to go and play first class cricket.

One poor Burnley man was loathe to complain about the goings on at Turf Moor but in the end felt the need to via the letters page in the Burnley Express. It wasn’t so much the football but the pre-match and half time noise that was upsetting Mr E Brown, aged 71. He admitted that he’d gone through life not complaining about things but now was the time to change the habit of a lifetime. Mr Brown said: “I realise now why Mr Teasdale and his board vacate their seats as soon as the referee’s whistle is blown, it’s because they’re having none of the ear-blasting rubbish that we are subjected to. I had the belief that a public address system should be mainly turned up in volume for announcements and, at other times, allow people to talk without shouting, but that seems to be another illusion. Perhaps nobody told the invisible disk jockey that. Jimmy Young, DLT and Gloria Hunniford have nothing to fear for their livelihood from that quarter. Next season it won’t be Fourth Division football that keeps my mates and I away, it’ll be the torturous music.”

Mr Brown added: “I wish I could buy the sort of cheese they use in ‘Allo, ‘Allo,” referring to the actions of the German officers when Madam Edith started singing in René’s café.

Mr Brown might have been considering himself very fortunate by tea time having not travelled to Scarborough as those Burnley fans who did witness the game came back with tales of woe and demands for both chairman and manager to leave the club with immediate effect. Burnley went into the game without Mike Conroy and Steve Harper (both injured) and John Francis (suspended) but did have Ian Measham returning from injury at right-back. The injuries to the forwards provided Graham Lancashire with a big opportunity, his first start in the first team.

We’d won at Scarborough just over six months previously, winning 1-0 with an early Francis goal, but there was to be no repeat here as we turned in the worst performance of the season and the fans were not happy. Edward Lee, in the Burnley Express, wrote: “Even a calm-as-anything goal from teenager Graham Lancashire did little to silence the mass travelling army of supporters who had it in for both Mr Casper and Mr Teasdale from the word go.”

We knew what to expect at Scarborough, a team who were struggling near the bottom of the league with only one win all season. It was going to be physical and confrontational from the off and that’s how it turned out with Adrian Meyer getting a yellow card in the very first minute for a cynical body check on Lancashire.

Nothing much happened in the first quarter of an hour, other than them trying to rough us up, but then the game changed with three goals in four minutes. It all started when Dave Logan’s free kick was flicked on in the box for MEYER, even then fortunate to be on the pitch, to force over the line. However, the lead didn’t last long, as the Clarets drew level within a minute. Scarborough were playing an offside game and got it terribly wrong. Lancashire, Roger Eli and Peter Mumby all broke clear and all three were onside. It was LANCASHIRE who took it on and scored from the edge of the box.

Surely now was the time for Burnley to stamp their better football on the match, but sadly on 20 minutes we were behind again when Mark Jules got down the left wing and his cross was met by Tommy MOONEY who made no mistake. That was it for action in the first half, other than the treatment given to Lancashire who was forced off at half time.

Just seven minutes into the second half and Burnley got their big chance when referee Bell finally decided to take some action. Roger Eli got past Mark Ash who pulled him back. Somehow Eli got free only for Ash to hack him down. This time the referee got it right. The red card came out and Scarborough were down to ten men. There was still almost half the game remaining but Burnley did not mount one serious challenge on the Scarborough goal and just past the hour an Andy Marriott error allowed a John ASHDJIAN shot to go through him and in for their third.

Casper was tight lipped at the end after this very poor performance. It had seen us drop to 11th in the table and the run had now become three successive defeats following the home draw against Crewe. The team looked to be heading nowhere and the hopes of a promotion from the bottom division looked as far away as ever.

We’d got our best ever squad in the seven years in this division, and there were key players missing, but this was an abject performance and the fans made it clear they had just about had enough.

The teams at Scarborough were;

Results elsewhere saw two of the top three, Blackpool and Barnet, forge ahead with wins whilst the third, Rochdale, had to settle for a draw at home to bottom club Doncaster Rovers. With Scarborough beating Burnley and Maidstone recording a victory over York City it meant the bottom three teams all picked up points.

Wrexham’s 4-0 win over Scunthorpe was the biggest win of the weekend, a game that saw Steve Watkin score twice. It lifted the Welsh club six places to 13th, the biggest climb of the week.

Carlisle, held to a draw by Walsall, were now next to bottom and they were Burnley’s next opponents. We really needed to get our season moving again and a home win was imperative against the Cumbrians.