Burnley followed up their home 1-1 draw with QPR with another 1-1 draw, this time at Hull’s Boothferry Park and in doing so dropped to third in the Second Division table. 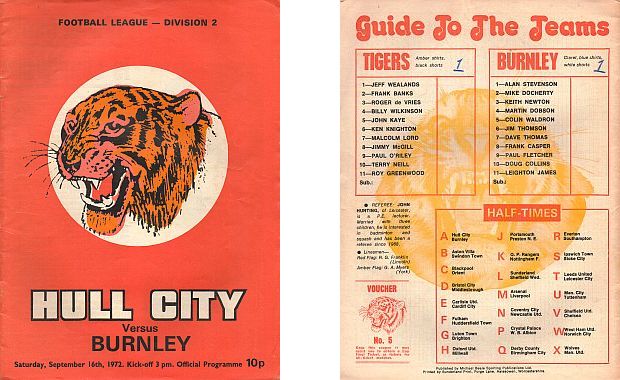 After a long dispute, Lucas were finally able to announce that their doors were open again. The strike was over and many of the workers were back in work. A spokesman said on the Monday: “We had several people in over the weekend to get the factories ready for production and this morning we found fifty percent of the workers on the RB211 engine project reporting for work.” The mass meeting on the previous Friday, which had resulted in the vote to return to work, had been held on Hargher Clough Recreation Ground with 1,700 men in attendance. I couldn’t quite work out why only half had then decided to return to work but the reason was that the other half were on holiday with the return to work coming in Burnley’s September holiday week.

Still, it was good news but no so for those involved with St. Leonard’s Church in Padiham where there was over £8,000 worth of damage after a fire. Part of the roof had been severely damaged and the church organ had been completely destroyed. It was thought that the church would be out of action for some months but the awful news came when it was confirmed that the fire had been started deliberately and three young children were being interviewed by the police.

I’ve been intrigued ever since I saw the letter in the Burnley Express complaining that the Studio Cinema in the market square was showing nothing but sex films. The poor man who sent in the letter said he’d been to see them but didn’t enjoy them. In subsequent weeks I’d checked and seen films such as ‘On The Buses’ and ‘Seven Brides for Seven Brothers’ and wondered what all the fuss was about. Then came the news of this week. As a kid I used to go to the Odeon on a Saturday morning. I was a member of the Odeon Club and greeted everybody with a smile.

However, Saturday morning pictures was something completely different in 1972. Three members of the town council’s Public Works Committee and a representative from the Town Clerk’s Office had attended an 80 minute showing of a Scandinavian film entitled ‘Without a Stitch’ on the previous Saturday morning. There were no clues as to where the showing was held but Councillor Hudson, one of those to see it, said: “One or two scenes were rather doubtful but the film did have a certain value.” Now, apparently, one or two of the film characters were women who were, according to the councillor, frigid women. Alderman Bailey, another to get a ticket, could only say: “Although in some ways it was instructional, women who are frigid are not likely to come and see the film.”

There was nothing exciting, entertainment wise, for the public to enjoy in Burnley but for those adventurous enough to travel to Nelson, the wonderful El Trop had Big Ears live on stage. On that extravaganza I’m not prepared to comment.

I am though prepared to comment on our game at Hull. This was the day when the club ran a special train for the first time and what a success it was with over 400 Burnley fans travelling over to Humberside to see if we could claim top spot in the league again. I didn’t travel on the train as a group of us were heading straight for London after the game in readiness for our fixture at Orient on the Monday night. It was very much a success though although commercial manager Jack Butterfield did admit there would be some changes before the next excursion for the fixture at Hillsborough against Sheffield Wednesday.

Butterfield confirmed that the young supporters behaved reasonably well but said too many of them were on their feet all the time, and were too boisterous and noisy, although there was never any danger of damage being done to the train. “I realise that there were certain parts of the train where families may have found it unpleasant and some may have doubts about travelling on the train next time,” he said. “But changes will be made and we hope to keep everyone happy in future. This was a first time effort and we have learned a lot from it.” One long haired youngster, watching his first away game, loved it. “I’ve had a great day and I can’t wait for the next trip,” he said, but a concerned supporter of 20 years said: “There should be more control over these long haired youngsters. Their language has been terrible and that’s not good enough when there are women around.”

As for the team, captain Martin Dobson was passed fit and two days before the game manager Jimmy Adamson confirmed it would be the same team although he hadn’t decided who would be the substitute. He said: “Although we have played more games at home this season our away form has been just as impressive. We will be hoping to carry that on from where we left off against Portsmouth. We played well at Hull last season to win 2-1 and we like playing there. We shall be going in the mood to win.”

We were, as it happened, more in the mood than we’d been a week earlier in the 1-1 draw against QPR, but we once again had to come from behind to get a point against Hull City.

The first half was not a lot better. We got off to a decent start but it was soon extinguished with the home side getting more and more into the game. We had plenty of the ball but never really created anything. Hull weren’t much better when it came to carving out chances but they were certainly the more likely of the two sides. They were getting much more of the play and eventually started to put us under some pressure.

We held them off until the half hour when we gave away a really poor goal. Ken Knighton hit a long cross that Keith Newton completely misjudged which left Jimmy McGill with a clear shot at goal. Alan Stevenson saved his effort but couldn’t hold it. The ball ran loose in the crowded box and in the ensuing scramble Philip HOLME back heeled the ball into the net. It could have been worse too within a couple of minutes, but this time Stevenson got down to a Ken Houghton header with Jim Thomson clearing the ball away.

It wasn’t looking good but it seemed to give us a jolt and we did start to get into the game before half time. Even so, Adamson had harsh words for his team in the Boothferry Park dressing room and it is fair to say that whatever he said had the desired effect. We were a different team in the second half. Maybe not back to our best but this was the Burnley we’d become accustomed to. Hull, apparently, were playing as well as they’d done all season according to manager player/manager Terry Neill but they struggled as the Clarets got into gear in the second half.

The stars in that second half were Doug Collins and Dave Thomas, a surprise given that these were the two players very much out of favour ahead of the season. Collins was almost on his way to a lower league club and the relationship Thomas had with the manager saw him out in the cold until a dramatic recall for the opening league game. Now, the side looked as though it couldn’t cope without either and it was Thomas who played a vital part in the equaliser just ten minutes from the end.

We’d put Hull under so much pressure but just couldn’t find that equalising goal until Thomas played a brilliant ball to release Leighton JAMES and he beat John Kaye before shooting past Jeff Wealands. Neill did get back but could only help it into the net, but it was on its way in, James was claiming it and said: “It was going in anyway and who’s going to argue?”

This was Burnley back in form and it augured well. Unfortunately, the dropped point meant we went down another place in the table to third but we remained unbeaten with three wins and four draws from the first seven games.

With Burnley, and leaders Sheffield Wednesday, both being held to 1-1 draws, it enabled Aston Villa, newly promoted from the Third Division to claim top spot after they’d beaten Swindon 2-1 with Andy Lochhead getting one of the goals. We held third place ahead of Luton on goal average. Ours at 2.17 and Luton’s at 2.00 were the best in the league.

Carlisle had the biggest win of the day, beating Cardiff 4-0, and this despite having sold star man Stan Bowles to QPR. He scored for his new club as they beat Nottingham Forest 3-0 to move into 8th place. Millwall were bottom with three points. Cardiff, with one more point, were in the other relegation position behind both Fulham and Orient on goal average.