Burnley must have had something of a hangover from the League Cup defeat at Leeds three days earlier and were nowhere near top form when QPR, a team with just one win although, like us, unbeaten, arrived at Turf Moor. 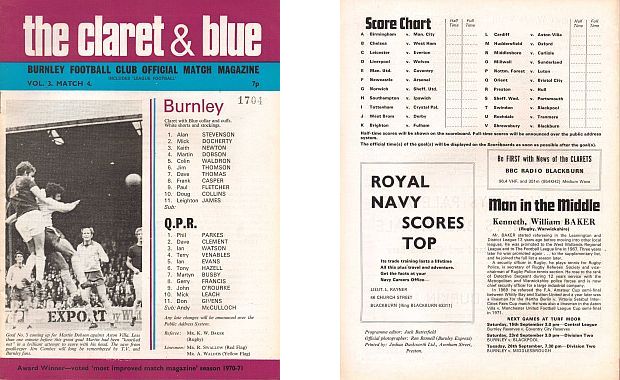 The council were being targeted again during the week as a massive petition was signed and presented in protest at the council rent rises brought under the Government’s ‘Fair Rents’ Act. It was the largest petition, in terms of signatures, ever submitted at Burnley and it led to arguments between two members of the council. “It is six months too late,” said Housing Committee chairman Councillor Frank Booth, but Alderman T. E. Gallagher didn’t agree with him. Gallagher retorted: “There ARE things which the local authority can do, and they must be seen to be done.” Booth saw that the £1 increase had seen families suffer and he added: “We don’t want this to happen. We urge them not to pay it and apply for a rebate.” He admitted they were compelled to implement the new Act but said he hoped the increase could be kept down to 75p per family. “If we succeed in this, we have done all we can for the people of Burnley,” he said.

There was finally some good news at Lucas with news that a vote on the Friday had paved the way for a return to work. The meeting was held on Hargher Clough Recreation Ground but, other than the vote recommending a return to work, there were no details of any changes to the agreement. The dispute had started in June when management offered workers just a 75p per week increase to their wages.

Meanwhile, one Burnley teenager found the most expensive fish and chips in town. The 19-year-old was outside the Hasty Tasty Fish Bar in town when there was a disturbance that brought the police who found a crowd singing and shouting. They asked everyone to move on, as only the police can, but our young man didn’t want to move and continued eating his fish and chips from the plastic tray they’d been served in. He tried to go back in the shop for an extra portion but was told by the police officer that he’d been in once and should not go in again. He must have found this provocative because he pushed the full tray of fish and chips into the copper’s face and was promptly arrested after what the officer described as a violent struggle. In court, Mr H. G. W. Cooper (defending) suggested his client had been provoked. Even so, he was fined £7 plus an advocate’s fee of £2.

There were calls for some guidelines when one disabled motorist was given a £2 parking ticket, and when the ticket had been tucked in to the disabled badge. The man had suffered a stroke and had an adapted car, but the over eager police officer wasn’t interested in that. A traffic department official said: “This type of case is usually left to the discretion of the police officer on the beat. You can’t make hard and fast rules about this type of thing; it always depends on the particular case.” He confirmed there would be a further investigation, and it was expected the fine would be withdrawn.

Councillor E. Hanson told the Community Relations Council for North East Lancashire that he didn’t expect Burnley to receive any of the Uganda Asians expelled from their country. He said an influx of Asians could cause problems, particularly with  housing. He said: “I doubt very much whether any of the Uganda Asians will come into our town. They tend to go where similar families have settled.” Deputy Town Clerk, Mr B. Whittle said he was not aware of any formal approach having been made to Burnley and said the matter had not even been considered by the town council.

It was farewell to one of Burnley’s best known Redhead’s. After twelve years as headmaster of Towneley School, Mr Ignatius Redhead had decided to retire. At a special event organised by the Old Students’ Association he was presented with an eight-track car stereo cassette player.

Burnley Football Club were forced to give assurances to the town council regarding a proposed new Brunshaw Road Stand. The old stand had closed in the summer of 1969, causing a temporary closure of the footpath down Brunshaw Road running the full length of the ground. Unfortunately, due to delays, the footpath was still closed over three years later and this was deemed unacceptable by the council. When asked by Town Clerk Mr C. V. Thornley, the club confirmed that it intended going ahead soon. And so the footpath remained closed to the public.

Ahead of the home game against Queens Park Rangers, there was some good news for two of our younger players with both Billy Rodaway, who had made his first team debut at the end of the 1971/72 season, and Ray Hankin both getting call ups to the England youth squad.

Our first team, smarting from that cup defeat at Leeds, were preparing for the visit of QPR. The two teams boasted impressive unbeaten records going back to the previous season in the league. Burnley had now played 11 league games without defeat but QPR could beat that with an unbeaten run of 17 games. Burnley had confirmed the only doubt was Martin Dobson who had suffered stud marks on his knee following the challenge from Trevor Cherry in the cup defeat. It forced him off during the second half at Elland Road with Geoff Nulty coming on. The day before the game, it was still badly bruised and cut but it was hoped he’d recover enough to continue in the side. He did, and we were unchanged.

Jimmy Adamson said: ” I regard Queens Park Rangers as a top half of the table side, and they always give us a hard match. They played well at Turf Moor last year and were one of the best sides to visit us. It is most important that we get back to our winning form again after Wednesday’s defeat at Leeds.”

Unfortunately, we found neither the form nor the result, and were somewhat fortunate to get a point from a jaded performance that was nothing like the sort of form we’d shown in previous weeks. And things could have been worse had we not defended resolutely. We lacked the sparkle shown in the run of three successive league wins and it was a deficiency we could ill afford against a strong and very direct Rangers side.

Thankfully, all of the back four played well and in particular the two full backs Mick Docherty and Keith Newton. Burnley’s summer signing Newton provided the steadying influence and Docherty, the youngest and least experienced of the defenders, turned in a courageous performance. Further up the pitch we had little to offer as all our creative players had a collective off day and that, too often, handed the initiative to the visitors who were close to taking a second minute lead when midfielder Terry Venables curled a shot just over the bar.

We were under pressure, but when QPR did get beyond our back four they found Alan Stevenson in form and he made three good saves to keep us level. Even so, it was no surprise when QPR went in front on 35 minutes. It was a well worked goal too. They built up the play down the left before the ball was switched across to the impressive Venables. He split the defence with the perfect pass for Martyn BUSBY to run on and score. It was a massive blow to concede with the goal scored by a player who would don the Claret and Blue seven seasons later in a loan spell.

It looked as though we were facing an uphill battle but, amazingly, three minutes later, we were level and it was all down to QPR defender Tony Hazell. Under no pressure he attempted a ludicrous back pass to goalkeeper Phil Parkes. Frank CASPER didn’t need a second invitation and he nipped in to steer the ball past Parkes and bring Burnley right back into things.

It was all square at half time and five minutes into the second half we won our first corner (QPR had already won seven at this stage of the game). It signalled a bit of a revival for Burnley but it came to nothing and we weren’t really in it until the last ten minutes. Then, we suddenly created three chances. Dave Thomas fired over, Dobson shot just wide and Casper came close to a second only for Parkes to get down and save well. It came to nothing and, to cap it all off, Thomas was booked, having also been booked at Leeds, and was now under the threat of suspension should he collect one more booking.

Overall, it was a poor show by Burnley but it could have been a lot worse. To play so badly and still hang on for a point was very much a quality that is seen in promotion teams. And it was unlikely too many teams would come and play as well as QPR did. Adamson just said: “We had an off day, but QPR played well and that made it even more difficult for us.”

A week earlier we’d gone top of the league having beaten Portsmouth and now we’d lost our place to Sheffield Wednesday who had also beaten Portsmouth 2-1 at Hillsborough. We were a point behind with a game in hand and sat in second place above Aston Villa on goal average. The London clubs were the ones struggling at the bottom with Fulham and Orient in the two relegation places, the latter having replaced Bristol City in bottom place, and Millwall just above them. All three of them had just three points.

Burnley now faced two away games before returning to Turf Moor. On the following Saturday it was Hull and two days later on the Monday night we were to play Orient at Brisbane Road.