Burnley’s chase for the Fourth Division title suffered a setback as we moved into April 1992 with us falling to a 1-0 defeat against Crewe Alexandra at Gresty Road.

Sometimes, a report of a crime or vandalism makes you shudder in disbelief and how sad it was to read that vandals had targeted the Hospice in the grounds of Marsden Hospital on three occasions in just over a week, threatening its very existence. 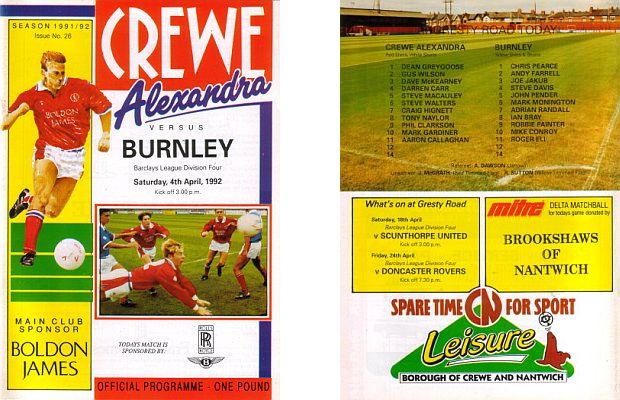 Last week we reported the sad death of Susan Dickens, wife of local GP Gordon Dickens. Susan had been found in her car with a tube from the exhaust pipe that went into the car. The inquest was told that she gassed herself while suffering from depression.

Local man Raymond Ryan was jailed for a total of fifteen months after admitting offences of burglary. The 41-year-old had a drug habit and stole to buy much needed food. He had broken into houses but had stolen items to sell on rather than any food the occupants might have had in their houses.

An 18-year-old also needed food so sold stolen furniture and then scarpered out of town to stay out of trouble. The court was told by Mrs Sue Riley (prosecuting) that Carl Osborn had pleaded guilty only a year earlier to the theft of a bed and wardrobe from a Council for Voluntary Service homeless flat in Trafalgar Gardens. He’d moved to live with his sister in Fleetwood and the court gave him a twelve month conditional discharge.

‘Walk for St. Peter’s’ was set to raise money for the restoration of the parish church and anyone taking part would get a sneak preview of the Burnley Way. The walk was of fifteen miles through the Cliviger Valley and the walkers were warned to bring some weatherproof clothing with rain forecast.

The Burnley v Padiham violence, reported a few weeks ago, had raised its ugly head again with some youths arming themselves with various weapons. This time, even vehicles were targeted with a brick thrown through one car window. It left some of the youths having to report to an attendance centre after appearing at Burnley Juvenile Court.

One poor lady had written to the Burnley Express in despair having been pestered on a regular basis by Jehovah’s Witnesses banging on her door, even at less than sociable times. “When will these people learn that if we wanted to join their religion we would seek them out, not vice versa. Please stop hounding us,” she wrote.

The Eliza Street Action Group had decided to move into the world of music. They’d been presented with a record collection that contained everything from Des O’Connor to Madonna and were now making it available to hire for discos, parties and special events.

Some thirty years ago, books relating to Burnley Football Club were not anything like today and a new book was indeed a rare event. One such event was the publishing of Andrew Procter’s book ‘The Best Ground in the Fourth Division’ which chartered the club from the glory days of Bob Lord and Harry Potts through to the frustrating time in Division Four.

If I asked the question of when Kim Lewis was manager of Burnley, I’m not sure many could answer. It was in this week in 1992 as part of ‘Trading Places Day’ which saw her take over and Jimmy Mullen taking over her job at the Department of Social Security Archives in Nelson to deal with war pensions. Kim said she wrote to Mullen suggesting the idea, never thinking she would receive a reply. But Jimmy said yes and Kim, as well as taking over training for the day, raised £300.

By the end of the week, Mullen was back at the Turf preparing for our away game at Crewe. He said: “They are on the fringe of the play-offs and have everything to play for. It should be a cracking game because if we win it will be another step forwards towards promotion and perhaps the title.”

Unfortunately, any hope of giving our title hopes a boost were dashed when we came home with a 1-0 defeat, ending a run that had seen us win five and draw one of the previous six games.

We had to go into the game without Ian Measham, Adrian Randall, Steve Harper and John Francis. We lost Mike Conroy to an injury in the game, but for much of it we hardly looked as though we would lose. It was, largely, a very disappointing game with little to enthuse the crowd from either side.

It was a game not helped by Jarrow referee Alan Dawson who constantly gave needless free kicks, preventing the two teams from being able to build any momentum.

When Crewe did get forward, we defended admirably, and no one more than Mark Monington who had the task of dealing with Billy Whitehurst who had joined Crewe on loan from bottom club Doncaster; he’d been sent off playing for Doncaster against us in the third league game of the season.

The game had 0-0 written all over it until referee Dawson stepped in with a very poor decision five minutes from time. He somehow saw Mark Yates’ ball winning challenge that took the ball away from Tony Naylor as a foul just a few yards outside our penalty box.

Mark GARDINER took the kick, he got it over the wall into the far corner leaving Chris Pearce with no chance of keeping it out although Crewe manager Dario Gradi pointed the finger at the Burnley goalkeeper for placing too many players in the wall.

We had kicked off with a five point advantage over both Blackpool and Mansfield and it was all eyes on Bloomfield Road where the two met. The two sides had drawn earlier in the season at Field Mill but it was Blackpool who won this one, beating Mansfield 2-1 with two Dave Bamber goals.

That moved them within two points of us but Mansfield remained five behind. Fourth place Rotherham were also surprisingly beaten at Hereford leaving them a point behind Mansfield.