Burnley’s lead at the top reduced as snow forces postponement

Burnley went into the second league weekend in 1973 with a four point lead over second place Queens Park Rangers, but we had to sit and watch QPR reduced that lead to three points with our home game against Portsmouth postponed because of snow. 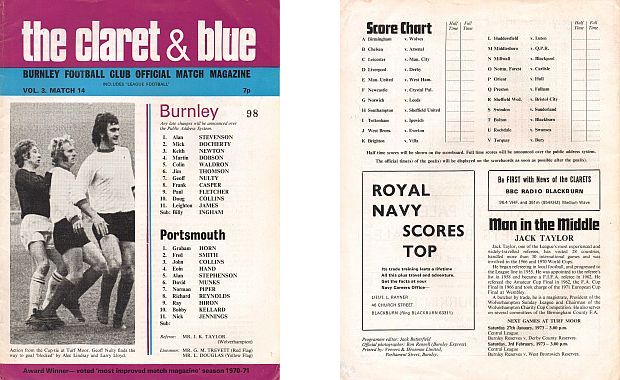 The week had seen some awful news for one Burnley man. On his return home from a visit into town he left his wheelchair in the back yard for twenty minutes, but that was long enough for thieves to sneak in and take it. He needed the wheelchair. He’d lost both legs in 1944 after standing on a land mine in Italy and having the chair was essential to him. The police had no luck in finding either the chair or the culprit but thankfully someone, on hearing the news, was able to help out with the temporary loan of a replacement.

One of Burnley’s longest serving organisations was under threat. The Burnley and District Grocers’ Association was over a century old but member John Slater claimed that it could be disbanded unless new officials and committee members came forward ahead of the forthcoming annual meeting. Mr Slater, the treasurer, admitted: “We have a committee meeting once a month, but at the last one only the president, secretary and one other member turned up,” and confirmed that both the president and secretary wished to resign their positions. He added: “We are looking for people to take an active participation in the running of the association. If we can’t get a committee it is useless.” He was, however, expecting a good turn out at the next meeting which would be on the new Value Added Tax that was to be introduced.

The town was mourning the loss of Rev William John Harris and it was announced that a special memorial service would be held for him. Rev Harris was the priest-in-charge at St. Margaret’s Church, Hapton from 1952 to 1966 and was one of a group of clergy at the pit head at the time of the Hapton Valley Colliery disaster. At his funeral the Bishop of Lancaster referred to the qualities he showed in the aftermath of the disaster in March 1962.

The council were coming under fire for decisions made on what were considered religious grounds. It was thought that their refusal to allow family planning information to be offered to unmarried women was due to the strong catholic membership. Now, they’d blocked a religious meeting in the market square organised by the Free Church Federal Council. At a meeting of the Development Committee concerns were expressed at the dangers which might exist in the square given that it could be already crowded with shoppers. The committee suggesting holding it elsewhere, on a street corner and out of the way. Members of Ightenhill Methodist Church were far from happy and in a letter asked: “Why should the authority refuse this application?” whilst pointing out that other types of meetings had been held, with permission, in the market square. Councillor Kenneth McGeorge retaliated: “Our decision not to grant this was based on the fact that there could be a party of 50 going to the square and then the crowds would gather around and that would make quite a sizeable gathering. It was the weight of numbers and not the form of the meeting which influenced our decision.”

Meanwhile, expelled former leader of the Burnley Labour party, ex-alderman John Cassidy hit out at the refusal to allow him back into the party and also at the fact that the news was leaked by Bert Bolton in the Burnley Express. Cassidy said: “To learn from the Burnley Express of the local party decision leaves a lot to be desired from the local Labour party itself. I have made no press comments since 1966 on any items, party or town council. My membership application was in a private letter which received an acknowledgement from the acting agent that it was receiving attention. I was later informed by executive committee members that I was to be called to a sub-committee meeting. No such meeting has yet taken place.” Bolton was immediately back tracking and claimed that the news had not come from any official source.

Burnley fans thought winger Leighton James had been moonlighting when news appeared that Taffy was regularly attending Evensong at St. Anne’s Church at Fence. It turned out that Taffy was actually a 12-year-old corgi dog and always accompanied two elderly sisters to church. It’s amazing what made front page news in 1973.

A Burnley man was disgusted when he went to get a ticket for the League Liner train for the QPR match on the day after they went on sale, only to find they had been sold out. He wasn’t happy that a lot of the train tickets had been sold to people with no interest in Burnley Football Club or football in general and used the words of Burnley’s commercial manager Jack Butterfield who had said: “We hope that wives and girlfriends of the fans will take the chance for this cheap excursion to London. Even if they are not interested in football they can be guaranteed five hours in London for a shopping spree.” When questioned on it, Butterfield said: “The statements I made about the train were made in view of our experiences with football excursions. For example, the special trains to Sunderland and Aston Villa carried only about 200 passengers, and they cost about £2 less than the trip to QPR. For the Villa trip we had to cancel two carriages for lack of support and even then we had 100 empty seats. We thought we could put this statement out and try to boost sales.” Butterfield offered to take disgruntled fans by coach for £2.45 per person and said that he didn’t think there would be more than ten people on the train who would be going shopping.

Butterfield wasn’t happy about that and he wasn’t happy when referee Jack Taylor, who would referee the World Cup Final a year later, called off Burnley’s home game against Portsmouth. He described it as a cruel blow that had left thousands of match programmes useless and catering arrangements, including the pie order, having to be scrapped at a cost to the club. It was a blow too for 19-year-old Harry Chadwick. The Burnley lad travelled north from his home in Portsmouth, where he was studying at Polytechnic, to watch the Clarets so he could go back and tell all his Pompey supporting mates just how good a side Burnley were. “As I approached the ground I saw people walking away, but I thought I’d make sure,” he said. “I went right to the ground and then saw the notice saying it was off. I was really fed up. I’d been looking forward to the match so much.”

The snow had been heavy and the decision from Taylor was the correct one. Thankfully not too much damage was done to our standing in the league. Second place QPR were only able to pull one point back on us after drawing at Middlesbrough. Of the next three teams, all starting the weekend on 29 points, eight behind Burnley, only Aston Villa won. Oxford went down at next to bottom Cardiff and Blackpool could only draw at Millwall. The other Lancashire team Preston continued their poor run. They lost 3-0 at home against Fulham and that meant just one win in ten games for North End and with worse to come.

For Burnley it was now the big game of the season and the trip to Loftus Road to play QPR. Our unbeaten away record against a team that had lost just once at home. That was, weather permitting, just one week away.