Burnley’s night as we close in on the Toffees 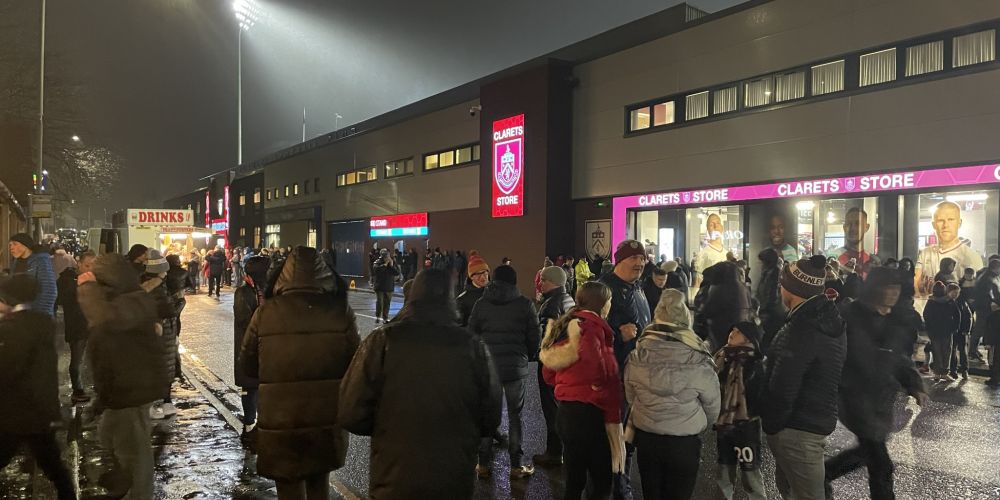 It was our turn to score a late winner last night to give us a 3-2 victory against Everton in the Premier League and move us back ahead of Watford and within a point of last night’s opponents as the battle to try and stay in the league continues.

It was a significant win too in that it was our fiftieth at home in the Premier League with Everton now being included five times in that list, two more than any other club. On a topsy-turvy night, we led through Nathan Collins, netting his first Burnley goal, trailed 2-1 after Everton had converted two penalties, but came back to win it with goals from Jay Rodriguez and Maxwel Cornet.

After two or three recent decent days, weather wise, for home games, it was a bit more Burnley last night with a howling wind to start and some torrential rain in the latter stages, but at least it was fine as we all made our way down to the Turf for a match that was being billed as our most important game for some time. We all know that you can only win three points from any game, but this had the ‘six pointer’ feel as much as any we’ve played at home for some time.

We expected changes to the line up, and there were. Kevin Long, Jack Cork and Dwight McNeil were on the bench and replaced by Collins, Rodriguez and Cornet, the three very players who scored the goals on this important night.

The opening exchanges saw referee Mike Dean in the spotlight, and not for the only time during the game. With retirement on the horizon, you might have wondered whether he would be demob happy but he was happy enough to get his yellow card out twice, firstly for Everton’s Mason Holgate and then Josh Brownhill. I don’t think anyone could argue with either decision.

Embed from Getty Images
No one could argue with the incident two minutes after Brownhill’s card either as the Clarets went in front. Aaron Lennon did well to win a corner on the right against his old club which was taken by Cornet. The flag kick found Collins at the far post. Now, if a central defender is going to score from a corner when the ball finds him beyond the far post, you expect a towering header. Not so, it was a delightful right foot volley from a tight angle. Collins seemed to enjoy it; the Turf Moor crowd definitely did.

We needed to keep pushing on Everton, a second goal would have been nice but, unfortunately, the lead lasted for just six minutes or so. Anthony Gordon got into our box on the right and went down in a challenge from Ashley Westwood. Dean clearly looked for help from his assistant on that side; the assistant said penalty. It’s soft in my view, probably one that is not given more than it is but there was no way Darren England on VAR would have considered overturning it. Richarlison stepped up with his stop/start run up and sent Nick Pope the wrong way.

Everton seemed to gain control for a while after the equaliser although they didn’t threaten our goal too often other than one effort which Pope saved. Then disaster struck although it wasn’t immediate. Vitalii Mykolenko went down in the box as he tried to get past Lennon. He wanted a penalty but Dean said no. Now I really don’t understand VAR. Yes, Lennon did make contact and as such it was a penalty, but they keep telling us VAR isn’t there to referee games, that a decision like this will only be changed if it is a clear and obvious error by the referee. However, England suggested Dean go over to the monitor and from that moment you knew what was coming and Richarlison repeated his previous penalty to give Everton the lead.

It was hard to take but we made every effort to get back level before the break, winning a number of corners. They came to nothing and it was Everton who led as we went in for the break.

Embed from Getty Images
There wasn’t any real early threat that it might happen but then it did happen with one of our own drawing us level. People will talk about Jay Rod scoring the goal, and rightly so. They’ll also mention the superb contribution from Charlie Taylor, and rightly so. But we have to include James Tarkowski in any description of this goal.

It all comes from an Everton clearance that finds Tarkowski on the left hand side. His touch isn’t the best but then he does unbelievably well on the left hand touchline to hold off Dominic Calvert-Lewin before turning superbly to push the ball forward for Taylor. Taylor goes past Jonjoe Kenny and makes his run forward. He looked as though he might have taken a touch too many but he got it spot on, got to the line and pulled it back for Jay, who had found himself space, to hammer home.

With over half an hour still to go, could we go on and win it? It was Everton who took a grasp of things and they had a couple of half chances. We were still in it and started to make changes. On came Matt Lowton for Connor Roberts who had suffered a difficult night. Then Matěj Vydra replaced Wout Weghorst before, with around five minutes to go, McNeil came on for Lennon who had run himself into the ground.

As McNeil came on, Everton had a throw on the left hand side. It led to the winning goal. They worked the ball to Kenny in the centre and around 25-yards out. Tarky, who was outstanding defensively on top of making that contribution towards the equaliser, stepped up again to play a major part in the winner. He saw the danger and raced twelve to fifteen yards towards Kenny to block the ball. Not content with that, he then chased the ball out to the left and played the ball right footed down the pitch.

England’s brilliant ball playing goalkeeper Jordan Pickford came chasing out and with that wonderful quality he possesses with his feet, he hoofed the ball into the Longside. Jay Rod took the throw in to Taylor who crossed the ball immediately. Ben Godfrey’s pass to Vydra was perfect. Vyds did really well to get the ball back from the line and there was Cornet, having found space for himself to crash the ball home with his left foot.

Embed from Getty Images
Turf Moor lifted. Cornet led the players into the Jimmy Mac/Bob Lord corner. The crowd celebrated. From being nervous, I was on my feet, punching the air and doing daft things that someone my age probably shouldn’t be doing. You get so caught up in it, you don’t see what anyone else is doing but over on the bench, the television cameras picked up Lennon, Bobby Thomas and Ashley Barnes celebrating behind Evertonian Ian Woan who was giving every impression he was enjoying the moment.

A quick look at the clock showed there were still around four minutes remaining plus whatever was to be added on at the end, and that we found was four minutes. Now, we really did have something to hang on to. We got to the ninety minutes without an issue but there were two scares to come in stoppage time. Solomón Rondón, who had come on just after the winning goal, was set up by Calvert-Lewin on the edge of his box. Thankfully, the shot went just wide of goal. Soon after, Pope failed to gather a ball but then recovered quickly to gather it.

It was all over. We’d got the win we desperately needed and the celebrations started. What we have to remember is it’s a win, nothing more, a win and three points. Yes, it’s a potential lifeline. Defeat last night would have had the fat lady gargling but at least she’s back in the dressing room with this result.

But we are going to have to do it again and again and again if we are to survive. We are still in the bottom three, we’ve still only won four games all season, and there is still a lot to do before we can even think of Premier League football in 2022/23.

It was a fantastic night though, wasn’t it? We weren’t brilliant, we’ve probably played better than that and lost, Goodison being one possible occasion, but it’s all about the points.

Embed from Getty Images
But, inspired by the brilliant Tarkowski, with Cornet, Rodriguez, Taylor and Lennon also standing out, we are still in there with a shout.

A fiftieth home Premier League win, an eightieth in total, a fifth home win against Everton and we’ve now beaten them more than any other team in this league at home and in total.

Sean Dyche says it has to be parked quickly, and it has. But we can at least enjoy the next couple of days enjoying the result and revelling in that match winning moment when Maxwel’s left foot fired the winning goal into the net.